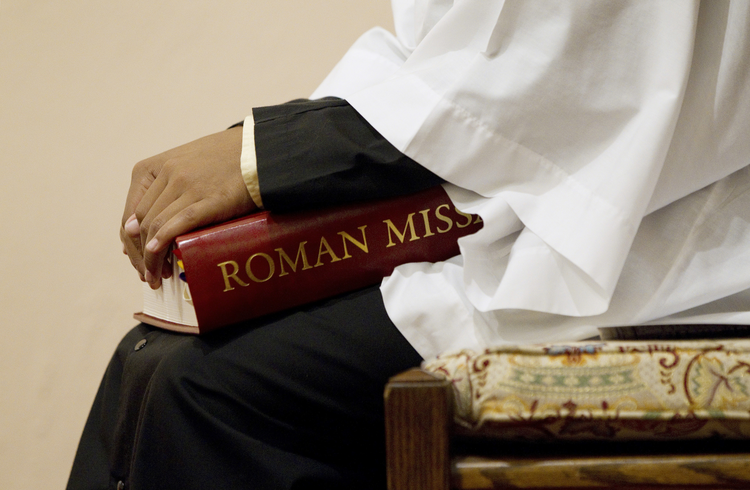 An altar server holds a copy of the new English translation of the Roman Missal during Mass at St. Joseph's Catholic Church in Alexandria, Va., Nov. 27, 2011. (CNS photo/Nancy Phelan Wiechec)

Pope Francis has ordered a review of “Liturgiam Authenticam,” the controversial decree behind the most recent translations of liturgical texts from Latin into English and other languages. The commission, established by the pope just before Christmas, is also tasked with examining what level of decentralization is desirable in the church on matters such as this.

The mixed commission includes bishops from all the continents. Significantly, Pope Francis appointed Archbishop Arthur Roche, the secretary of the Congregation for Divine Worship and the Discipline of the Sacraments, to be its president. The English-born archbishop is the number two official at the congregation; he has more experience in the liturgical field and a more open approach to liturgical questions than its prefect, Cardinal Robert Sarah.

The Vatican has not provided details on the commission, which is scheduled to hold its first meeting soon. Nor has it published the names of the commission’s members.

Why Pope Francis is right to revisit the new Mass translation
Michael G. Ryan
Francis had two main reasons for setting up the commission, according to informed sources. First, in line with the Second Vatican Council, he wants to give greater responsibility and authority to bishops’ conferences. He stated this clearly in his programmatic document, “Evangelii Gaudium,” when he wrote:

The Second Vatican Council stated that, like the ancient patriarchal Churches, episcopal conferences are in a position “to contribute in many and fruitful ways to the concrete realization of the collegial spirit.” Yet this desire has not been fully realized, since a juridical status of episcopal conferences which would see them as subjects of specific attributions, including genuine doctrinal authority, has not yet been sufficiently elaborated. Excessive centralization, rather than proving helpful, complicates the Church’s life and her missionary outreach (No. 32).

In this context, the question that arises in terms of the liturgy is to clarify what is the role of the bishop of Rome in preserving unity in the church, given that Liturgy, the Roman rite, creates unity in the Latin church. The commission will address this issue.

Second, some bishops' conferences are unhappy with the translation of the Roman Missal required by “Liturgiam Authenticam.” They consider it too rigid and do not accept that there is such a thing as “sacral language.” They charge that “Liturgiam” seeks an almost literal translation of the Latin liturgical texts into the vernacular or local language of the different countries, often with unsatisfactory results. The Japanese, for example, had a long-running battle with the congregation over who should decide what is an acceptable Japanese translation of these texts. They and several other bishops’ conferences, are clearly unhappy with the directives of “Liturgiam” and the level of centralization involved in it.

Archbishop Roche, who was for 10 years chairman of the International Commission for English Language in the Liturgy, addressing the Canadian Conference of Catholic Bishops in September 2014, said the major difference between “Comme le Prévoit” (1969), which governed translation for the first liturgical books after the Second Vatican Council (1962-65), and “Liturgiam Authenticam,” which has since determined the translation of the Roman Missal in English, French and some Spanish-speaking countries, “was that the Holy See in its directives opted for a shift of the guiding principle of translation from that of ‘dynamic or functional equivalence’ in 1969 to the principle of ‘formal equivalence’ in 2001.”

He explained that “dynamic equivalence” was achieved when a translator detached the “content” of an utterance from the “form in which it was expressed.” But this approach has become “outmoded,” he said. Over the last 40 years, specialists in language “have become more aware that the form we choose for an utterance is itself expressive of our purpose in speaking.” The Holy See in “Liturgiam Authenticam”opted for “the formal equivalence,” he stated.

The new commission set up by Pope Francis will review this whole matter, together with the issue of inculturation and the question of what decentralization is desirable in matters relating to the liturgy.

Editor's note: The title of this article has been updated for purposes of clarity.

The headline is quite a bit misleading isn't it. Pope Francis hasn't ordered a review of the New Translation of the Roman Missal, but rather a review of the current guiding document for translations of Liturgical Rites. I am confused at why a venerable Catholic News Source such as America would be so very honest in the article and misleading in the headline, but I guess that is what sells papers.

I never understood why ICEL did not use the prayers of the
Anglican Church or at least consult them - [ Did they ? ]
as they are far more moving and frankly beautiful then what
ICEL produced.

I don't know what will happen to the Liturgical Prayers in English,
but I hope that a more 'poetic' rendition is produced, if changes are
made.

I do not support what PF is doing on this. It won't matter anyway since nobody uses missalettes anymore and liberals discourage their use in the education among children and young adults.

With the four marks of Christ's Church being "one, holy, catholic and apostolic" any changes in the Missal must ask questions pertaining to this truth.

Will the changes achieve more unity - in both time and space, more "one" - as I believe the latest English language translation did?

Will more changes teach us through the liturgy the meaning of our purpose and relationship to God?

Are we being loyal to our Communion of Saints and the Suffering Church by these changes?

And does "experience" trump "holiness" when it comes to the people chosen to guide and preserve our liturgy in this brave new world?

Since the Eucharist is the heart of the Church, why not focus on significant pastoral problems: why aren't people coming to Church? why don't homilies connect with people's lives? Have we forgotten the principle of Pope Paul VI that "the liturgy is for the people and not the people for the liturgy?"

This article just makes me even more blessed by my Anglican patrimony(and grateful to pope Benedict) when I attend mass at my local parish and hear the current translation of the Eucharistic miracle reduced to such a pedestrian, graceless prose, at times verging on the heretical. Lacking a cranmer for each vernacular used in the church universal, I can appreciate the wisdom of retaining the latin to preserve both the precision and unity of the faith and the Faithful.

In synodality Pope Francis has not only emphasized the role of bishops in decision making, he has emphasized also the importance of consulting the laity. Hopefully a reform of the liturgical translation process will include not only asking for opinions of people in the pews but also “test marking” changes before final implementation of any new translation.

Father Michael Ryan suggested a trial implementation in his 2009 article which resulted in a petition signed by thousands including myself. We should not wait until Liturgiam Authenticam is revised to begin our consultation process with the people about translations.

People already have had experience with both the Old and New Missals. We should also give them some trial experience with some or all of the 1998 Missal approved by the bishops but not by Rome. Do people have much of preference for one translation over another? Do people have preferences for some parts of one Missal over another? Do they like certain Eucharistic Prayers? certain collects? Our findings could help decide how to make better translations.

We should give up on the notion that if we just explain to people why they should understand and like a translation, then they will end up understanding and liking it.

The real problem, jack, is the dichotomy between high and low church goers. Some find God in the formal, some, in the informal. I suspect, just as we now have numerous Eucharistic prayers, we will, in time, see different liturgies. And while I appreciate that many see having a single liturgy as something that unites us, I'm not sure it really matters. There were many rites in the early Church, in the different patriarchates; all of them were valid. And all of them were Catholic.

The problem isn't formal or informal. It's very simply bad English composition. The present translation wouldn't get a D in an English comp class. The translation could be in accurate, modern, and beautiful English if one didn't have to be a slave to literalism.

Where outside the Anglican Church is such a English Translation ?

Serious language isn't a bad thing, the occasional use of words as obscure as "prevenient" notwithstanding. My issues with the new Missal are twofold:
1. It wouldn't pass a basic grammar course. Many of the prayers include sentence fragments and run-on sentences. They should have let a 4th grade teacher proofread the thing because the translators missed basic grammar in school.
2. Many of the prayers are impossible to read aloud or have language that is hard to hear when spoken aloud. Sure, people can follow prayers in portable Missals or Missalettes, but part of the goal of public prayer should be the intelligibility of spoken words. I can (and frequently have) recast the same serious words in clear and understandable sentences. I think many of those translators never tried to say those words out loud.

If any review of the Missal addresses those concerns, I'll be very pleased.

Prayers lift our hearts up to Father, Son and Spirit. They must be based on revelation as found in Scripture and dogma, but are not teaching instruments per se. So their composition has to turn to poetry in which we feel the truth of the Son's relation to the Father through the inspiration of the Spirit.