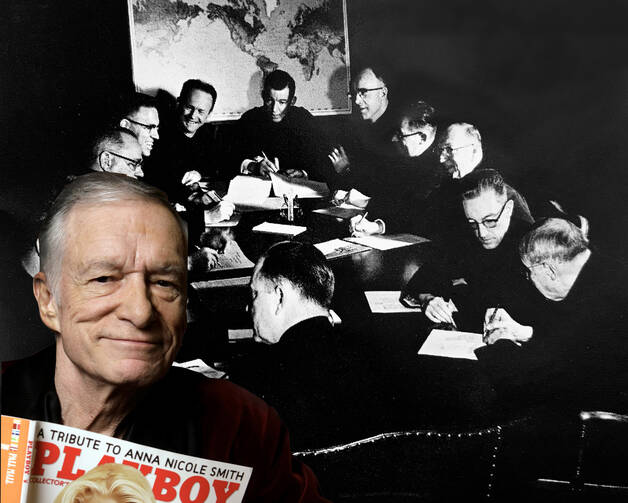 The death on Sept. 26 of Hugh Hefner, founder of Playboy magazine and often recognized as an icon of the sexual revolution, occasioned much commentary on the role of Mr. Hefner and his magazine in the changing mores of American culture since that magazine’s founding in 1953. What follows is a brief Current Comment in America from May 1, 1965, drawn from our archives. The editors stand behind this strong critique of Mr. Hefner’s magazine, and also continue “to smile very cynically” at those who supported Playboy while “orating about free enterprise and the virtues of the American Way of Life.”

Hugh Hefner, a Chicago man, keeps sending us copies of his magazine, Playboy. Apparently he wants us to comment on it. But since it seems that Mr. Hefner's chief purpose in publishing is to turn a dirty joke into a philosophy, we have never found anything that demanded comment by us.

For readers who may be curious, let us explain that Playboy regularly prints a page of smutty stories, some smutty cartoons and a bawdy story from the classics. There are also several pages in color of photographs of nude or nearly nude women, posed in a way that suggests that Mr. Hefner is suffering from an infantile breast fixation.

What makes Playboy distinctive, however, is "The Playboy Philosophy." This is a series that has now reached its 22nd installment. In it, Mr. Hefner appears as the herald of "The American Sexual Revolution." His message is that all of us, married and unmarried, can live happily in an amoral sexual paradise, if we will only shed our puritanical inhibitions.

...and the American Way

Yet Playboy has a monthly circulation approaching three million. Persons as distinguished as Jean-Paul Sartre and Mortimer Adler have contributed interviews and articles to it. Hollywood actresses who, if not distinguished, are at least well known, have appeared (c'est le mot juste) in its photographs.

And Big Business supports it handsomely. In the May issue, for example, we found full-page ads from Firestone tires, Van Heusen clothes, Budweiser and Anheuser-Busch beer, Tareyton, Pall Mall, Viceroy and Winston cigarettes, U.S. Rubber, Timex watches and several leading brands of whiskey. If this is what businessmen mean by a sense of responsibility to the community, we are going to smile very cynically the next time we hear one of them orating about free enterprise and the virtues of the American Way of Life.

Hmmm. Mr. Hefner certainly milked Big Business and the American "way of life" for all it was worth. RIP.

In my day, young men explained their interest in Playboy was all about "the articles". NOT! I never found one young man who could provide discourse on the tenor of the "articles". This article gave me a chuckle! RIP, Hef! God blessed you with a long life!
Carol Cox

I can identify at least two of the Jesuits in the photograph accompanying this article, and will state, for the record, that Playboy was available in the Reference Room of the Fordham University Library in the late 1960's. You just had to ask. I do not know whether the magazine had been previewed by the black-robed gentlemen of Loyola-Faber Hall.

I do not know what moral frame of reference a typical Jesuit can use to condemn the vile evil of pornography or even the vast amounts of money pornography uses to promote the abortion industry.

The Jesuit who taught us "marriage & sexuality" at my Jesuit h.s. in the 1970s used to distribute copies of the "Playboy Advisor" and lead us in a critique!

Hefner led a crusade without a pilgrimage. He was, on a massive scale, the true believer, cut off from God, the drunk who says "everyone needs to believe in something, I believe I'll have another drink." Sometimes a long life is a blessing, sometimes a curse unless the increasing pain brings a dramatic change. It will be interesting to learn more about how he faced death.

I am reminded of the headline that appeared in Iran when the Shah of Iran died: Shah Dies; Goes Straight to Hell.