What has the Catholic Book Club been reading recently? Novels. 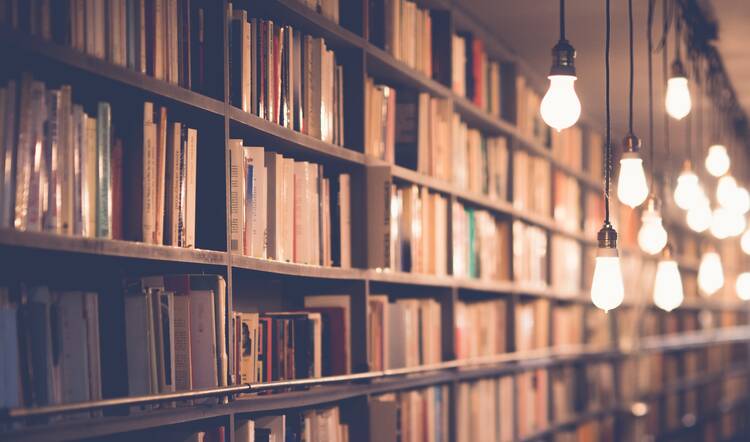 Our two most recent selections in the Catholic Book Club are both set in the American Southwest and are both deeply Catholic in their themes and their characters; both are also novels that their authors developed from previously published short stories. But that may be where the similarities end.

The first, A Canticle for Leibowitz, by Walter Miller Jr., is a 1959 science fiction tale about a desert monastery that was founded to preserve knowledge after a nuclear holocaust. The second, The Five Wounds, by Kirstin Valdez Quade, is a 2021 novel (developed from a short story published in The New Yorker in 2009) about five generations of a Catholic family in northern New Mexico, who find life a tumultuous succession of moments of grace and of tragedy.

Our Catholic Book Club moderator, Kevin Spinale, S.J., crafted essays for both books, including questions for contemplation and discussion. Our Facebook page continues to be the gathering place where our more than 7,000 Catholic Book Club members discuss each book.

A Canticle for Leibowitz

Our discussion of Walter Miller Jr.’s classic tale got off to an entertaining start with a surprising confession from Father Spinale. “I am sorry, but I do not like science fiction. So perhaps a fruitful way to initiate discussion on this novel is for me to admit that I do not really like it,” he wrote in his interpretive essay for A Canticle for Leibowitz. While he found it “prescient” and “clever and funny in spots,” he needed convincing that the book“is, in fact, a great novel.”

The easy if snarky answer—that Father Spinale is a philistine—made some sense to me. I have considered Canticle a brilliant and thought-provoking story ever since I first read it as a freshman in high school. But some of our fellow readers, many of whom had also read it years ago, also had mixed reactions to the book. “Unlike Father Spinale, I do like science fiction,” wrote Gerald Moss. “Like Father Spinale, I disliked this novel and don’t understand why it has endured. It frustrated me; it annoyed me; it seemed to have been the longest read I have encountered in quite a long time.”

The easy if snarky answer—that Father Spinale is a philistine—made some sense to me.

When Canticle first came out, David Doel noted, three novels about the end of the world as we know it were popular: Aldous Huxley’s Brave New World, George Orwell’s 1984 and Nevil Shute’s On the Beach. “A Canticle for Leibowitz had just been published in 1959 and is good enough to have made the list,” he commented. “But Canticle is far more than a dystopian novel. This time [reading it], I paid more attention to the Catholic aspects, and doing so made the book more interesting to me.”

Miller had been a tail gunner in the Second World War and participated in the controversial American bombing of the Italian abbey of Montecassino. Profiles of him after his death (he died by suicide in 1996) suggested that his experiences in World War II had given him a haunting sense of an apocalypse in humanity’s future. “It struck me that this veteran’s life after the war was devoted to working through the reality of nuclear weapons and war,” commented Rita Rings. Miller converted to Catholicism after the war, and it is clear in Canticle that he considered the Catholic Church to be the world’s sole bulwark against madness and decline.

No surprise, then, that Miller found his world once again turned upside down with the many changes in the church that followed the Second Vatican Council. “Even though theologians, Scripture scholars and liturgists had been at work for years prior to Vatican II, it took place and went into effect at a time when cultures around the world were experiencing drastic changes,” commented Sally Meyers. “Add a stable church into the mix and it was too much for many staunch believers to understand and accept.” That seems to have been the case for Miller, who eventually drifted away from the church.

Liz Latorre noted that the dominant theme of the book was that “human intellectual progress will inevitably lead to destruction because of a decrease of reliance on God and an increase of reliance on humanity.” David W. Madsen commented that Miller had a fairly accurate (if acid) take on human nature: “George Santayana cautioned that history serves no purpose unless people learn from its lessons. Miller seems to suggest (and, ironically, history would bear him out) that we do not learn and so it does not provide ‘a stay against self-destruction.’”

I have considered A Canticle for Leibowitz a brilliant and thought-provoking story ever since I first read it as a freshman in high school.

We just recently began our discussion of our latest selection, The Five Wounds, by Kirstin Valdez Quade. Readers of America may be familiar with Valdez Quade, as her writing has been the focus of several reviews and profiles, including a recent review of The Five Wounds by Jenny Shank. “While the short story [from which the novel is developed] dazzled with its humor, verve, bold use of Catholic imagery and shocking action, the novel settles in,” Shank wrote. This longer work “lets the virtues and contradictions of its characters unfurl and offers profound insights about how the stability of even a tension-filled family can serve as a saving grace for each member.”

The protagonist of the story is Amadeo Padilla, a local ne’er-do-well who wants to be like Jesus, though in his own special way. He was “no silky-haired, rosy-cheeked, honey-eyed Jesus,” writes Valdez Quade. His brief moment imitating Jesus is not followed by grace and peace; rather, for Amadeo and his family, “the dramatic moments in life merely set the stage for the hard, quotidian work of dealing with their aftermath with purpose and without despair,” Shank writes.

While Valdez Quade’s stories frequently feature Catholic characters, her own relationship to the church is complicated.

Some readers found Valdez Quade’s frank depictions of sex in the novel off-putting, and some thought the hard-bitten characters did not seem likely to find redemption. Others argued that Valdez Quade presented believable characters with complicated lives. “I enjoyed it,” wrote Brian Lennon. “I kept thinking the ladies at my church would probably not appreciate it, but it’s real life.” Jeanne Blum thought the same. “It really presents a beautiful insight,” she wrote, “but it all comes together toward the end. I loved the character development, which kept me engaged.”

While Valdez Quade’s stories frequently feature Catholic characters, her own relationship to the church is complicated. “I consider myself Catholic,” she told Shank in a profile in America in 2018. “That history, that tradition, feels very central to my understanding of my family history and my place in the world. On the other hand, there are a lot of ways in which I feel that it’s a pretty inhospitable religion for me. I think that’s another tension that I keep returning to. What does it mean for me to love this religion that I don’t always feel wants me?” So perhaps that is one more similarity between A Canticle for Leibowitz and The Five Wounds. The authors of both cherish so much about their faith that it inevitably becomes central to their fiction, and yet they struggle with the tensions of being a Catholic in the modern world. Very Graham Greene.

We try to mix it up in terms of genres in our Catholic Book Club selections. In the past we have covered biographies, histories, books of poetry and plenty of novels. We are always interested in suggestions for what to choose next. Are you interested in reading and discussing with us? Join the Catholic Book Club at americamagazine.org/catholic-book-club or on Facebook at facebook.com/groups/americacbc.

This article also appeared in print, under the headline “What has the Catholic Book Club been reading recently? Novels. ,” in the Fall Literary Review 2021, issue.