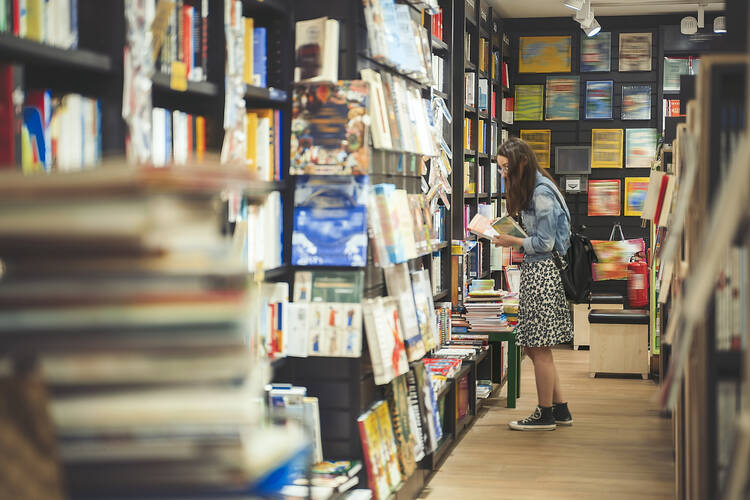 In August of this year, the Catholic Book Club hit a new benchmark for our Facebook discussion group. We now have over 6,000 members. Not bad, considering that three years ago at this time, the group had four members (all editors at America). Combined with the Catholic Book Club newsletter, which reaches almost 12,000 readers every week, we have strong evidence that despite many reports of its demise over the past decade, a culture of book reading continues to flourish.

Of course, let us be honest: Most of us have been more or less trapped in our homes for seven months. Thank God for books.

We have strong evidence that despite many reports of its demise over the past decade, a culture of book reading continues to flourish.

While we try to rotate among different genres in our four selections for the Catholic Book Club every year (from novels to biographies to memoirs to short story collections to poetry and more), our summer and fall selections for 2020 offered two books about the American South by men named John. How did that happen?

A Confederacy of Dunces by John Kennedy Toole

But that is the only thing they had in common. Over the summer we read and discussed John Kennedy Toole’s darkly comic novel about New Orleans, A Confederacy of Dunces, and this fall we are finishing up our discussion of John Howard Griffin’s Black Like Me, a short memoir about his journey through the American South in the 1950s after artificially darkening his skin to appear as a Black man. Both books received critical acclaim upon their initial publication but seem to have lost some of their popularity in recent decades.

Our Catholic Book Club moderator, Kevin Spinale, S.J., wrote several interpretive essays about both books to spur discussion and bring up aspects of each one that might be of interest. While many Catholic Book Club members had read one or both texts in high school or college, Father Spinale was approaching them for the first time, and we benefited mightily from his fresh take and penetrating insights.

A Confederacy of Dunces

Father Spinale noted the dark times swirling around us all during the Covid-19 pandemic, and confessed that “comedy is what I need. But I bet you need some humor right now as well—instead of The Brothers Karamazov, instead of Moby-Dick.” He also promised that “if you stick with it, this novel will make you laugh spontaneously, without any self-regard and without any need of knowing precisely what is beyond the pale at this moment in our cultural history. Everything is beyond the pale in the New Orleans of A Confederacy of Dunces, and that is what makes the book so darn funny.”

Catholic Book Club members tended to agree, though some found the main character of the novel, Ignatius J. Reilly, to be shot through with melancholy beneath the comedy—perhaps an unconscious reflection by Toole himself on the melancholy of his own life. Reilly’s sturdy frame and absurd appearance—including a hunting cap and a bushy mustache—have been memorialized with a statue in New Orleans. “Throughout the novel, he waddles around bursting at the seams in gluttonous sloth and saturated with letters,” wrote Father Spinale, “and, by ‘letters’ I mean that he has stored up in himself words and ideas that make him a truly ‘lettered’ person.”

For some readers, Toole’s novel has not aged well. “My chief reaction to the Toole book is shame,” wrote James Speer. “I am ashamed that when the book came out I would undoubtedly have been amused by Toole's mean parody of gay people and his equally mean parody of African Americans.”

For others, the novel kept its magical quality. “I finished A Confederacy of Dunces this morning. It was a wild read,” commented Mary Ellen Holm. “What an imagination Toole had! The ending made me wonder if he would have written a sequel if he had lived. It also seemed hopeful.”

"Everything is beyond the pale in the New Orleans of A Confederacy of Dunces, and that is what makes the book so darn funny.”

While admitting that John Howard Griffin’s memoir made him deeply uncomfortable at times (in part because the notion of appearing in blackface has become unthinkable for most people six decades later), Father Spinale also praised Griffin for his passions. “He possessed some truths about justice, some facts about the furious violence enacted on Blacks in the South, and he was hungry for a fuller truth. His hunger hounded him so much that he was insistent in carrying out this project, even to the point of death,” Father Spinale wrote. “Griffin’s unquestionable sincerity, sensitivity to justice and humility in the face of the truth of the experience of Blacks in the South should be enough for us to hear his story with an open mind and reflect on the profound but partial truths that he discovered in his temporary Blackness.”

Griffin’s book was more than just an account of a personal journey of discovery. At the time of its release, it destroyed for many readers the illusion that the American South offered a “separate but equal” society where Blacks and whites coexisted in harmony. Rather, the world Griffin reported on was one of visceral hatred of African-Americans, especially Black men, and where life was an endless repetition of insults, hassles and public reminders that African-Americans were to consider themselves second class.

Many readers commented that they had read the book decades ago and were moved once again by Griffin’s stories of the hatred and misanthropic behavior he encountered on his journey—as well as by his reflections on family and hospitality. “I just finished reading it. Supposedly I read it when I was 12 years old and I never forgot it, but rereading it was like I had never read it before. It was riveting,” wrote Beth Cioffoletti. “Even though ‘progress’ has been made with civil rights, I don’t think that we’ve dealt with the deeper problem of racism, prejudice, white supremacy. Black Like Me seeks to explore this in ways that few books since have.”

“Even though ‘progress’ has been made with civil rights, I don’t think that we’ve dealt with the deeper problem of racism, prejudice, white supremacy. Black Like Me seeks to explore this in ways that few books since have.”

As with A Confederacy of Dunces, not all readers found that the book has aged well. “It is likely that the omission of black women from his account was due to his lack of interaction with them, which would have been in keeping with the cultural norms of the time,” wrote Liz Latorre. “However, reading it with 21st-century eyes, the lack of black female perspective and experience is glaringly noticeable.”

In his reflections, Father Spinale noted that Griffin’s Catholicism (he had converted a few years before) permeates the book:

He clearly carries the enthusiasm of his conversion into his writing. Early on in his time in New Orleans, he asks where he might find a Catholic church. He speaks of praying to St. Jude when he is threatened with violence at the hands of a menacing white stalker during his first few days posing as a Black man. He often praised a Catholic openness to desegregation in and around New Orleans, citing his relief that a Catholic bookstore in New Orleans was decent enough to cash his traveler’s checks when no other shop in the city would provide such a service to a Black man.

But Father Spinale follows that up with a troubling question: “Does Griffin go too easy on the Catholic Church? Was the Catholic Church in the South and elsewhere that tolerant and supportive of Black people and the pursuit of civil rights?”

We are now talking about what our next book should be, and we are always interested in suggestions for what to choose. (Don’t recommend your own book.) Are you interested in reading and discussing with us? Join the Catholic Book Club at americamagazine.org/catholic-book-club or on Facebook at facebook.com/groups/americacbc. Happy reading!

This article also appeared in print, under the headline “The Catholic Book Club explores two literary classics,” in the Fall Literary Review 2020, issue.