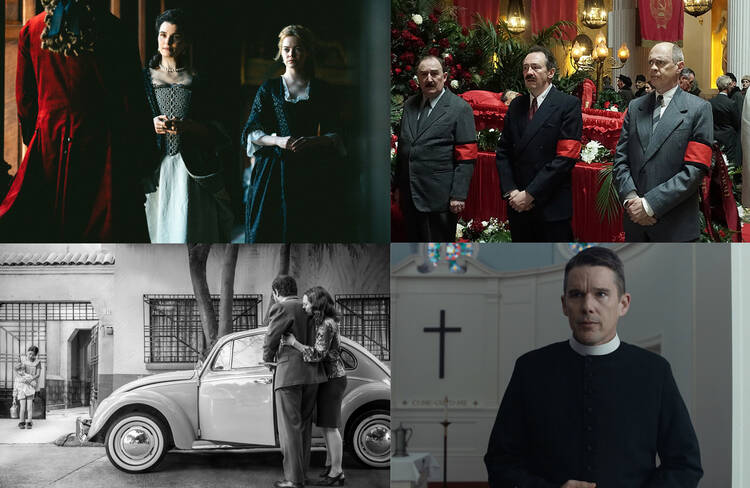 Clockwise from top left: "The Favourite," "The Death of Stalin," "First Reformed and "Roma"

By most accounts, 2018 has been among the better film years in years. One esteemed colleague has been compelled to make his top 10 into a top 20—and it is hard to argue, especially when your own list does not include “Black Panther,”“Puzzle,” “Isle of Dogs,” “You Were Never Really Here,” “The Sisters Brothers,” “Sorry to Bother You,”“A Star is Born,”“Eighth Grade,”“RBG,” “Dark Money,” “If Beale Street Could Talk,” “Blindspotting,” “A Quiet Place,” “Can You Ever Forgive Me?” “Won’t You Be My Neighbor?” and “Pope Francis: A Man of His Word.” (Please: Catch up with all these films.)

The best movies from this year were about family, both natural and improvised.

But like last year, the mandate here is a Top 9, for several reasons. One, nothing concentrates the mind like a deadline and the task of boiling a year’s worth of movies down to the number of innings in a baseball game. Two, these lists are totally subjective anyway—why nine? Why 10? Why isn’t “Spider-Man: Into the Spider-Verse” on the list below? Partly because the theme that emerged was that the best movies were about family. So why isn’t “Incredibles 2” on the list? Well, partly because the director Brad Bird’s Ayn-Randian message is something I would, personally, prefer to leave out.

And three, because the idea of “best of” lists has changed in the Age of Clickbait. Many of them, published by outlets both legitimate and otherwise, are intended to create chatter online. The governing ethic often seems to be, “Let’s leave out [fill in much-praised film, artist, album, novel] and see if we can create a Tweetstorm.” That, or critics look at what their colleagues have chosen and choose to go another way—either to give worthy movies attention or because film critics are naturally a perverse collection of individuals. Or they want to recognize certain films and thus influence the annual awards-giving, which is a whole other corrupt kettle of fish.

Nothing concentrates the mind like the task of boiling a year’s worth of movies down to the number of innings in a baseball game.

That said, much of the following may be predictable, especially for the reader who has been charting the meta-critical tide. It shouldn’t really be otherwise:

“Roma.” Visually majestic, emotionally lacerating, the director (and writer and cinematographer) Alfonso Cuarón’s gently devastating domestic epic is ostensibly about a family, one living a comfortably bourgeois existence in Mexico City during their country’s “dirty wars” of the early 1970s. The heart of the story, though, is Cleo Gutiérrez (Yalitza Aparicio), who Cuarón has said is based on the woman who raised him. She is a maid, a cleaning woman, a nanny to a disintegrating couple’s four children—but is she a member of the family? Almost no one has mentioned first-timer Aparicio as a contender for best-actress awards this season, but such is a testament to her performance as a woman marginalized, and Cuarón’s intention of creating a naturalistic portrait of an overlooked life (albeit with a few magical adornments). “Roma” is also a film about film, in its way, and razes the argument that the big screen can be replaced by Netflix.

“Shoplifters.” Winner of the Palme d’Or at Cannes last year, “Shoplifters,” by the great Japanese humanist director Hirokazu Kore-eda, has been described as being about a “crime family,” though the crimes are hardly of Corleone caliber. And what the movie is really about is love. In a squatter’s shack on the margins of Tokyo, a makeshift family manages to eke out an existence. The “father,” Osamu (Lily Franky), a barely employed construction worker, and Shota (Jyo Kairi), a handsome young boy of uncertain parentage, operate their own very effective system of subsistence stealing. Osamu’s wife, Nobuyo (Andô Sakura), works a lousy job at a laundry; Grandma (the late Kiki Kirin) collects support checks and gently extorts money from her ex-husband’s children; and Aki (Mayu Matsuoka) works at a kind of Japanese peep-show. Then, one night, Osamu collects an abused 4-year-old named Yuri (Miyu Sasaki), who has been left outside in the cold, and Yuri gets to join her first real family—one whose feelings of mutual affection and regard are fierce. A bittersweet film of great tenderness and charity, “Shoplifters” might make a great Christmas movie, so Christian is its message.

“Support the Girls.” At a Hooters-style restaurant on the side of a suburban Texas highway, Lisa (Regina Hall) is manager, mission director and den mother to the beautiful but often clueless young women who make up her staff and who inflict more dysfunction on her already complicated life. Hall’s performance is a tour de force, and the supporting cast—Haley Lu Richardson as the relentlessly upbeat Maci, Dylan Gelula as the too-savvy Jennelle, the rapper Shayna McHayle as the statuesque Danyelle—are uniformly terrific. The message of Andrew Bujalski’s highly entertaining feature is largely about improvised families—where we find them, how they work. But it is also about the compromises that women make, almost unconsciously, just to get through the day. That and the microaggressions they suffer at the hands of an opposite sex whose members are utterly oblivious. “Support the Girls” is ostensibly a comedy, but its closing moments are stunning, imposing a note of existential tragedy.

“The Death of Stalin.” In the pages of America magazine, it was called “a mashup of the Marx Brothers and Alexandre Solzhenitsyn” (by me). “The Death of Stalin” is among both the blackest and giddiest of comedies and easily the most horrifying: In the wake of Stalin, his heirs presumptive—a politburo “family” that includes Nikita Khrushchev (Steve Buscemi), Georgy Malenkov (Jeffrey Tambor) and Vyacheslav Molotov (Michael Palin)—go into contortions trying to figure out how to outmaneuver each other while staying out of the way of the firing squad. Armando Iannucci (“In the Loop”) has made a very amusing movie but also one that leaves a chill.

“The Favourite.” Queen Anne (a great Olivia Colman) is in thrall to her close confidante Lady Sarah, the Duchess of Marlborough (Rachel Weisz), when along comes the fallen but noble-born Abigail Hill (Emma Stone) who inveigles her way into the unhappy sovereign’s heart. While it is being marketed as a wacky comedy, “The Favourite” is really an art film, with a bawdy sense of humor and three great performances.

“Nancy.” Andrea Riseborough (who is also in “The Death of Stalin”) is one of the finer young actresses on screen and in “Nancy”—the feature debut of director Christina Choe—she puts flesh on an enigma: Nancy, whom we know to be an unreliable source, sees a report about a 30-year-old case of a little girl gone missing and decides she is the missing girl. Her relationship with—or betrayal of—the still-grieving parents (Steve Buscemi, J. Smith-Cameron) seesaws between the appalling and the heart-breaking. And Riseborough is superb.

“First Man.” The deep space in “First Man” is between Neil Armstrong (Ryan Gosling) and his wife (Claire Foy), his kids and mankind in general, in this memorable portrait of the first man on the moon by Damien Chazelle (“La La Land”). Despite the iciness of Armstrong, it is a remarkably intimate movie.

“First Reformed.” Paul Schrader’s portrait of a minister at a crossroads (played by Ethan Hawke, who may be on his way to an Oscar) is an unnerving parable of belief, a scathing autopsy of lost faith and, in its unruly way, perhaps the most spiritual film of the year.

I beg to differ. Making movies is a business. The reason that the awards shows have taken such a dive in ratings is because the movie industry nominates films with which it try to preach its liberal beliefs at the audience rather than nominating the movies that audiences loved to spend their $$$ on. The REAL Top 9 of 2018 so far?
RANK DOMESTIC OVERSEAS WORLD "" TITLES (2018-2018)

I also disagree on the one film that I have viewed, The Favorite.

Favourite was a major disappointment. Green Book should be at the top of the list.

Favourite was a major disappointment. Green Book should be at the top of the list.

I have to agree with this great article. Moreover, I find it an excellent essay example every student should follow. Writing is a difficult process, and those who decided to be fully involved in it, must understand the main simple rule. Hard work and constant pushing yourself to write - that's a way to go in this case.

What about The BlacKKKlansman? I thought it was a masterful portrayal of the nexus between a true story of infiltration into the KKK and the rise of hatred and racial discrimination in society today.

What about The BlacKKKlansman? I thought it was a masterful portrayal of the nexus between a true story of infiltration into the KKK and the rise of hatred and racial discrimination in society today.

None of this is life or earth shattering, except perhaps the ones designed to be propaganda. Rather these lists are a way to reveal what is important to the person who concocted them, but always fun to read and think about.

I was just completed watching "Black Panther" Movie fifth times. And its still give me lots of boost for a disabled man. Moreover, My best partner was there.

Basically, I'm unable do anything without that. Do you like to read about my best partners review? Here Mobility Scooter Review

Description of “Roma” is really intruguing. I`m sure that I must see this movie. Thanks for the top!

some of the films are missed by me but i am going to watch all of these for sure, FakeApp Download