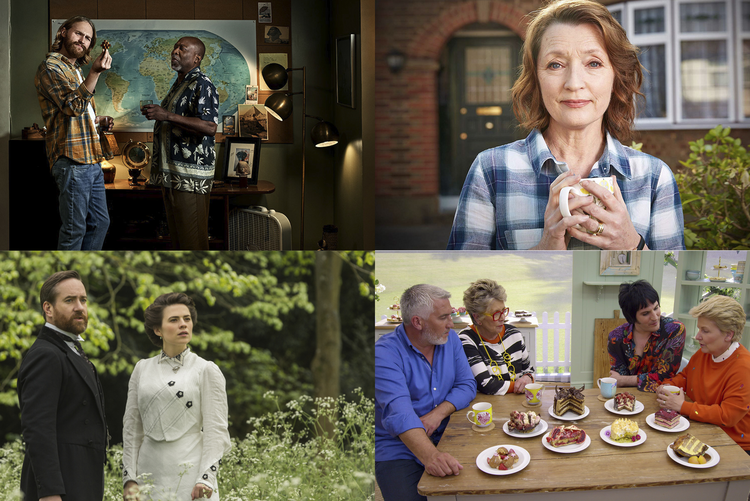 Between full-season drops and an absolute glut of programming, there is less and less sense of a shared television experience anymore. That’s why I relish a good “best of” list. It’s like a moment where you find someone else out there in the ether who gets you. They saw that thing you loved and they love it as much as you did. Plus, they saw a couple other great things that you might have missed. As one friend put it to me, a “best of” list is like a treasure map to other brilliant adventures.

But in this era of Too Much TV, where to start? “Killing Eve,” BBC America’s new Sandra Oh–led series about a low-level intelligence agent investigating a female assassin, and “The Bodyguard,” Netflix’s six-part series about a British secret service agent dealing with domestic terrorism in London, are both insanely compelling. “The Crown” on Netflix produced yet another cracker of a season, with profound meditations on religious vocation, family and forgiveness. “The Good Fight” on CBS’ streaming service continues to capture what it is like to live through the Trump era better than any other show, followed closely by Netflix’s fierce and funny Cuban-American re-imagining of “One Day at a Time.”

The very best television is like an Ignatian contemplation: It tells stories that offer us some kind of gift—an insight or encouragement for our lives.

“Atlanta,” “BoJack Horseman,” “GLOW, “The Good Place,” “Better Call Saul” and “Stranger Things” all continue to shine, as well. And the new season of “Doctor Who,” with Jodie Whittaker as the series’ first female Doctor, has brought a fun, fresh perspective to the series (and a 20 percent leap in viewers).

But for me, the very best television is like an Ignatian contemplation: It tells stories that offer us some kind of gift—an insight or encouragement for our lives.

With that in mind, here are eight great shows from 2018.

The Great British Bake Off (Netflix). On the surface “Bake Off” is just another cooking competition show, with 12 ordinary people from all over Great Britain vying to be named the country’s best baker. But what makes the show something special is its unexpected kindness. On “Bake Off,” people help each other. They encourage, they cheer on, they even step away from their own work areas to pitch in when someone is struggling. The baking is central (and astonishing—this year’s contestants are dough-wielding wizards), but really I find it a show about friendship and community. At the end of each finale, the three finalists walk from the cooking tent onto a field where hundreds of their friends, family and previously eliminated peers have a picnic in their honor. It’s a little glimpse of what life can be when we choose to be in it together.

In “Bake Off,” the baking is central, but really I find it a show about friendship and community.

Lodge 49 (AMC). A cast-adrift 20-something surfer dude in Great Recession-era Southern California stumbles into a fictionalized version of the Masons, complete with mythical quests and the secrets of life—an unusual concept, to say the least. But in its first season “Lodge 49” has proven to be one of television’s more timely and hopeful shows. Rather than some spooky secret society, the Lodge is made up of ordinary people, mostly middle-aged, working-class victims of our gig economy. Even as they face so many reasons to despair, from loan sharks and entitled young people to bad bosses and death itself, each of them still wants to believe in something more—true love, their own potential or that the struggles of their lives may be to some greater purpose.

Sean “Dud” Dudley enters their lives as a sweetly aimless, beer-swilling Don Quixote, seeing in the Lodge not just a social club but a pathway to destiny. And whether the Lodge actually does hold mystical secrets or not (it does, and they are hilariously weird), the world and those around him are transformed by his happy, hopeful faith.

Even as they face so many reasons to despair, each of the characters in “Lodge 49” still wants to believe in something more.

Mum (PBS). A quietly funny “will they or won’t they” tale, “Mum” tells the story of Cathy, a newly widowed 59-year-old woman, and her longtime family friend Michael, who has always secretly loved her. The show is deeply indebted to “The Office,” with Cathy and Michael’s search for meaning and love constantly impeded by her ridiculous family: the son who likes to make fun of Michael and walk around in very short boxer briefs; his clueless girlfriend Kelly, who has absolutely no sense of propriety (“Is it hard being a widow on Valentine’s Day?” she asks Cathy one month after her husband has died); her deaf, foul-mouthed parents-in-law; and others.

But where “The Office” includes us in on the joke with Jim and Pam—they look to the camera knowingly with amusement and frustration—Cathy and Michael instead mostly hold their tongues. This is family; you can’t just write them off. And that small difference creates an unexpected space for empathy. Kelly may be relentlessly annoying, but she is always trying to connect. Cathy’s refusal to dismiss her family or other people she encounters as a punch line gives them a pathos and beauty that otherwise we would not have seen.

“Mum” is deeply indebted to “The Office,” with Cathy and Michael’s search for meaning and love constantly impeded by her ridiculous family.

Counterpart (Starz) and Star Trek: Discovery (CBS All Access). Shows that deal with alternate realities tend toward the cartoonish; see: Spock with a goatee. But this year both “Counterpart” and the fantastic new “Star Trek” series used the concept of alternate realities to offer fascinating explorations into the self.

In “Counterpart,” J. K. Simmons stars as Howard Silk, a meek paper pusher in a mysterious government espionage agency who discovers a parallel Earth in which his double is a master spy. The story unfolds like a great John le Carré novel, with the two men, confidants and antagonists, shadowboxing on a murky Cold War–like stage. Over the course of the season each finds the experience empowering. Seeing another version of himself allows each Howard to imagine more for his life than he had previously thought possible.

Both “Counterpart” and the new “Star Trek” series use the concept of alternate realities to offer fascinating explorations into the self.

The “Star Trek” franchise has always loved a good “Mirror Universe” episode, its cast of heroes forced to confront fascist nightmare versions of themselves. But “Discovery”—which has offered a wildly inventive, emotionally complex new take on the “Star Trek” franchise—brings the idea of a mirror universe to a whole new level, trapping the crew in a violent, racist parallel universe for a third of its season, forcing them to do terrible things there in order to survive and uncovering disturbing truths. Rather than mirroring its own prime reality, the show becomes a potent mirror of our own, the way bigotry and solidarity exist side by side not only in our own communities but within ourselves. We all have that capacity to be the monsters we fear.

Howards End (Starz). With its focus on the relationship between a brilliantly talented young woman and a condescending businessman, E. M. Forster’s novel seems remarkably prescient. And yet rather than leaning too far into the moment, the Oscar-winning writer Kenneth Lonergan offers a vivacious, joyful adaptation that in many ways challenges the antagonisms of the world today. As played by the brilliant Hayley Atwell, Margaret Schlegel is endlessly optimistic without being even slightly naïve, a woman who decides to take an understanding view of people’s choices even when they hurt her. We can fight, we can mistreat each other terribly, but Margaret is persistently forgiving, because she sees it all against a broader horizon of family and love.

The Handmaid’s Tale (Hulu)and The Marvelous Mrs. Maisel (Amazon). Okay, so nearly every “best of” list is going to mention both of these shows. From acting to writing to cinematography, the TV adaptation of Margaret Atwood’s novel about a near-future in which a conservative religious sect takes over the United States and reduces women to either wives or wombs is the best drama on television, by a large margin. Meanwhile “Maisel” is a zesty latter-day “Mary Tyler Moore,” with the fantastic Rachel Brosnahan as a 1950s New York housewife who leaves behind her cheating husband to pursue a career as a stand-up comedian.

Both shows present women trapped in societies whose social mores prohibit them from expressing themselves. What makes the series so compelling is their characters’ refusal to be silenced. “Handmaid” has revolutionized the idea of the voiceover, using it not to deliver exposition but to give protagonist June Osborne a chance to be by turns furious, hilarious and devastating. “This could be an Airbnb,” she muses at one point of the room she is trapped in. “Not a great one. Three-star reviews maybe. ‘Amazing house, tons of character, nice view of the yard. Owners are super polite but creepy as #@*!. Some ritualized rape required.’”

“Men are afraid women will laugh at them,” she tells us in another episode. “Women are afraid men will kill them.”

“Maisel” isn’t quotable in the same way, but watching Midge step on stage and start unloading about her life offers a very similar sense of catharsis. Sometimes you don’t even know you are being silenced, the show suggests again and again, until you see someone else really speak.

Thanks--I need to read more, but I need these t.v. suggestions!

"Marvelous Mrs. Maisel" didn't make your list? Do you live in a cloistered convent?

This is Us.........
Wouldnt this be on most lists for great TV?? Well written and acting that is top notch. Not cliche.

This is Us. I agree with Joan. Shocked its not on this list.

Incredible that The Marvelous Mrs. Maisal is mentioned. Yes, well produced and yes, Rachel Brosnahan is a great actress. But there isn't a single redeeming character in the show. All are self absorbed as the lead character is a narcissistic egoist who essentially abandons her two children to go our every night and pursue a career in comedy. It also makes Lenny Bruce a charming character out of one of the most foul mouth comedians of all time. If you like hearing the F word and watch decadence depicted in a positive way, this is the show for you.