‘Roma’ is a sumptuous tribute to a serene and holy caregiver 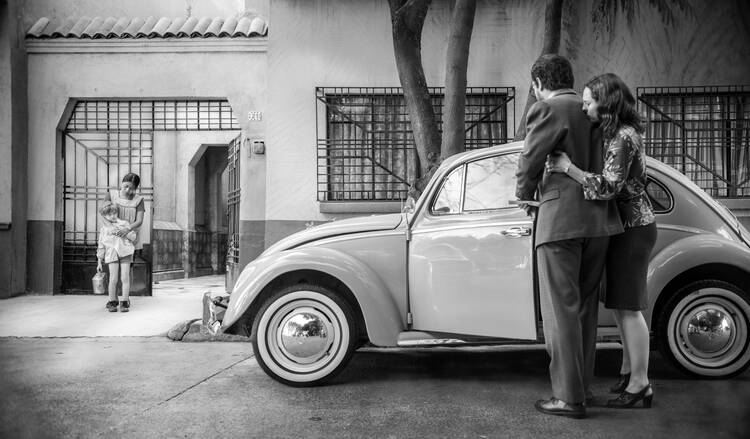 While prepping for the annual film award season fracas, a colleague made a suggestion: “Let’s just give Cuarón everything. Give him Best Actor and Best Actress, too.”

Alfonso Cuarón—whose films include “Gravity,” “Y Tu Mamá También,” “Children of Men,” “A Little Princess” and “Harry Potter and the Prisoner of Azkaban,” and who was the first Mexican to win a Best Director Oscar—does not actually appear in the sumptuous “Roma.” But he wrote it, directed it, co-edited it, executed the glorious black-and-white camerawork and conjured the movie out of his childhood memories, alchemizing them into one of the more emotionally satisfying and visually absorbing films of recent years. I don’t really want to review it. I can’t do it justice. Maybe with 50,000 more words. Or 50 more years.

There is a richness to “Roma” that will likely take multiple viewings to absorb. Every gesture is revealing; every image is a window.

This may be a high-end problem, and in the afterglow of “Roma” such dilemmas should be confronted with the same kind of holy serenity and stoicism shown by the movie’s central character, Cleo, a Oaxacan villager transplanted to Mexico City—and modeled after “the woman who raised me,” as Cuarón has explained. She is played by Yalitza Aparicio, who had never acted before and was discovered by the film crew in her village along with Nancy García who plays Cleo’s best friend and coworker, Adela. (Part of the dialogue is in their native Mixtec.) It is a remarkable performance, devoid of ego, which might sound dubious but isn’t.

Cleo and Adela work as domestics for an upper-middle-class family in Roma, a relatively well-to-do section of Mexico City. It is about 1970, the time of Mexico’s “dirty wars” against student protests and land reformers. The national problems intrude here and there along the storyline of the film, but Cuarón’s point of view is mostly that of a child, which is apt, as the most important characters are literally—or figuratively, or emotionally, or spiritually—children.

The film’s most important characters are literally—or figuratively, or emotionally, or spiritually—children.

“When I was older I used to be a sailor,” says little Pepe (Marco Graf), “but I drowned in a storm.” It is one of several out-of-time recollections delivered by the young boy and ignored by the adults around him. This should not be: Pepe’s utterances are like Dostoyevsky’s epileptic fits—harbingers or echoes. Nor should they be ignored by us: For all his film’s cinema-verité surfaces, Cuarón is weaving together fragments of dreams with his domestic disorder and stillbirths, and murder and dog poop, and economic inequality. He is also paying visits (and tribute) to films that preceded him and which themselves are dreamlike. A Fellini-inspired carnival, to cite one example. Or a Christmas party at a house where animal heads—including those of dogs—decorate every room and the guests blast away with pistols at their not-so-imaginary class enemies, recreating in their monied barbarism the rabbit-hunting sequence in “The Rules of the Game.”

For pure magic, there is the moment when Cleo announces to her soon-to-be-absent boyfriend, Fermin (Jorge Antonio Guerrero), that she is pregnant, as they sit in the rear of an old-style movie palace. There is a vintage Mexican comedy playing out on the screen, with a Mexican tragedy playing out in the seats, and the viewer is suspended between worlds and sensibilities, time and space.

‘The Favourite’: a delicious period tale of women and power
John Anderson

There is a richness to “Roma” that will likely take multiple viewings to absorb. Every gesture is revealing; every image is a window. Gratitude, one supposes, is due to Netflix, where the film is about to premiere and which will enable those in areas where “Roma” would never crack the local multiplex to see it. At the same time, feh to Netflix, because this is a film that should never be seen anywhere but on the largest screen available. Its availability in the living room is bound to keep people home, even in major movie hubs.

Cleo might know how to cope with such a grave problem. During a visit to Fermin, who is training with a large group of young men on the outskirts of town, a martial-arts expert in a silly superhero suit prepares them for the amazing thing they are about to see. He then stands blindfolded, one foot resting against the opposite knee, his hands clasped above his head. You think this is nothing, he asks? Try it. Everyone does. And as the macho posers around her topple like babies, Cleo stands in a perfect, motionless state, focus and inner peace being her natural state. She is the center of a universe.

The movie is fantastic. I am working from home as a freelancer for writing service https://papersgram.com/assignment-writing-service/ and have enough time for my hobbies and watching movies is one of them. I watched this masterpiece several times and every single time I found out something new. One of my favorite thing is the storyline of the movie: so unique and complicated.