‘The Favourite’: a delicious period tale of women and power 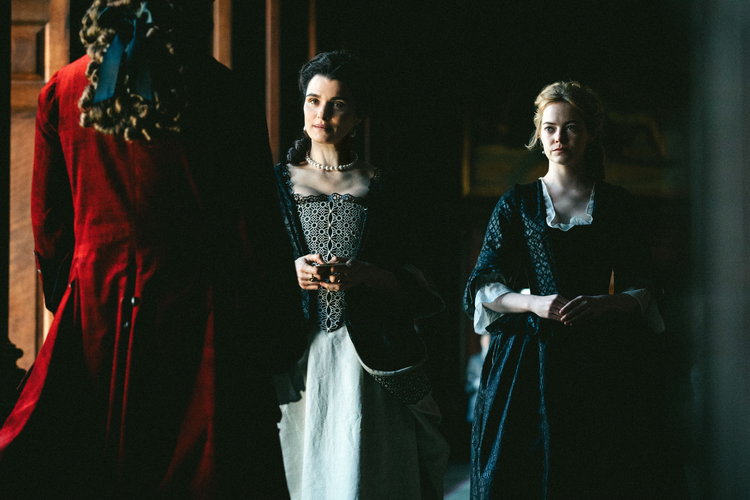 “Love has limits,” says the duchess. “It should not,” says the queen. If one had to distill the sentiments of the deliciously rude, faux-historic black comedy “The Favourite” down to bumper-sticker size, this early exchange might well be the ticket.

The ticket? “That’s the ticket!” says Queen Anne (Olivia Colman), echoing Jon Lovitz, who wouldn’t come around for another couple of centuries. We are not exactly in Stuart-era England.

So where are we? Strolling the grounds of a facetious not-yet-United Kingdom sprung from the highly inventive and cinematic mind of Yorgos Lanthimos, the Greek director who has delighted and bewildered various audiences most recently with “The Lobster” (2015) and “The Killing of a Sacred Deer” (2017). With “The Favourite,” Lanthimos uses the short but contentious reign of Queen Anne (1701-1707) to construct a film that is, on one hand, the story of a cruel and boisterous love triangle and, on the other, a study of unbridled ambition and ruthless power.

The short but contentious reign of Queen Anne serves as a study of unbridled ambition and ruthless power.

The culprit is not the queen herself (historically, the fiercely Protestant daughter of the fiercely Catholic James I), but rather the two fact-based women vying for her affections and favor: Sarah, Duchess of Marlborough (Rachel Weisz), who controls the unhappy, unpretty queen with a combination of fawning blandishments, verbal abuse and sex; and Abigail Hill (Emma Stone), a noble woman fallen on hard times who inveigles her way into the heart of the sovereign through sympathy, calculation and…sex. That the rivals clash does not begin to describe it.

Amid all the intrigue and vulgarity is a running (one might even say runny) joke, namely a portrayal of rampant vulgarity, predatory sexuality and general vileness in an era usually portrayed as a golden age of elegance and refinement. The powdered wigs here look like vermin condos; the mud is always something else. Lanthimos is up to his trademark directorial mischief, too. One is never unaware that one is watching a film; the photography is gorgeous but achieved mostly via wide-angle or even fish-eye lensing. The optics keep you off balance.

“The Favourite” is a story about love—love of self, largely, but also Queen Anne’s hunger for affection.

And the anachronisms run amok. “Maybe she’s gone to Blenheim,” worries Queen Anne, when her bestie, Lady Sarah, goes missing for several days, as a result of Abigail’s scheming. Oh no, says her high treasurer, Baron Godolphin (James Smith): “Nothing but forest there now.” The year is approximately 1701 or 1702; the construction of England’s Blenheim Palace, family home to the Churchills among other things, was begun in 1705. Baron Godolphin is clairvoyant, or Lanthimos is pulling our leg.

Speaking of legs, the queen’s are ulcerated, as a result of her gout. (Abigail’s herbal treatment is one way she worms her way into Anne’s affections.) Sarah also suffers a nasty wound, during an ill-timed horse ride that lands her in a brothel. Infection is a concern—but would anyone know what it was?

The portrait of Anne—Colman is magnificent—is a mix of petulance, wrath and pathos. Encountering a young servant during a particularly nasty fit of pique, Anne unloads: “Did you look at me?!! Look at me!! How dare you!! Close your eyes!!” Elsewhere, she unburdens to Abigail, while demolishing us: “I lost 17 children,” she says. “Some were just blood; others were with me for a while.” It’s a shattering moment, partly because it is historically true, partly because Lanthimos hits us with it in the middle of a story largely about comically heartless humanity.

“The Favourite” is a story about love—love of self, largely, but also Queen Anne’s hunger for affection and how power serves as no substitute for that. The dualities provided by Weisz and Stone are wonderful: hot vs. cold, scheming vs. naïve, with ambition ultimately winning out. But Anne is something else, in every sense of the phrase. And so is “The Favourite.”

Qyite an enjoyable read. I must see the movie. But Anne were such a Protestant, why did she meet with and consider Catholic James III for her successor? I hope this director goes on to do a movie about her cousin the appointed royal Governor of New York.

Anne was Queen of England, Scotland and Ireland (1702–1707) and of Great Britain (1707–1714). Trevelyan's classic The Stuarts unravels the threads whereby religion was the idiom of politics and politics the idiom of religion in a period that significantly shaped the future for both Britain and the USA. The political experiments during The Commonwealth under Cromwell resonate through the thoughts and writing of Jefferson. The Hanoverian, protestant, succession underwrote the practice of constitutional monarchy. A Stuart restoration in 1714 would have meant a return to attempting to reimpose the forms of absolutism that led to that dynasty's double downfall in the bourgeoise revolutions of 1649 and 1689 and, almost certainly, a third civil war against their despotic rule. It should be remembered that, in Anne's reign, John Churchill's wars destroyed the continental power of the ancien regime under Louis XIV and ensured that liberal democracy would survive in the world's most advanced economies, Britain and Holland. 1776 was very much the completion of those political principles, protected by the moat of two oceans.

Unfortunate typo in the article. Anne's fiercely Catholic father was James II, not James I. I enjoyed the review, though, and look forward to seeing the film. Regarding the earlier comment, Anne did indeed want her half-brother, the would-be James III, to be king, but only if he set aside his Catholicism - which he never did.