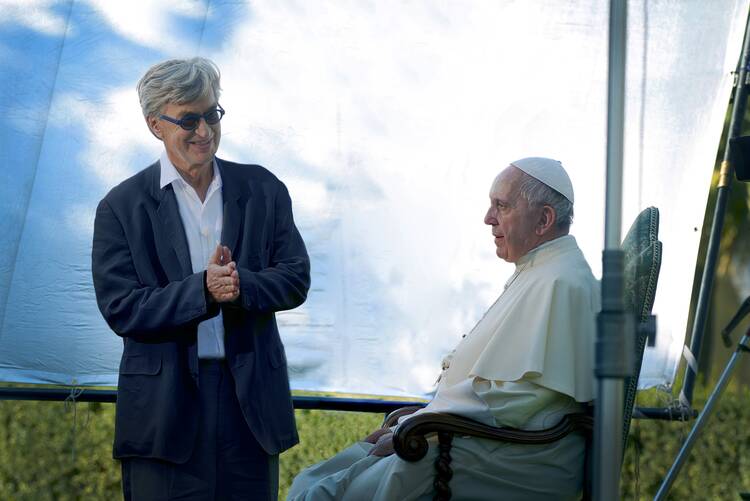 German filmmaker Wim Wenders is pictured in this undated photo with Pope Francis during the production of his documentary film, "Pope Francis — A Man of His Word." (CNS photo/Vatican Media, handout)

“God sends us the pope we need for each stage of the earth,” says the smiling, elderly Sister Maria Eufemia Goycoechea, who has known the former Jorge Mario Bergoglio since 1969 and about whom she knows a few things. Among them? “His life itself is a sermon.”

That sermon is the spine of “Pope Francis: A Man of His Word,” a gently delivered but radical portrait by the German director Wim Wenders (a venerated figure himself in the world of cinema), one that delivers the message and person of the pontiff through interviews, observation and a sometimes stinging portrait of the world against which Francis has poised himself. Using scenes of St. Francis of Assisi (played by Ignazio Oliva) as a way of introducing and contextualizing the pope’s “revolutionary”—and fundamentally Christian—position on power and poverty, Wenders asks the question: “What is it going to take to blow a Franciscan breeze into the world again, other than courage and humility?”

A Jesuit, it seems.

“A Man of His Word” is not a biography. Other than one remarkable flashback to 1999—of the then-archbishop of Buenos Aires delivering a sermon on love at the Plaza de Mayo—the movie lives in a present that begins on March 13, 2013, at the Vatican. “The conclave had to give a bishop to Rome,” the newly elected pope tells an oceanic horde in St. Peter’s Square. “And it seems my brother cardinals went almost to the end of the world to find one.”

The humor is ever-present and often rich in the pope’s public comments. (At the Festival of Families in Philadelphia, he addresses the criticism that an unmarried cleric cannot counsel on family life: “Sometimes plates can fly,” he observes, to laughs. “And children bring headaches. I won’t talk about mothers-in-law.”)

In a new documentary from Wim Wenders, Francis is sober, consoling, occasionally sad and always jesuitical.

But when he addresses what might be called the tent poles of his papacy, Francis is sober, consoling, occasionally sad and always jesuitical: He quotes Fyodor Dostoyevsky (“Why do children suffer?”) and tries to answer the question: Because people are free. And free to love. And love requires choice. And only people who are free can choose.

His message is always simple but sometimes deceptively so.

Wenders, who is Catholic and whose films include that cult favorite about angels, “Wings of Desire” (1987), had remarkable access to the pope, did multiple interviews in multiple locations and seems to have had time for Francis to relax and address the issues at hand with satisfying thoroughness and care. Fans of nonfiction film (Wenders’s documentaries include “The Buena Vista Social Club”) may be reminded by the director’s narration of his compatriot, Werner Herzog. The way Francis addresses the camera suggests the American documentarian Errol Morris and his Interrotron, which allows a director to make eye contact with a subject as the subject looks directly at the camera. The pope seems to be addressing the viewer directly, quite obviously the point.

The humor is ever-present and often rich in the pope’s public comments.

Less obvious is the way Wenders creates a running commentary behind Pope Francis’ words through his editing and the silent reproof of his cuts. When the pope is seen addressing crowds of the poor in Brazil, the Central African Republic, the monsoon-ravaged Philippines or a detention center in Naples, the crowds are delirious and grateful. When he addresses the United Nations on climate change, the membership can barely pay attention; the delegation from China looks particularly bored. When Francis visits an American jail, the detainees are rapt; when he addresses the U.S. Congress, members are more than happy to leap to their feet at a mention of “the land of the free and the home of the brave.” When he insists on an end to the gun trade—“which we all know is simply for money...money drenched in blood”—the Republican membership stays pronouncedly put.

When Pope Francis says that the more power one has “the more you are called on to be humble,” Wenders gives us—what else?—glimpses of Vladimir Putin and Donald J. Trump. “Pope Francis: A Man of His Word” is a film made by a fan, and a fan in sync with his subject’s theology—but who has no delusions whatsoever about what both of them are up against.

Wonderful hagiography and a delightful public relations piece well in keeping with the Jesuit Tradition.

When has Francis ever been "consoling" towards the children abandoned as a result of his publicly soft attitudes about marital commitment?

Here is what he has sad about children in marriages that are suffering breakdown:
https://www.ncronline.org/blogs/francis-chronicles/pope-francis-tells-parents-be-mindful-childrens-suffering