Review: ‘Sorry to Bother You’ is a satirical look into what it means to be black in corporate America 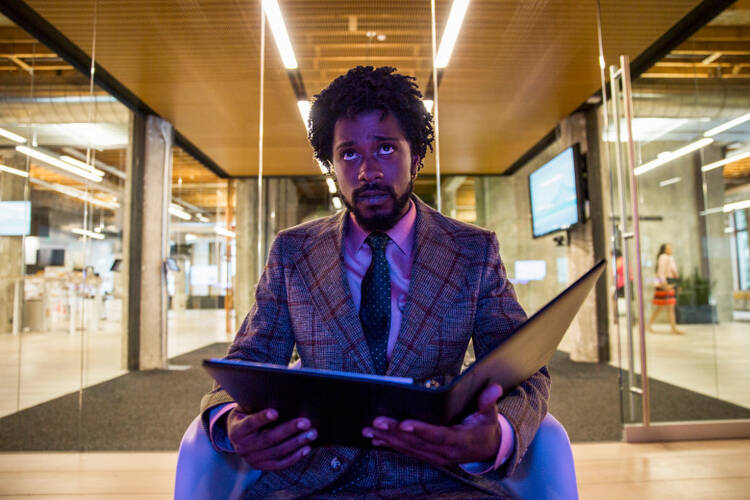 If I had to sell you “Sorry to Bother You,” the corporate satire/horror film from writer and director Boots Riley, I would say it’s like if “Brazil” starred the lead in Ralph Ellison’s Invisible Man. Or should I say it’s like “Get Out” with a touch of “BoJack Horseman”? Like “The Stuff,” but with slavery instead of killer yogurt? If all these mashups give the impression of a disjointed, howling, passionate and sharply observed adventure that skids at overload speed straight for Bonkersville, I hope I can convince you to—wait! Don’t hang up the phone! There is so much more to this offer!

“Sorry to Bother You” takes place in the recognizable near future, where Cassius “Cash” Green (Lakeith Stanfield, all slumped shoulders and mistrustful hangdog shamble) hopes to move out of his uncle’s garage and make a home for his artist fiancée, Detroit (Tessa Thompson). He takes a job at RegalView, a telemarketing company with a labor rebellion in the cubicle farm—and some sinister secrets in the “Power Callers’” penthouse. The plot is pretty straightforward: Cassius joins the strike, but when the company offers to make him a Power Caller on the strength of his “white voice,” he leaps onto the corporate ladder—and climbs it vertiginously straight down into Hell.

What sets “Sorry” apart is the vividness of its world and the sharpness of its creator’s commentary. Something is always taking place on the edge of the frame, like the tent cities Cassius passes on his way to work; or in fleeting, unmentioned details, like Cassius riding his fiancée to work after his car breaks down. This is a world where reality TV is a political battlefield and obscenity is the sole remaining American vernacular. (Detroit’s T-shirt, which reads “THE FUTURE IS FEMALE EJACULATION,” should come free with a purchase of a “pussy hat.”)

What sets “Sorry” apart is the vividness of its world and the sharpness of its creator’s commentary.

Some of the jokes are homey—the balled fringe decorating the inside of Cassius’s borrowed car; the angry confrontation that devolves into an exchange of compliments. Some are familiar, but no less effective, tropes of racial humor. Cassius’s friends say he is not black exactly, more like “Lionel Richie black”; white people love rap music because it lets us yell the n-word. But most of the film’s gags and punchlines feed the film’s two themes: Wealthy people oppress the poor more with their promises than with their threats; and the system will find a way to commodify and co-opt every form of protest you try, but by the same token, you can repurpose every loss or degradation into a source of strength.

Cassius and Detroit are members of the “precariat,” grateful to get temporary jobs for low pay. One of RegalView’s clients, a new corporation called Worry Free, may have solved their problem: It offers “lifetime labor contracts” (no more layoffs, no more downsizing, no more part-time contracts and internships and temping!) with food and housing built right in. Worry Free workers live in sterile dorms, where they smile for reality-show cameras; ads for the company proclaim, “IF YOU LIVED HERE, YOU’D BE AT WORK ALREADY!” This may sound like slavery, but hey, are we sure it’s worse than long-term unemployment? In “Sorry to Bother You,” the system’s greatest threat—literal ownership of your time and person—is also its promise of relief.

In a way, the film’s villain isn’t RegalView or Worry Free or capitalism itself, but something much older: aspiration, or the belief that meaning and human worth come only from accomplishment and material success. The mentor who explains the “white voice” to Cassius explains that it isn’t really what white people sound like. It’s what they wish they sounded like. It is the voice of a man who doesn’t need to make this sale. Even the local dive bar has a V.I.P. Room (“What the hell is a place like this doing with a V.I.P. Room?”) and its password is “Upscale Elegance.” Detroit might be a radical artist, but everybody’s got aspirations. As she cuddles her newly successful fiancé in bed, she is watching their apartment change around her: kissing him, but watching the TV grow.

Capitalism is a Möbiusstrip whose only side is a ticker-tape message: YOU LOSE.

When the corporate overlords want to seduce Cassius, they do promise him money——but they also promise him a chance to do something big, to be a “legend,” to make history, to “finally [be] good at something.” And for that feeling of being more than just another face on the crosstown bus, Cassius might just sell his soul.

The film’s big set-piece—a performance-art show by Detroit—is ambivalent and multivocal, which makes sense for a movie about complicity and cooptation. In most comedies this scene would be merely scathing: Detroit strips down and recites lines from the martial-arts film “The Last Dragon” while audience members pelt her with items meant to symbolize the exploitation of the Congo. In a merely “woke” film, she would be a truth-teller, and Cassius’s chivalrous attempt to protect her from using her own humiliation as political art would be treated as misguided mansplaining. But in “Sorry,” the satire turns poignant and sympathetic: Cassius is right, and there is something wrong with this scene of weaponized self-abasement, and yet he will learn from her strategy by the movie’s end.

“Sorry” is not the kind of movie that offers a positive political program. Its satire loses some specificity and bite when it comes to labor unions, though there are hints that at least some of the protesters are in it for fame. There is a clunky cynical comment by a union organizer that calling your representatives doesn’t do anything. But the movie’s smartest political commentary comes in its consistent portrayal of what might be called mutation. Again and again we see resistance transformed into supplication. Even Cassius’s first RegalView supervisor has an anarchy tattoo. Capitalism is a Möbiusstrip whose only side is a ticker-tape message: YOU LOSE. If there is any hope, it lies in the loss of our former aspirations. Cassius’s final degradation, the movie suggests, offers his chance at rebirth.

Good point abut "advancement" and, indirectly, about security. Security ot advancement are the big motivators for working (except, in rare cases, for the love of craft, for the need to achieve or even to do good). This article made me think of the centrist Democratic party: the solution to everything is to go to college.

Very interesting review. I saw this movie twice, and speaking with brown and black persons we had a very different interpretation. It’s interesting what is missed in this review and what is not, and vice versa as well.

Sorry to Bother You is an excellent movie. I have recently watched it on my Android device using Redbox TV app. Download RedBox TV from official website and enjoy all HD movies channels, News channels, Religious channels and Sports channels for free.