Out of the Convent: 'Ida' takes a journey through postwar Poland 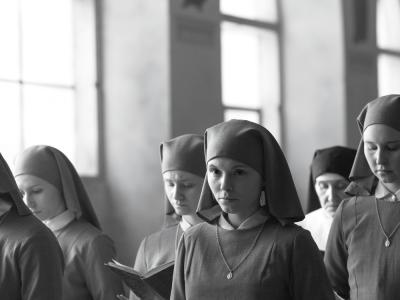 Nothing’s ever black and white, including black-and-white. Ida, the revelatory feature film by the Polish-born, Oxford-educated Pawel Pawlikowski, is shot in the kind of gloriously lamp black/lead white/smoke gray palette that suggests Ansel Adams, classic Hollywood publicity stills and the Weegee crime-photo catalogue of noir-era New York, as well as Pier Paolo Pasolini’s “The Gospel According to Matthew,” and the “The Sweet Smell of Success”—movies, respectively, about divinity and corruption. “Ida” possesses more than a bit of both.

Pawlikowski, best known for “The Last Resort” and “My Summer of Love,” goes back to Poland for “Ida,” and it helps in watching his film to know something about his homeland—the pro-diversity politics of the early 20th-century patriot Jozef Pilsudski, for instance, who gets a brief but significant mention early in the film and the country’s legacy of anti-Semitism, which was of a stripe that rendered Hitler almost superfluous. Come to think of it, “Ida” is a Holocaust movie, but of the kind that really matters: one less concerned with recounting murder than in absorbing its echoes.

The year is 1962 and Anna (newcomer Agata Trzebuchowska) is preparing to take her vows at the convent-orphanage where she’s grown up in the countryside. She and her fellow novices are attending to devotions and decorating when she is called to a meeting with the mother superior (whose office suggests a German neo-expressionist dream, a shadowed vault with steps that lead in and down). Anna is told that she has an aunt. Why, Anna asks, did she never come for me? We wrote to her, the elder woman says. Maybe she never got the letters? She got the letters. And before you take your vows you should see this woman, this relative you never knew you had, who never fetched you from the convent.

The experience of “Ida,” which is rich in novelistic detail and subtle characterizations and dreamy scenes of snow falling on its angelic title character, has much to do with the way Pawlikowski allows each revelation to play out, free of melodramatic contrivance, with enormous restraint, but in ways that nevertheless leave one breathless. The principal “reveal” comes at the beginning, and we would be unable to continue to talk about “Ida” without telling the big secret, so if you think you don’t want to know, stop reading—although any reader even vaguely aware of this movie has seen the cat let out of the bag long before this. (Keeping oneself willfully uninformed about a movie’s key plot point is like trying to avoid the score of a time-delayed Olympic hockey game.)

Anna is Jewish. And her birth name was Ida. The young woman receives this information, delivered by her aunt with a sadistic lack of ceremony, with a look that is profoundly indefinable—it isn’t shock, it isn’t alarm, it isn’t fear or loathing; it may just be the stunned stare of someone who, behind the enormous eyes of the gifted Ms. Trzebuchowska, is reassessing her entire life, self-definition, place in the history of her country, her church and the Godly universe.

It is also the second shock Anna has gotten in as many minutes: Her aunt, Wanda Gruz (Agata Kulesza), is a tough-as-nails...well, “broad” would be the word in the parlance of film noir, which “Ida” occasionally resembles; but she is educated, savvy and, beneath the leathery exterior, sympathetic. But she is a woman with a past and a steamship’s worth of baggage. There is a man in her aunt’s apartment when Anna arrives; we wonder what the young girl knows, or thinks, about that. As becomes immediately clear, Wanda is a woman not so much devoid of sentiment but one who has freed herself from it. She exhibits a deliberate disregard of Anna as a woman religious; she makes mocking fun of her at times, not cruelly, but in a way Anna has never imagined possible.

“Ida” might have easily been titled “Wanda”—it is in many ways the older woman’s movie. She was once known as “Red Wanda”—a state prosecutor in a Soviet bloc country who sent many an “enemy of the people,” as she sarcastically puts it, to their deaths, including, undoubtedly, priests. She is now a judge, hearing cases against anti-socialist protestors who cut down red tulips. She is a woman fallen, but how far and how hard we can only begin to suspect.

“Ida” is a movie that requires one to pay attention. That may sound pedantic, but much of what passes for motion picture entertainment is intended to waft across our benumbed intellects like a warm wet breeze. “Ida” stings, but in wonderfully alarming ways. Pawlikowski’s script involves Polish culpability in the Holocaust, the unrepentant seizure of Jewish property, survivor guilt, the cost of political zealotry and the question of whether God is a refuge or a scourge. The writing makes the glorious look of the movie seem ironic and its moral lessons caustic.

It is also a road movie, after a fashion: Anna/Ida wants to know about her parents, where they are buried, where they lived. Wanda, knowing full well where this will lead, starts drinking even before she puts the car in drive. Going off the road at one point, she is arrested, despite her matter-of-fact statement that she has immunity as a judge. She gets her car and an apology from the fat cop in the morning. Ida, meanwhile, is getting an education.

They pick up a hitchhiker (Dawid Ogrodnik), a jazz saxophonist with a thing for John Coltrane (“Naima” gets a couple of nice renditions) and who “sparks,” as they might have said in 1962, with Ida. “You should try,” Wanda tells her. “Otherwise what good are these vows of yours?” The aunt is a provocateur, of course, but she is also wise in her way. She knows her niece is a naïf, unused to applying any critical analysis to any life, especially her own. “Jesus didn’t hide in a cave with his books,” Wanda tells her cloistered ward. “He went out in the world.”

“This Jesus of yours adored people like me,” she adds in one of her more inebriated moments. “Take Mary Magdalene....”

As we are in post-war era Poland, amid people philosophically, spiritually and emotionally opposed to each other, one can guess a bit of where “Ida” is going, and where it arrives. But one can’t guess everything, anymore than Anna could, on the snowy morning at the convent when she set out to become Ida.

John Anderson is a film critic for Indiewire and The Wall Street Journal and a regular contributor to the Arts & Leisure section of The New York Times.