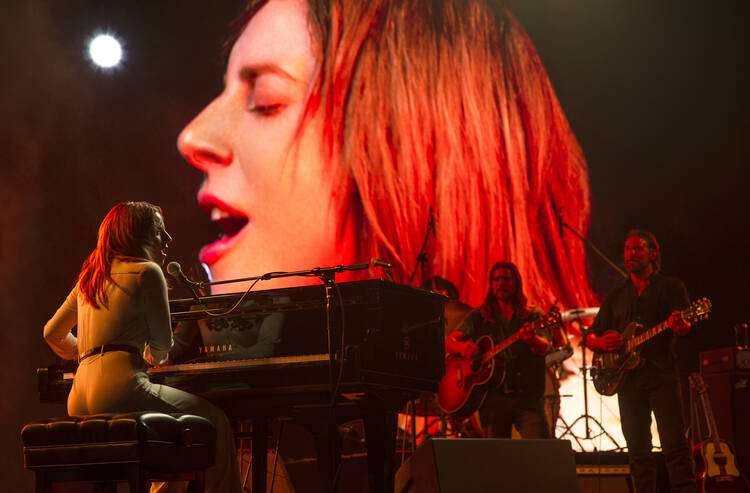 Lady Gaga and Bradley Cooper in "A Star Is Born" Image via 2018 Warner Bros. Entertainment Inc. and Metro-Goldwyn-Mayer Pictures Inc.

As many well know, Stefani Joanne Angelina Germanotta, the product of Catholic parents, the Upper West Side and the Convent of the Sacred Heart, grew up to be Lady Gaga, pop chameleon personified and mistress of appropriation/recreation. When she sang her “Sound of Music” medley at the 2015 Oscars, for example, she made one forget all about Julie Andrews (sacrilege!), while at the same time making people realize, perhaps for the first time, what a great songwriter Richard Rodgers was.

Something similar happens with Bradley Cooper’s close-to-incandescent “A Star Is Born.” The fourth remake (not counting 1932’s “What Price Hollywood?” which was built on the same skeletal story by Adela Rogers St. Johns) stars Gaga as the ingenue-on-the-ascent, a role previously played by Janet Gaynor (1937), Judy Garland (1954) and Barbra Streisand (1976). Cooper is Jackson Maine, the established star careening into oblivion (played by, respectively, Frederic March, James Mason and Kris Kristofferson). There is a lot of pedigree behind this project, obviously, and Gaga may not erase all predecessors from living memory. But she does inhabit the character—named Ally, rather than Vicki Lester—with a disarming combination of innocence and assurance. She is endearingly natural, innocent, petulant, wary. She is real. So is Cooper, who carries rock star Jackson Maine’s tortured soul around like an old overweight Fender amplifier, and whose hearing is disappearing faster than he can drink.

But “A Star Is Born” is not only among the most self-reflective of Hollywood vehicles but the most resilient.

Like the ’76 version, the principal characters are linked by music—and the music is first-rate. When the binge-drinking Jackson stops his limo at a drag bar following a sold-out arena show, he makes a discovery—Ally, singing the Edith Piaf standard “La Vie En Rose.” Her voice is a revelation for everyone. When he cajoles her into attending one of his concerts—and then drags her on stage to sing one of her songs (“Shallow,” which readers will be hearing a lot in the months to come)—it is positively electric, the kind of moment moviegoers live for; though perhaps only the biggest theaters with the biggest sound will be doing it true justice.

It may be that every generation gets the “A Star Is Born” it deserves, though what we did to deserve this one is anyone’s guess. It has to be taken as a fairy tale, given its pronounced implausibilities: How did Jackson learn that song so fast? How does Ally become a star so fast? Why is her father, Lorenzo (Andrew Dice Clay), so fixated on singers like Frank Sinatra? What is he, 80 years old? There are also a few scenes—one with Clay, another with Sam Elliott, who plays Jackson’s brother—that give new meaning to mawkish.

But “A Star Is Born” is not only among the most self-reflective of Hollywood vehicles but the most resilient; when clichés work they are called conventions. One does wonder, though, watching Jackson take his pitched descent as Ally’s face goes up on a billboard over Sunset Boulevard, whether it is a redemption story. It is hard to believe there could be any plot points left to spoil after 80 years, but here comes one: As the two careers take their respective trajectories, it becomes clear to the Jackson Maine character (called Norman Maine in the ’37 and ’54 version) that he has become his wife’s cross to bear. And after the inevitable public embarrassment that marks every version of the tale (the one here is particularly painful), he realizes he has to destroy himself to save her career.

“A Star Is Born,” in its way, is taking a swing at all anthemic, self-affirmational pop music post-“American Idol.”

His sacrifice is noble. It is an act of love. But is it right? No, of course not. But isn’t that what has made the story so irresistible? The philosophical/theological chewiness of the whole thing?

The movie does not address what, given our current state of public affairs, it would actually take to die of embarrassment anymore, but Cooper and his co-writers, Eric Roth and Will Fetters, do cast a few aspects of the story quite differently than past versions. The envy angle, for one. When Ally is on tour with Jackson and she is approached by the big-time manager Rez (Rafi Gavron) and told she is doing something different and important and that people need to hear what she has to say, we all know the score: Rez is essentially Satan and what he wants is to turn Ally into one more musical commodity (a blonde one, to begin with). Ally does indeed turn into something dangerously close to Lady Gaga herself, with backup dancers and a repertoire of largely soulless pop. Jackson, who loves her, drunkenly tells her she is an embarrassment—he is not jealous, like previous Norman Maines; he is musically offended. Ally became a sensation because of her hooks and her heart and those are what she is losing on her way to the top. “A Star Is Born,” in its way, is taking a swing at all anthemic, self-affirmational pop music post-“American Idol.”

Visually, the movie sparkles: Matthew Libatique, closely associated with Darren Aronofsky, creates beauty where it really should not exist, with an intimacy unlike anything fans of the previous films will expect. Even the concert scenes are up close and intensely personal, and mostly involve Jackson and Ally, around whom the rest of the universe revolves. And rightly so.

It is always interesting to note that only a few really big artists, (not all of them, certainly) are able to prod and push the culture in ways that religion no longer can.

Thank you, John, for this great review! I'm a huge Barbra Streisand fan and I love how she has embraced Lady Gaga taking on her previous role. In fact at first, I wasn't even going to go see it because I just couldn't imagine any one else in the role. Now it's part of my weekend plans for sure!

Lady Gaga is a disgusting occultist,

What on earth does that mean?