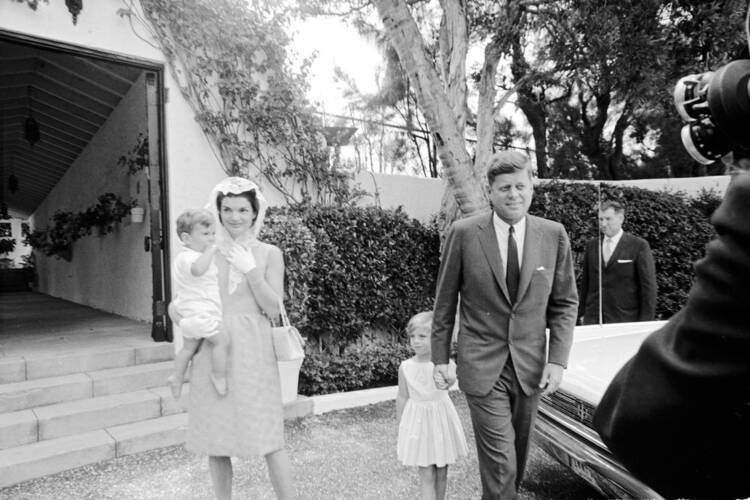 “A journal of opinion,” former America editor in chief Joseph A. O’Hare, S.J., was fond of saying, “ought to have an opinion.” It was his way of encouraging America’s editors to have a unique editorial position in each print issue, even if the events or actors of the day did not always seem to merit a deep dive or lengthy analysis. The situation gets a little dicey when it comes to endorsing political candidates or parties—America is a religious non-profit, after all—but the editors do try to offer wisdom and insight on political issues of the day while steering clear of demonizing or lionizing specific politicians.

Well, most of the time. The 1950s brought us a politician the America editors simply could not resist, and he has remained an obvious favorite through the years: John F. Kennedy. We have a joke around the office about the sheer number of stories in America over the years that start with “What St. Ignatius can teach us about X,” but a close second might be “What would J.F.K. do?”

The 1950s brought us a politician the America editors simply could not resist, and he has remained an obvious favorite through the years: John F. Kennedy.

Kennedy himself wrote for America as a United States senator in 1957, revising a speech he gave on the Senate floor on the political crisis in Algeria for publication in the magazine. The way France and the United Nations handled the future of the French colony (it would gain independence in 1962), he warned, would have long-term consequences for the rest of Africa as Europe’s old colonial empires fell apart. The speech, noted America editor Matt Malone, S.J., in a 2017 retrospective, “landed Kennedy on the front page of The New York Times and in hot water with the pro-French foreign policy establishment.”

Sen. Kennedy’s conclusion would ironically prove painfully apt—not necessarily for the French, but for the United States: “Neither France nor the Atlantic Alliance can afford another Indo-China.”

Kennedy’s presidential victory three years later, though, truly elevated him in the pages of America. The editors compared his 1961 inaugural address to “deathless documents of the past” like Abraham Lincoln’s second inaugural. “It was rich in literary, biblical and historical overtones,” the editors wrote, and “studded with quotable gems,” including the famous line: “And so, my fellow Americans: ask not what your country can do for you—ask what you can do for your country.” Indeed, the editors wrote, the speech “echoed the ringing words Shakespeare put into the mouth of King Henry V on the eve of Agincourt” in his famous “St. Crispin’s Day” speech.

Kennedy’s election to the presidency, wrote the noted historian Charles R. Morris in America in 2009, “was the first great Catholic event of the decade, and there was a distinct emotional arc to America’s coverage of his White House run.” First, there was a dispassionate examination of the obligations of a Catholic officeholder; then open bitterness as Protestant anti-Kennedy mobilization portended another prejudice-laced Al Smith campaign; next near-giddy incredulity at the Kennedy poll surge after the first televised debate; and finally unabashed joy at the final ratification of ‘full first-class citizenship’ for American Catholics.”

“We pray that he may rest in peace—his noble soul with God for all eternity, his still youthful body awaiting the resurrection of the dead.”

The new president, the editors wrote, “a man who for all his youth has endured pain and lived with death,” was “wedding American idealism and American power” and had “summoned free men to a grand crusade.” When he was killed in 1963, the editors echoed a nation’s sorrow: “Word of the infamy of November 22 thundered upon us with the heart-stopping suddenness of a midair collision or of a step over the brink into darkness,” they wrote. “We pray that he may rest in peace—his noble soul with God for all eternity, his still youthful body awaiting the resurrection of the dead.”

His death, wrote Joe McAuley in 2014, left “a numbing ache that never went away and never-ending conspiracy theories that warped the national psyche, instead of the dreams, the goals and the promise he wanted the American nation to have and achieve.”

Would our editors and contributors be so fond of a young JFK today? Would the nation? Would American Catholics? CBS reporter Bob Schieffer, who covered Kennedy’s assassination, said his death and the surrounding events were the “weekend that America lost its innocence.” Looking back through America’s pages, that observation rings somewhat true: For better or for worse, the starry-eyed optimism of 1961 is largely missing these days regarding any politician or political movement.

It’s been a minute since Psalm 146 warned us “Put not your trust in princes, nor in the children of men,” and that advice holds today. Still, it’s fun to think on Camelot.

Would our editors and contributors be so fond of a young JFK today? Would the nation? Would American Catholics?

Our poetry selection for this week is “Sunday Morning Bed,” by Jasmine Marshall Armstrong. Readers can view all of America’s published poems here.