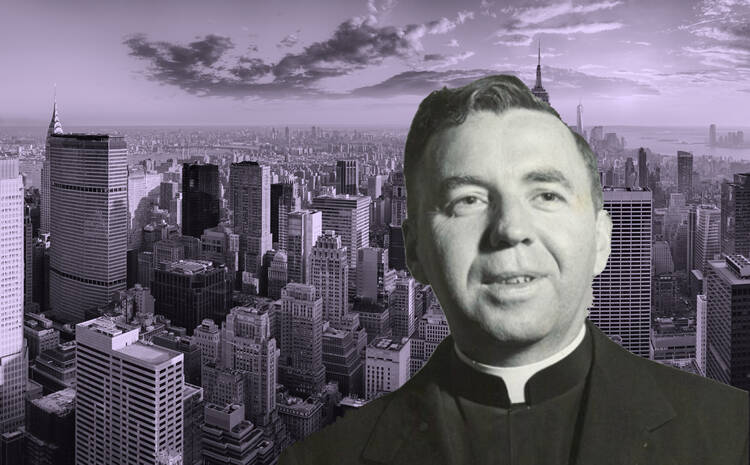 Last week’s Catholic Book Club column focused on an American Jesuit who became widely recognized as a public intellectual in the middle of the 20th century: John Courtney Murray, S.J. But what if I told you that there was another American Jesuit, a friend of Murray, whose writings on everything from theater to fiction to politics to civil society to mental health were equally as important at the time? No, not Walter Ong. No, not Avery Dulles. No, not Bernard Lonergan (he was a Canadian anyway). The scholar in question was a man of great intellect and insight who still today lacks the reputation he deserves: William F. Lynch, S.J.

I will admit I am biased; in the summer of 2011, I had the opportunity to do a directed study of Lynch under John F. Kane, a Regis University professor and an expert on Lynch, who published a hefty intellectual biography of him, Building the Human City, in 2016. I had the chance to read much of Lynch’s work and discuss it with Kane, including Lynch’s classic books The Image Industries, Christ and Apollo, Images of Hope and Images of Faith. I suspect the biggest obstacle to Lynch’s rising to the prominence that his work deserved is that he had too many interests, all of which he approached with somewhat digressive movements that avoided the declarative in favor of the descriptive.

One of William Lynch's biggest fans was Flannery O’Connor. Every human beauty, for Lynch as well as for O’Connor, points toward and is referent to a divine, transcendental beauty.

Though trained as a philosopher, Lynch emphasized concrete and contextualized experiences throughout his writings. The attempt to escape from time, from embodied realities, from personal and societal movement and development, Lynch wrote, was an aesthetic and spiritual disaster, both for Western culture and for individuals. Think of the incarnation of Christ, Lynch writes in Images of Faith; what the Christian believes to be the most important moment in all creation occupies one tiny moment in 14 billion years of space-time. If Christ can be born in a situation of such sheer irony (an important concept for Lynch), should that not be a reminder that we cannot and should not try to escape our historical milieus or the context in which we exist?

Lynch also advanced the notion of the analogical imagination—a way of looking at the world as being suffused with and analogous to an infinite divine reality—years before similar concepts were championed by David Tracy and Andrew Greeley. One of his biggest fans was Flannery O’Connor for almost precisely this reason: Every human beauty, for Lynch as well as for O’Connor, points toward and is referent to a divine, transcendental beauty. In a 2015 article for America, Mark Bosco, S.J., noted that “Father Lynch’s work validated O’Connor’s particular modernist, even postmodernist proclivities and her own artistic claim to a Christic imagination.” For both, “finite and infinite realities coalesce; so for Father Lynch, as for O’Connor, there is no need to pull together what has never been separated.”

Kane’s book, the first comprehensive biography of Lynch, also addresses Lynch’s lifelong examination of contemporary society through the use of various images in his writings and talks. In a 2016 review for America of Building the Human City, Brett McLaughlin, S.J., quoted Kane’s recognition that instead of seeking a “a systematic or fundamental perspective on Catholic life in the United States,” Lynch instead was “in all he wrote concerned to understand, and to help us understand, a number of basic ideas which he saw as crucial or foundational for ability to respond to the challenges of our times.”

McLaughlin also noted the strong influence of the spirituality of St. Ignatius in Lynch’s emphasis on God’s thorough engagement with the world: “He pointed out that faith must have a body; spirituality involves concrete action in time.” The book includes sections on the role of the arts in society, images of hope and faith (and how they function with personal and societal woes), a spirituality for public life, the dynamic between the secular and sacred and new developments in theology.

Lynch advanced the notion of the analogical imagination years before similar concepts were championed by David Tracy and Andrew Greeley.

Lynch also contributed a number of articles to America over the years, including a 1943 essay on a topic America has addressed four billion times since: “the vexing problem of the Catholic writer.” Is there such a thing? Was there once? Does the Catholic writer have something unique to bring to the world? Unlike some of his successors in this endeavor, Lynch did not argue that there was no such thing, or that all writers sought the same truth, but instead criticized “those who would warn us not to begin to use a Catholic language, who will keep insisting that the vision of the writer is shared alike by all men—regardless of race, color or creed.” Why? Because wrestling with Catholic dogmas and moral teachings was part of what gave Catholic writers their distinct place in the world of letters:

Now no one has so little sense as to suggest that we must be obnoxious inserters of the Catholic word—doing all this with a certain vacuous deliberation. Nevertheless, there is something to be said for a deliberate supernatural art. For we have dreadfully exaggerated the necessity of our men of letters writing with a Catholic subconsciousness only (the profession of writing becomes more mys­terious every day). But, in reality, it is sharply con­ceived dogma and the dialectic of the same that makes all the difference in the world.

A comment later in that same essay gives another hint as to why Flannery O’Connor found Lynch such an intriguing thinker. “What a pity if we are led to believe that there can be no writers today until we have educated the people to the point where they will accept the insertion of some sort of realism between the puritanic and the prurient,” Lynch wrote. “Oh yes, it is a problem, but let us be grave enough to recognize that it is only a very small part of the problem.”

I remember thinking 10 years ago the same thought that occurs to me in looking back at William Lynch now: He would have made an incredible novelist.

Our poetry selection for this week is “Lord of Hope and Misery,” by Diane Glancy. Readers can view all of America’s published poems here.