Theophilus Lewis: A Black Catholic convert who brought the Harlem Renaissance to the pages of ‘America’ 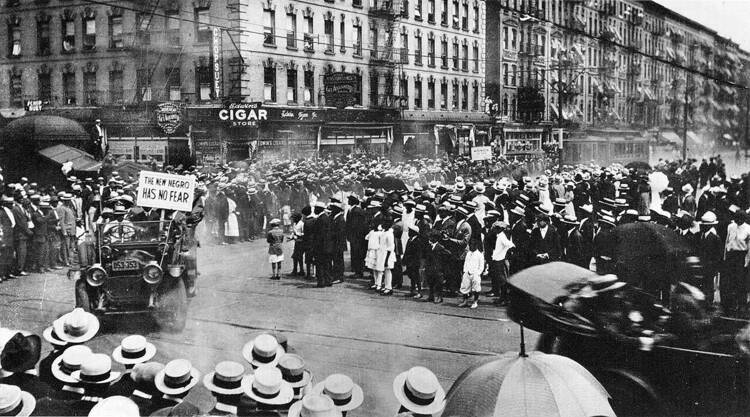 A UNIA parade in Harlem in 1920. (Wikimedia Commons)

Among the cultural touchstones of the Harlem Renaissance in the 1920s was a magazine with a small circulation but an outsized influence on African American culture at the time: The Messenger. Founded in 1917 by A. Philip Randolph and Chandler Owen and staunchly socialist in its political views, the magazine initially declared that “economics and politics take precedence to music and art,” but eventually took on a more literary tone. It also eventually expanded its list of authors to include Black writers from around the United States.

Drama, particularly African American drama, was an early focus of the magazine, in large part because of the efforts of a theater critic and journalist with an unforgettable name: Theophilus Lewis. A veteran of World War I and a longtime employee of the U.S. Postal Service, Lewis moved to New York in 1922 and began writing book reviews and theater criticism for The Messenger. He held a dim view of much of the dramatic offerings of the time, in part because he deplored the musicals and low-brow comedies that dominated theaters.

Among the cultural touchstones of the Harlem Renaissance was a magazine with a small circulation but an outsized influence on African American culture at the time: The Messenger.

An aficionado of small theaters that treated important social and political issues, Lewis was also critical of the way mainstream directors tended to push African American actors away from sophisticated or challenging roles. Only the development of a national Black theater that employed Black playwrights and actors, he argued, would prevent Black actors from being relegated to vulgar comedies or simplistic musical roles.

The Messenger struggled financially throughout its tenure, and writers like Lewis were often unpaid. The magazine also faced harassment from the federal government (including the arrest of its editors on charges they had violated the Espionage Act) because of its criticism of American involvement in World War I. “No intelligent Negro is willing to lay down his life for the United States as it now exists,” the editors wrote in July 1918. “Intelligent Negroes have now reached the point where their support of the country is conditional.”

The magazine folded in 1928. Lewis went on to write book and theater reviews for other African American newspapers, including The Pittsburgh Courier. In 1939, he became a Catholic, and over the next several decades contributed regular theater reviews to America. While many of his reviews were straightforward theater criticism, he also continued to write on the themes he had pursued at The Messenger.

A classic example is a 1946 essay on Lena Horne, who had recently bemoaned the fact that African Americans like herself were often encouraged to be singers and musicians rather than actors. “When Miss Horne was being interviewed she was probably thinking of numerous talented Negro actors who are unknown because the color bar denied them an opportunity to appear on the American stage,” Lewis wrote. “Her remarks are relevant to the current doldrums in the theatre, because full recognition of the Negro actor may be precisely what is needed to reinvigorate our stagnant drama.”

Lewis’s output from 1937 through 1961 was prodigious by any measure; he published more than 500 theater reviews for America.

A 1961 review of Robert Bolt’s “A Man for All Seasons” began with a classic Lewis opening line: “While the Broadway theatre generally is mediocre at best, and too often meretricious or nauseous, it occasionally rises to maturity.” He had high praise for the play, which starred Paul Scofield as Sir Thomas More and would be made into a movie a few years later: “By a marvel of dramatic writing, the play is as exciting as if Sir Thomas engaged the king in a duel or fist fight. As a stage production, the drama is magnificent.”

Lewis was less enthusiastic in the pages of America about another debut, Arthur Miller’s “Death of a Salesman” in 1949: “Since it is practically certain that Death of a Salesman will be elected best of the season, its accolade warrants a re-appraisal of its dramatic and social importance. In either department, the play is no better than second class,” he wrote. “While some of the author’s admirers call the drama a criticism of our national values, it is never quite clear which popular fallacies are the targets of his censure,” Lewis continued.

“Are his strictures intended to debunk the myths and vainglory that have elevated salesmanship to the status of a perverted religion, like voodooism or the nudist sect, or is the salesman a symbol of the inadequacy of material success? If the former were his intention, he has done a good job; if the latter, his treatment of the subject is superficial, faltering and rather dated.”

Lewis’s output from 1937 through 1961 was prodigious by any measure; he published more than 500 theater reviews for America and more than 100 contributions in other areas, including book reviews, cultural criticism (including promoting small African American newspapers) and spiritual reflections for the magazine.

During those years, America adopted a far more aggressive and progressive tone regarding racial justice and social issues, a transformation usually credited to the efforts of John LaFarge, S.J., editor in chief of America from 1944 to 1948 and a longtime associate editor before and after. But what if just as much credit is due to Theophilus Lewis’s incisive cultural commentary and consistent promotion of African American cultural enterprises in these pages?