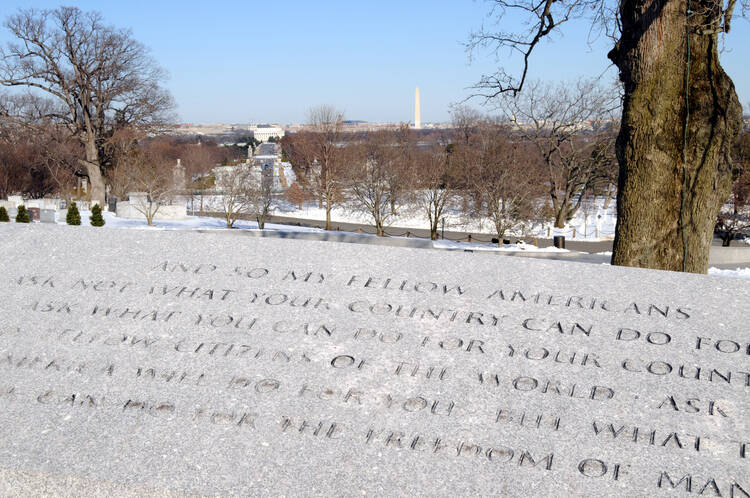 America’s editors managed, to a degree, to contain their enthusiasm for John F. Kennedy’s candidacy during the presidential campaign of 1960. Their reaction to his inaugural address, however, was less restrained.

In editorializing on President Kennedy's Inaugural Address, one is tempted to string together a dozen sparkling quotations and let it go at that. For the materials from which this relatively brief address was fashioned are the heady stuff that history is made of. As Lincoln assuaged the spiritual anguish of a war-sundered nation in his Second Inaugural, as in his First Inaugural Franklin Roosevelt stirred to new hope and enterprise a generation mired in the despondency of economic depression, so did John F. Kennedy rally an apprehensive people to face with confident energy the seemingly insoluble problems of our times.

To some readers this comparison with deathless documents of the past may seem farfetched. After all, nothing the President said on January 20, as a bitter cold wind swept over snow-covered Capitol Hill, has not been said before. The contemporary challenge to freedom is plain for everybody to see. The rise of Castro in Cuba has dramatized the Communist threat to the Western Hemisphere. The anarchy in the Congo, which the Soviet Union and its stooges are recklessly exploiting, has raised the specter of newly independent nations trading 19th-century colonialism for 20th-century slavery. The civil war in Laos provides only the most recent reminder that our unity with “those old allies whose cultural and spiritual origins we share” is less firm than it ought to be. And as background for all this, we have been living for more than a decade now with the awful and frustrating knowledge that while “man holds in his mortal hands the power to abolish all forms of human poverty,” he also holds in the same fragile vessels the ability to destroy all human life.

What was there, then, about this Inaugural which in the opinion of some raised it far above pedestrian levels and destined it, perhaps, to a high place in history?

It was written in excellent modern style—lean, terse, evocative. It was rich in literary, biblical and historical overtones. To old friends and ambitious foes, to our neighbors in the hemisphere and the masses of people in underdeveloped lands everywhere, it said with precision, and with feeling deep but disciplined, exactly what should have been said. And the address was studded with quotable gems: “Let us never negotiate out of fear. But let us never fear to negotiate”; “For only when our arms are sufficient beyond doubt can we be certain beyond doubt that they will never be employed”; “If a free society cannot help the many who are poor, it cannot save the few who are rich”; “And so, my fellow Americans: ask not what your country can do for you—ask what you can do for your country.”

So it was that the word spoken by the President—a man who for all his youth has endured pain and lived with death—wedding American idealism and American power, summoned free men to a grand crusade.

But it was none of these merits that touched the Inaugural with greatness. What gave it distinction is suggested perhaps by a line from one of our American poets. “Each crisis,” wrote John Greenleaf Whittier, “brings its word and deed.” Early in the address, one sensed that President Kennedy was bringing the word that answered the need of our troubled age. Harking back to our revolutionary past, he sounded his keynote:

Let the word go forth from this time and place, to friend and foe alike, that the torch has been passed to a new generation of Americans—born in this century, tempered by war, disciplined by a cold and bitter peace, proud of our ancient heritage—and unwilling to witness or permit the slow undoing of those human rights to which this nation has always been committed, and to which we are committed today.

And what did that torch signify? It signaled that this generation is called, as other generations were called before it, to testify to its loyalty to the American dream:

Now the trumpet summons us again—not as a call to bear arms, though arms we need—not as a call to battle, though embattled we are—but a call to bear the burden of a long twilight struggle, year in and year out, “rejoicing in hope, patient in tribulation”—a struggle against the common enemies of man: tyranny, poverty, disease and war itself.

Is this challenge one to deplore, to be fearful of, to shrink from?

In the long history of the world, only a few generations have been granted the role of defending freedom in its hour of maximum danger. I do not shrink from this responsibility. I welcome it. I do not believe that any of us would exchange places with any other people or any other generation. The energy, the faith and the devotion which we bring to this endeavor will light our country and all who serve it—and the glow from that fire can truly light the world.

Surely, that was the word today's crisis called for—a word that scorned cynicism and routed despair, that soared above sterile caution and the diffidence that sires defeat, that found challenge exhilarating, a word that echoed the ringing words Shakespeare put into the mouth of King Henry V on the eve of Agincourt:

From this day to the ending of the world,
But we in it shall be rememberéd....
And gentlemen in England now a-bed
Shall think themselves accurs’d they were not here,
And hold their manhoods cheap whiles any speaks
That fought with us upon Saint Crispin’s Day.

Channeling JFK: To What Great Cause is This Generation Called?
Matt Emerson

So it was that the word spoken by the President—a man who for all his youth has endured pain and lived with death—wedding American idealism and American power, summoned free men to a grand crusade.

From the word born of the crisis to the deed it demands the gap is wide and treacherous. This, too, the President knows. Counting “a good conscience our only sure reward,” he concluded, “let us go forth to lead the land we love, asking His blessing and His help, but knowing that here on earth God's work must truly be our own.”

So it must be. Without God’s help the deed will not be done. With it, we cannot fail.