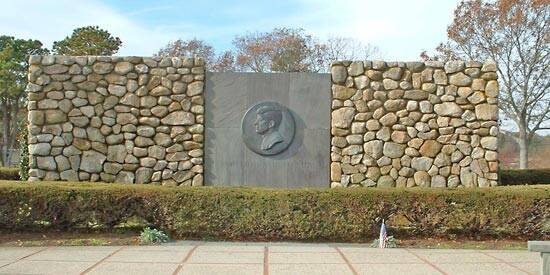 Cape Cod, Mass. -- Like everyone else old enough to remember, I am marking this week the 50th anniversary of the assassination of John F Kennedy. The other day I stopped by the J.F.K. Memorial in Hyannis (see picture), so near to where the Kennedys even now still have their summer home, and spent some time there, all alone, early on a Sunday morning after church. I thought back: I was in the Eighth Grade when it happened. The principal, Sister Gabriel, I believe it was, marched us over to the church to pray for the president and his family, and for the country. But this kind of reaction happened everywhere, I am sure, and if we are old enough, we still bear those memories. I have nothing special to add.

But what struck me most this afternoon, as I stood on the very chilly beach watching the sun settle into an ocean unobscured by any cloud whatsoever, is that now it is 50 years later. That is a very long time in a human life. Perhaps for some readers, the assassination was not the earliest public, outside-the-family event that permanently marked your life. But for me, now 63, I cannot think of anything before that day that has stayed with me in so palpable, poignant and disruptive a way. We know so much more now about Kennedy and his life and administration, and from the sensationalized and cynical perspective of 2013, it might be hard to imagine how dismayed and thrown over we were back then, as if there innocence had been lost. As if there was something called “innocence” on a national level. We now know that 1963 wasn’t Camelot in any simple sense (though the sadness of the Arthur story still rings true), but then it did seem as if something perfect and God-given had crashed to the ground. At least, so it seemed to me at age 13.

Fifty years later, of course, my life has been rocked by other public disruptions: the Vietnam war, the internecine turmoils of the post-Vatican II church symbolized by “Humanae Vitae” and the denial of equality to women, a dawning realization of the cruel inequalities of the global divide between haves and have-nots, all the way up to the attacks of Sept. 11, 2001, and still more recent disruptions large and small, like the Sandy Hook School slaughter of the children. Others may come to your mind. These are scars we all bear, reminders seared into our psyches telling us that we are frail vessels marked by what we do, hear, experience, year by year. At our best, as we age, we make our way across an uneven terrain marked by dark days like Nov. 22, 1963. But we don’t forget or stop feeling those events, no matter how long ago.

Nothing from November 1963 could foretell in any sure fashion how I would end up: there is no direct path from that day to my being a Jesuit, at Harvard, scholar of Hinduism, and so on. But the fact of that day, early in my life, did leave me disposed to imagine a world where the charm had broken, where no single story could be told beginning to end without a recognition that it might well go wrong, or had already gone wrong. Memories of that day still dig deep now, late in my life, telling me a lot not just about Dallas that afternoon, or our presidency then and now, or the increasing harshness of American life, but about myself most acutely: living in hope, yet in a darkened, disenchanted world.

Gerard Manley Hopkins, S.J., of course got this right too:

Spring and Fall: to a Young Child

Margaret, are you grieving
Over Goldengrove unleaving?
Leaves, like the things of man, you
With your fresh thoughts care for, can you?
Ah! as the heart grows older
It will come to such sights colder
By and by, nor spare a sigh
Though worlds of wanwood leafmeal lie;
And yet you will weep and know why.
Now no matter, child, the name:
Sorrow's springs are the same.
Nor mouth had, no nor mind, expressed
What héart héard of, ghóst guéssed:
It is the blight man was born for,
It is Margaret you mourn for.

Francis X. Clooney, S.J.
Show Comments (
3
)
Comments are automatically closed two weeks after an article's initial publication. See our comments policy for more.
PJ Johnston
9 years ago
If it is any consolation, there are some encouraging events marking a half-century as well. http://www.desmoinesregister.com/article/20131120/NEWS02/311200044/Tinkers-still-following-their-conscience-half-a-century-later?archive
John Norton
9 years ago
November 1963. The saddest days. I had never grieved that much, even for the deaths of my parents. I was 27, married, a grad student and TA at Penn. JFK provided a role model – charming, handsome, intelligent, brave, and Irish Catholic. I had grown up in Boston (Brighton) adjacent to Brookline where John Kennedy was born. Two maybe three miles from my home. He had been my congressman and senator. My older sisters had crushes on him. The only other Irish notables I knew of were the local politicians and priests – none of whom I wanted to emulate. I remember that weekend of fifty years ago staring into a small black-and-white TV. The replays of the parade in the open convertible, the shooting in Dealey Plaza, brain tissue splattered over Jackie’s pink Chanel suit, the dead president’s body arriving back in Washington. That Sunday morning I witnessed the identified assassin Lee Harvey Oswald shot in front of the cameras as he was being escorted by the Dallas police. The body lying in state surrounded by a honor guard as more than a million mourners filed by. The beat of muffled drums leading the funeral cortege to Arlington National Cemetery, a riderless black horse with the boots placed backwards in the stirrups, the military bearing of General De Gaulle – taller than most mourners – in his formal uniform, a young widow holding the hands of their two small children at the gravesite. All to the beat of muffled drums. Something else died that weekend. A hope that many shared of a future without violence and hate.
Trudy klug
9 years ago
We've been watching JFK for the last two weeks and it always makes me sad to see Jackie settling for two womanizers. Here she was, so beautiful. but in order to get what she wanted, Kennedy's habits were overlooked and everybody else did the same. It's no wonder the woman's movement became a reality, since nobody wanted unwelcome attention. "Your wife may have allowed it, but you, Mr. Rich/Powerful, are not allowed to touch me!" "But he is so cute?" That is all I ever heard when I arrived at St. Paul's High School in St. Petersburg, Florida after our family immigrated from the Netherlands. I was taught my worth was found in the men I was able to capture. Women received their power through HIM, which made life very dysfunctional. Weird that the Catholic Church never reminded Mr. President his actions were called offensive and sinful. Scripture talks about those who are a party to sin, being just as guilty as the one committing sin. So did that mean all church officials overlooking JFK's actions were sinning along with him? If our children got confused about rights and wrongs, it's because we had no clear cut guidance to teach them.