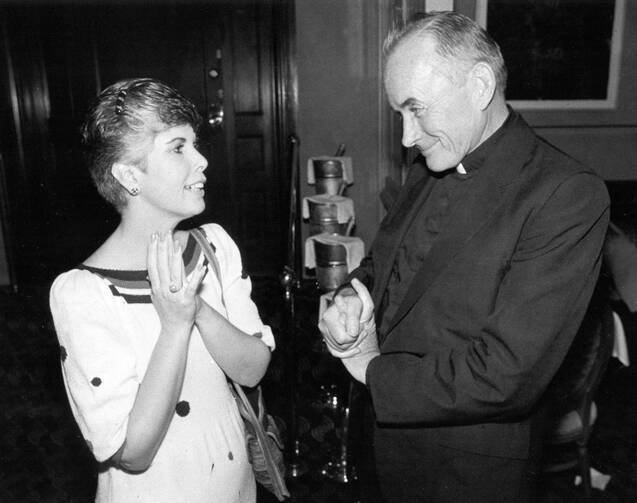 The Rev. Andrew Greeley had an enormous impact on the American Catholic Church—including through his many contributions to this magazine.

One of the great boons of working at a magazine with a history as long as that of America is that one becomes privy to much wild lore about past dramas—the victories and losses, enmities and alliances of a more colorful journalistic age. Such stories are almost always entertaining and usually largely untrue, but editors need no fact-checkers when they’re off the clock; the story is all that matters. One of the most vivid characters in America’s oral history is a priest who first wrote for America in 1957 and last wrote for the magazine in 2008, one with an outsized reputation in the worlds of sociology, church life and even in pulp fiction: the Rev. Andrew Greeley.

Friend to many an America editor, archnemesis at times to a few, Father Greeley was a prolific, pugnacious author and a natural storyteller, whether he was detailing the minutiae of a sociological report on the American Catholic Church in his important academic works or relating the juicy crepuscular activities of the denizens of a Catholic parish in one of his many novels. His long-simmering feud with Cardinal Cody of Chicago in the 1970s and 1980s is the stuff of legend, and he also was an outspoken critic of the U.S. bishops and the Vatican at times. His personal wealth—one novel about a corrupt prelate, Cardinal Sins (was it about Cardinal Cody? Greeley denied it), sold over 3,000,000 copies—allowed him to be a generous benefactor to Catholic charities and educational institutions as well.

Friend to many an America editor, archnemesis at times to a few, Father Greeley was a prolific, pugnacious author and a natural storyteller.

“Father Greeley could be irritatingly smart and a touch righteous, and some of his romantic novels bordered on the silly,” the prominent U.S. Catholic historian David O’Brien told Reuters at Greeley’s death in 2013, “but he dreamed a very special American Catholic democratic dream and we Catholics would have done well to have listened to him more closely.” Greeley’s notion of a “Catholic imagination”—one that saw our reality as analogous to a heavenly banquet—that distinguished U.S. Catholics from majority-Protestant culture also had a significant impact on studies of Catholic culture and literature. “As Catholics, we find our houses and our world haunted by a sense that the objects, events, and persons of daily life are revelations of grace,” he wrote in his book The Catholic Imagination.

Father Greeley’s first contribution to America arrived in 1957, when he was a 29-year-old curate at a Chicago parish (his pastor at the time reprimanded him for writing it, presumably because he had not asked permission). Seven years later, during the Second Vatican Council, America published an article of his that became a classic: “The New Breed,” describing the attitudes and psychological profiles of priests who seemed markedly different from their predecessors. Greeley described this new generation as idealistic and obsessed with authenticity, but also resistant to authority and coolly confident in the inevitability of the triumph of their ideas. They were, in retrospect, perhaps very much what one might expect of priests ordained in the 1960s. Here is Greeley:

The non-ideological coolness of the New Breed does not make them easy to deal with. Those who have positions of authority and responsibility over them surely deserve sympathy. The New Breed are frequently groping and inarticulate about precisely what they want, but they know that they want change. Often they seem almost to be hoping that their superiors will refuse their requests so that there may be a clear issue about which to fight, a definite change around which they can rally. They want freedom now—whatever that may mean.

Greeley’s blunt but honest appraisal met with agreement from many baffled bishops and superiors at the time; he similarly captured the concerns of a new generation of elders 40 years later, when The Atlantic published his 2004 article, “Young Fogeys.” In that piece, Greeley described a new generation of young priests far more comfortable with the trappings and assumed clerical authority of the priesthood than their immediate forebears. “Older priests today often complain that their younger colleagues are arrogant, pompous, and rigid, and that they love to parade around in clerical dress,” Greeley wrote. “The image that comes to mind is young versions of the old ethnic monsignors of the Depression era.” The story didn’t win him many friends among younger priests—but again, more than a few baffled bishops and superiors agreed with his blunt prognosis.

“As Catholics, we find our houses and our world haunted by a sense that the objects, events, and persons of daily life are revelations of grace."

Over the years, Greeley published articles on countless other subjects in America, from book reviews to eyewitness reports to long analyses of sex abuse and clerical celibacy, among others (including this deep dive into the Catholic imagination of Bruce Springsteen). His last contribution to America was in 2008: “The last Catholic novelist: The grace-filled fiction of Jon Hassler.” Two years previous, America had honored him with the Edmund Campion Award. Established in 1955 by Harold C. Gardiner, S.J., then literary editor of America, the Edmund Campion Award was given in the decades following to Anglo-American literature’s leading lights, including Jacques Maritain, Frank Sheed and Maisie Ward, T.S. Eliot, John Courtney Murray, S.J., Karl Rahner, S.J., Walker Percy, Shusako Endo, Annie Dillard, Chinua Achebe, John Updike, Muriel Spark and Rowan Williams, among many others.

Upon receiving the award, Greeley described himself not as a writer, but as “a parish priest who writes,” but longtime America literary editor Patricia Kossmann objected to that description. “Possessed of a keen intellect, quick Irish wit, penetrating insight into popular culture and an unfailing love for the church he serves, Father Greeley is numbered among America’s best friends,” she wrote in 2007. “With his books also available in more than a dozen foreign-language translations, it can be said that Father Greeley’s audience is indeed worldwide. That’s a pretty large ‘parish.’”

"With his books also available in more than a dozen foreign-language translations, it can be said that Father Greeley’s audience is indeed worldwide."

Our poetry selection for this week is “Discernment of Spirits,” by Mia Schilling Grogan. Readers can view all of America’s published poems here.