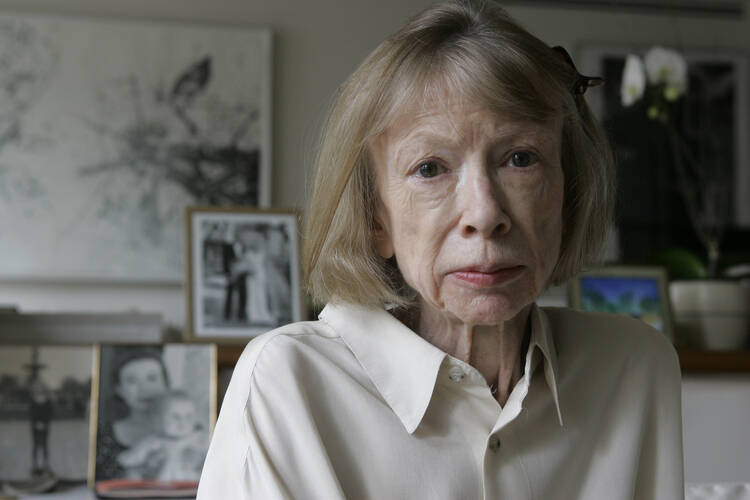 Author Joan Didion sits in front of a photo of herself holding her daughter, Quintana Roo, and another picture of her daughter's wedding, in her New York apartment Sept. 26, 2005. (AP Photo/Kathy Willens, File)

“Joan Didion uses language and controls structure so artfully that from the welter of futile speech and action she dramatizes so vividly comes a clear statement on the human condition,” wrote Elizabeth Woods Shaw in a 1977 America review of Didion’s novel A Book of Common Prayer. “The mirror she holds up to nature reflects crazily angled, grotesque images; but the reflections themselves are so sharp that watching them provides a rare aesthetic pleasure.”

Didion, Shaw noted, was capable both of conjuring up the horrors of modern life and of offering solace that there was still a point to it all. “It is terrifying to be made to realize how high the flood of meaninglessness has risen beneath the familiar surface of life,” she writes of Didion’s prose. “Yet, as long as an ordering intelligence can shape chaos into meaning in the very act of imitating it, we need not despair. The spirit is still moving over the waters.”

"There is something uneasy in the Los Angeles air this afternoon, some unnatural stillness, some tension."

When Joan Didion died on Dec. 23 in New York City at the age of 87, the many obituaries and encomia that followed noted her reliability as an observer—both in fiction and in reporting—but also her ability to bring her own idiosyncratic perspective to everything she wrote. It is perhaps no surprise, then, that such a representative of the “New Journalism,” with its focus on unconventional literary technique and individual perspectives, grew up in California, the subject of much of her early writing and historically a place where, well, idiosyncrasy finds toleration—and more often than not, celebration.

I grew up in Southern California and have always found the opening lines of Didion’s 1964 essay “Los Angeles Notebook” to be her finest writing—eerie and portentous but also rather matter-of-fact at the same time. She writes as a resident who is simultaneously an outsider. (Didion grew up in Sacramento, a quirky place too but an entirely different California from Los Angeles.) Here she is on the restless, hungry feeling caused by certain Southern California winds:

There is something uneasy in the Los Angeles air this afternoon, some unnatural stillness, some tension. What it means is that tonight a Santa Ana will begin to blow, a hot wind from the northeast whining down through the Cajon and San Gorgonio Passes, blowing up sand storms out along Route 66, drying the hills and the nerves to flash point. For a few days now we will see smoke back in the canyons, and hear sirens in the night. I have neither heard nor read that a Santa Ana is due, but I know it, and almost everyone I have seen today knows it too. We know it because we feel it. The baby frets. The maid sulks. I rekindle a waning argument with the telephone company, then cut my losses and lie down, given over to whatever it is in the air. To live with the Santa Ana is to accept, consciously or unconsciously, a deeply mechanistic view of human behavior.

A thing of beauty—and, in typical Didion fashion, it serves as an introduction to the story of a macabre and somewhat inexplicable Southern California murder. Did the supercharged ions in the wind bring felonious impulses with them? Or is our natural environment a convenient excuse for the disasters we all cause ourselves in life? That question can be found lurking underneath much of Didion’s writing.

Is our natural environment a convenient excuse for the disasters we all cause ourselves in life?

Her books—and those of her late husband, John Gregory Dunne, whose novel True Confessions is another masterpiece of writing about Los Angeles—were often reviewed in the pages of America, including her autobiographical accounts of dealing with the deaths of Dunne (A Year of Magical Thinking) and of their daughter, Quintana Roo (Blue Nights).

In his 2006 America review of A Year of Magical Thinking, Bill Gunlocke notes Didion’s courage and fortitude in making her own grief the object of her investigation; she was a new widow but nevertheless still the inquisitive reporter. “As she has always done, she burrows into the piles of details to learn about what happened. She works to learn the language of emergency rooms and autopsies. She asks the apartment building’s elevator operator what he remembers. She retraces that night and the death that occurred. She talks to herself and puts quotation marks around her words,” he writes. “She lets the readers in, so that they grasp her solitude and loss in ways they had never thought about such solitude and loss before, and in ways Didion hadn’t either.”

Her recollections of the life she and Dunne shared—“the California homes, the meals with literary friends and movie people, the dinners with just the two of them together, the swimming pools, the travels, the clothes”—are all “recollections that evoke a mood, an atmosphere,” Gunlocke writes. “She gives the reader what the reader appreciates most. That is what makes even Joan Didion’s sad tale somehow stimulating to read. Wherever she finds herself, be it in sunlight or loneliness, her experience is palpable to the reader, who is transported to where she is—and wants to be there with her.”

In a 2012 review for America of Blue Nights, Bill Williams notes that Didion’s constant rumination on what it means to age (and to die) gave her prose a heavy weight in her autobiographical works, including her reflections on the life and death of her adopted daughter, Quintana Roo. (In case you’re wondering, her name comes from the Mexican state.) Quintana Roo had a difficult adult life, as she was diagnosed variously with manic depression, obsessive-compulsive disorder and borderline personality disorder. She died of pancreatitis at 39 after what Didion called a “cascade of medical crises.”

“Didion ponders Quintana’s life and death in spare prose that is at once insightful, depressing and random. The book is as much a meditation on the author’s own fear of aging and illness as it is a lament about the loss of an only child,” Williams writes. “Although reviewers have praised Didion for her honesty and directness in Blue Nights, the pervasive tone of fear, anxiety and guilt soon leads to melancholy. The author, who recently turned 77, seems to live in constant fear of aging and decline in health. The pages brim with her maladies and frailties.”

In Blue Nights, Didion herself concedes she has spent much of her life in denial of aging. “Only yesterday,” she writes, “I could still do arithmetic, remember telephone numbers, rent a car at the airport and drive it out of the lot without freezing, stopping at the key moment, feet already on the pedals but immobilized by the question of which is the accelerator and which the brake.” But at 77, having lost her husband and daughter, she finds herself losing even the creative powers that made her so successful as a writer. And yet she chronicles this loss, too, confessing that her “cognitive confidence seems to have vanished altogether.”

Perhaps most remarkable about Didion is that these autobiographical works were hardly what she was known for best; rather, her essay collections, her reporting on places like El Salvador and Miami, her screenplays and her many forays into fiction were what earned her fame. She could make anything intriguing on the page, including herself.

Joan Didion could make anything intriguing on the page, including herself.