On the campaign trail in 1960 with John F. Kennedy 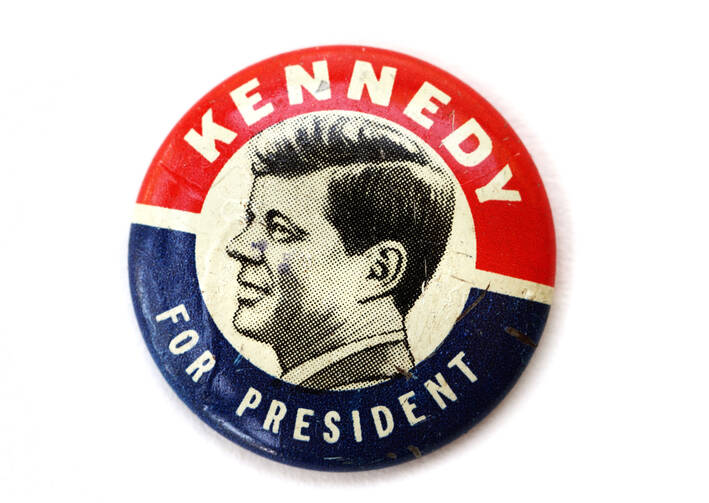 The Road to Camelot is an insider’s book, written for outsiders, on what it was like to be an insider during the totally unexpected five-year quest of John F. Kennedy to become the 35th president of the United States at the seemingly un-presidential age of 43. The authors’ view from the inside both enlightens our minds and darkens our spirits. Insiders know that the road to political success is full of swerves, deceptions and deceits.

The Road to Camelotby Thomas Oliphant and Curtis Wilkie

The authors—Oliphant, a Pulitzer Prize winner, and Wilkie, a professor of journalism at the University of Mississippi—were longtime prominent journalists covering politics at The Boston Globe. They cheerfully acknowledge that they are not historians, but they do cite all the readily available Kennedy histories and provide at the end of the book 361 footnotes for their insiders’ sources. The authors have made conscientious use of the John F. Kennedy Presidential Library in Boston, with its 1,600 oral histories and personal accounts. For Oliphant and Wilke, the writing of the political required the personal. From their days at The Boston Globe, they knew personally many of Kennedy’s political associates and insiders, including Ted Sorensen, brothers Ted and Bobby Kennedy, Eugene McCarthy, Tip O’Neill, Walter Mondale, Adlai Stevenson and others.

These details point to a key characteristic of the book: its abundance of the day-to-day political news between 1955 and November 1960, which is both off-putting and intrinsic to keeping the general reader’s interest. The benefit of their fast-paced, breathtaking delivery of detail is that the authors manage to make the outcome we already knew into something freshly exciting. Can a Catholic win the presidency? Can a comparatively unaccomplished senator who, at 43, would be the youngest-ever president, be able to stand up to the bulldoggish Nikita Khrushchev? With progressive democrats still hoping for a third Adlai Stevenson campaign, and conservatives rooting for Lyndon Johnson and traditional labor union moderates for Hubert Humphrey, how could this classic dark horse find a way to the White House? For those looking for a detailed account of the distrust, deviousness and deceits of political infighting in the context of the incipient importance of television, this book is for you. For those who still want to believe that a two-term J.F.K. presidency would surely have led to an American Camelot, this book is not for you.

Starting on the Road

Kennedy’s first congressional campaign was in 1946. Among his numerous obstacles, name recognition was not one. The picture-laden Life magazine had covered his wedding to the beautiful socialite Jacqueline Bouvier, and the newlyweds were interviewed by Edward R. Murrow on his popular TV show “Person to Person.” In 1952 he won a U.S. Senate seat. He then astonished his Senate colleagues with his out-of-nowhere bid for vice-president, hoping to appear on Adlai Stevenson’s ticket in 1956. Gracious in defeat, Kennedy released his 431 delegates to support the Stevenson ticket, which featured Carey Estes Kefauver as the vice presidential nominee.

For those who still want to believe that an un-assassinated JFK presidency would surely have led to an American Camelot, this book is not for you.

Oliphant and Wilkie’s thoroughness results in honest depictions. As a senator, Kennedy initially was not a strong voice on civil rights. His position on Sen. Joseph McCarthy’s ostracizing use of the “soft on communism” label was muted. He disagreed with a suggestion by Stevenson to end the military draft. Kennedy and his ever-growing think tank knew that the crowded way to Camelot had to be a back road with many bypasses—that is, one through the independent local precincts and not through the state national parties with their established patterns of patronage. Larry O’Brien, the electoral strategist, was given the task of overseeing the payment of the local toll price, thus securing the loyalties of sheriffs and county leaders, by funneling cash under the guise of “campaign expenses.” Without Joe Kennedy Sr.’s multi-millions from his Prohibition days, there would be no road to Camelot.

On the campaign road there were occasional respites, and for Kennedy they provided time for philandering, which the authors note in disillusioning detail. They cite Ted Sorensen (whom Kennedy called his intellectual lifeblood), who said that J.F.K. self-indulgently gave into carnal temptations when they became available, even while knowing that their inevitable ultimate disclosure could diminish the moral force and credibility of his presidency.

Did the Road Have a Direction?

The authors note that when he started his covert run for president in 1956, Kennedy was essentially a blank slate on the principal questions of the day. He was the spokesman for no issue and could claim no legislative achievement. But simple political calculation required filling in his blank Senate slate, which at this point suggested a contentless ambition. When pushed on why he should be president, J.F.K. once replied, “It’s not that I have some burning issue to take to the nation. It’s just, ‘Why not me’?”

When he started his covert run for president in 1956, JFK was essentially a blank slate on the principal questions of the day.

What he did have in abundance was good looks, quick intelligence, affability, charm and wit. When pressed to say whom he was rooting for during an Iowa City campaign stop at the Notre Dame versus University of Iowa football game, he said he would “cheer for Iowa and pray for N.D.” In the first political campaign to use TV commercials, the telegenic J.F.K. quickly absorbed the pertinents: that message and appearance are linked; that short declarative sentences trump knowledgeable verbosity; that makeup improves appearance; that under harsh stage lights, blue shirts are better than white.

His pursuit of gravitas was much abetted in 1957 when some backroom dealing landed him a front-row seat on the Foreign Relations Committee. His July 2, 1957, speech on the Senate floor brought him the floodlights of notoriety that ambition required. He took on the Republican and Democratic establishments on the issue of colonialism. He criticized the Eisenhower administration’s complicity with France and Great Britain and insisted that the United States should not see ex-colonial nations’ neutrality in the Cold War as opposition.

These critiques did not by themselves make Kennedy’s gravitas progressive. He called contemporary colonialism a loser’s game, and the competitive Kennedys had no sympathy for losers. So it was no surprise that in 1957, when the Soviet Union launched Sputnik, the first satellite to orbit the planet, Kennedy immediately supported upgrading the American military and sided with the position that there was a missile gap that needed to be closed.

When asked to describe himself, Kennedy told a reporter “I like to think of myself as a practical liberal.

When asked to describe himself, Kennedy told a reporter, “I like to think of myself as a practical liberal.” After much hesitation he supported universal hospital coverage financed through the Social Security Administration’s payroll tax and proposed that the federal government send money directly to local school districts to help fund operating costs, but not directly to parochial schools. In his 10-minute speech on Sept. 12, 1960, on the issue of American Catholic independence from papal authority before the hostile Greater Houston Ministerial Association, Kennedy spoke with perfect American diction: “If the time should ever come—and I do not concede any conflict to be remotely possible—when my office would require me to either violate my conscience or violate the national interest, then I would resign the office.” On the question of how religion influenced the vote, Oliphant and Wilkie judiciously conclude that, while Kennedy’s Catholicism lowered his voting percentage (49.72 percent to Nixon’s 49.55 percent), it increased his Electoral College numbers (303 out of 537).

While the authors display a deep interest in the ways Kennedy’s Catholic affiliation affected the presidential outcome, they show no interest in how, or whether, his Catholic faith affected his presidential judgments. Only here do Oliphant and Wilkie remain the contented outsiders.

In all matters J.F.K., a close look reveals more wrinkles. Years after his death, in a letter to Sorensen, Jacqueline Kennedy described him as “that unforgettable elusive man.”

James R. Kelly is an emeritus professor of sociology at Fordham University.