On his 100th birthday, J.F.K. points out the problems with politics 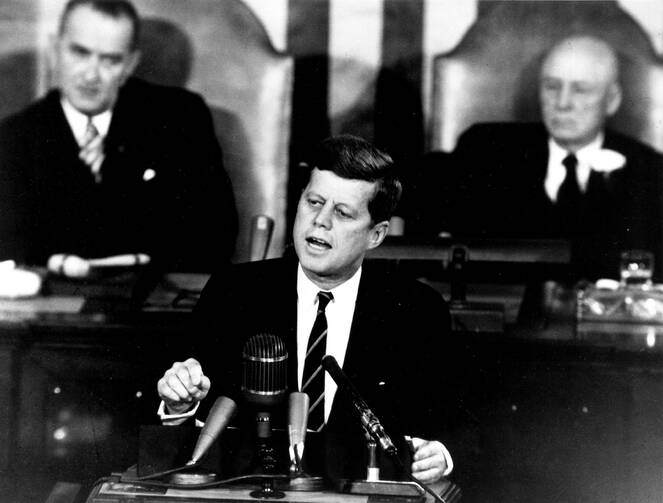 Sixty years ago this summer, in the wake of mounting political violence in French Algeria, the gentleman from Massachusetts, John F. Kennedy, took to the floor of the U.S. Senate to deliver his first major foreign policy speech. He concluded it with a bombshell. The United States should exert its influence in NATO, he said, to pressure France into granting independence to its North African possession. “The most powerful single force in the world today,” he said, “is neither Communism nor capitalism…but man's eternal desire to be free and independent. The great enemy of that tremendous force of freedom is called, for want of a more precise term, imperialism.”

The speech landed Kennedy on the front page of The New York Times and in hot water with the pro-French foreign policy establishment. President Eisenhower pointedly asked Kennedy to pipe down, saying that if he continued to “shout about such things,” Kennedy would undermine U.S. “neutrality” in the Algerian conflict. Dean Acheson, Kennedy’s fellow Democrat and a former secretary of state, said that Kennedy’s approach was no way to treat America’s oldest ally. Kennedy, according to Acheson, was also naïve: Didn’t the young man from Massachusetts (whom Acheson once privately called an “uncouth Irishman unfit for high public office”) know that French withdrawal from Algeria would lead only to further chaos?

Kennedy’s counterattack appeared in the pages of this magazine on Oct. 5, 1957. “I should like to take account of some of the recurrent criticisms that have been made of my remarks,” Kennedy wrote in America. What followed was a taut, incisive, compelling 2,500-word essay in which Kennedy not only rebutted his critics but revealed the basic elements of his emerging political philosophy. What the United States needed, he said, was a new strategic calculus based on principled realism rather than the shopworn worldview of his elders.

The audacious junior senator pulled no punches. In response to Ike’s claim that he had compromised American neutrality, Kennedy argued that in the realm of practical politics, when our values were at stake, there was no such thing as neutrality: “Our neutrality, we like to believe, signifies a benign attitude, but its surface appearance of tidy order and antisepsis in reality masks an attitude with consequences quite as positive as direct action itself.” To those who said that he had undermined the Western alliance, he said: “This is an extraordinarily quaint and archaic view of an alliance whose very conception was based on the hope that problems could be shared.” He then likened those who said that the United States should stay out of the conflict to “the chorus in the Greek tragedies"; mere passive observers whose fatalism was dangerously out of step.

Kennedy’s most powerful counterpunch landed on those who had argued that Algerian independence would create an opening for Communist incursion. Actually, he replied, the opposite was true: “The longer legitimate Algerian aspirations are suppressed, the greater becomes the danger of a reactionary or Communist takeover…. Moreover, such an impasse as that in Algeria makes it very difficult for the United States and its allies to mobilize opinion in the uncommitted world against the greater imperialist outrages of the Soviet Union.”

The great enemy of the truth is very often not the lie, deliberate, contrived and dishonest; but the myth, persistent, persuasive and unrealistic.

This last argument, that the United States needed to champion the freedom of the emerging post-colonial states, would reappear four years later in his inaugural address (see page 40 in this issue): “To those new states whom we welcome to the ranks of the free, we pledge our word that one form of colonial control shall not have passed away merely to be replaced by a far more iron tyranny.” The “iron tyranny” Kennedy had in mind was not just a Communist takeover of the developing world, but the inflexible dogmas that still dominated the Western imagination. In Kennedy’s judgment, ideological dogmatism, convenient half-truths and lack of imagination were greater threats to the body politic than the connivance of Communists. “The great enemy of the truth,” he later said, “is very often not the lie, deliberate, contrived and dishonest; but the myth, persistent, persuasive and unrealistic.”

May 29 marks the one hundredth birthday of President Kennedy. As we continue to reel from Washington’s partisan, ideological warfare, it’s worth remembering this month not just Kennedy’s eloquence, or foibles, or untimely death, but the principled realism and historical imagination he brought to our politics—qualities that he saw in a favorite story about Hubert Lyautey, the French Army general who had served in North Africa. Lyautey once suggested to his gardener that he plant a tree. The gardener told him that this particular tree would not flower for a hundred years. “In that case,” Lyautey said, “plant it this afternoon.”