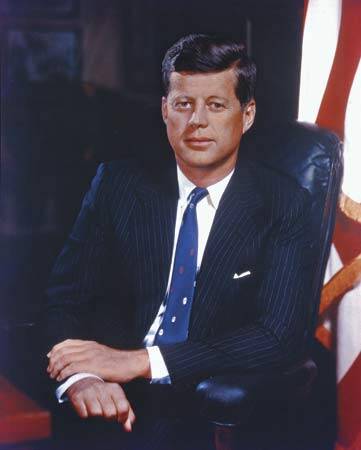 I cannot help but think about John F. Kennedy these days. I think of him not just because of that November day so long ago now, when he entered that limousine, smiled and waved, and met that cruel fate, with that limousine leaving behind in its wake a numbing ache that never went away and never-ending conspiracy theories that warped the national psyche, instead of the dreams, the goals and the promise he wanted the American nation to have and achieve.

In the years since—it seems—everything in politics, government and society has gone seriously out of whack and nothing works as it should. Nowadays, a day doesn’t go by without another report or instance of governmental gridlock, partisan sniping and pure bull-headed argumentativeness that passes for dialogue and conversation. No matter who gets elected and no matter what party controls the levers of power in the marble legislative halls, it all remains the same and the important tasks that need to be attended to remain unfinished and undone. And whatever happens to get done is done in a toxic spirit of vituperation that only increases the opportunity to constantly regurgitate the acid reflux that is in our political system.

It should never have gotten to be that way; what was once a proud partisanship has now become partisan poison and when—once—principled disagreement led to dignified compromise has given sway to threats, utter contempt and outright dismissal by those people supposedly elected “by the people” to serve the national interest, not just their own.  And that, unfortunately, is the America of today—and that is not the America President Kennedy would have envisioned, or left behind. But that is what we have.

And this is not the America I thought I would grow up in or live in.

Citizenship was meant to mean something: it wasn’t to be taken lightly or dismissively. Americans through the years fought and died for that ideal in order that it would continue to be a living reality instead of a few lines of theory in a school history textbook. When I was growing up, I was taught that it was my civic duty to vote when I came of age. It was not just a right, it was a privilege. I have always voted; and as my father taught me, I must examine the issues and examine the candidates who seeks the office for which they aspire. While I may belong to a political party, my father said, in the end I must decide which person will do the best job, regardless of whether that person be a Democrat or a Republican, or whether that position is local, state or federal—voting is meant to benefit and make better the society we live in.

But as it is, when I vote now, it is with a heavy heart. Many of the candidates that get selected and then elected do not really sit in the executive chair intent on the public good. No, an awful lot of them have their eye on the exit polls and on the next fundraising affair or scheme their schemes to stay in power and get their hands on even more levers of power so that it will redound to their benefit. Do not misunderstand me—there are still those in public life from both parties who go into public service intending to serve their fellow citizens, and they do, and often under less than ideal circumstances. But it is not they who get the attention, recognition or approbation.  Like many others, I realize this, and I am not surprised. And unlike many others, I don’t want to go down that slippery slope of apathy—or live there.  America can be better than that.

And that is why I have been thinking about John F. Kennedy these recent days. Were he here today, he would be aghast at the present political climate. To be sure, things weren’t easy in his time—and as a student of history, he would have pointed out that he understood and appreciated that every period has its challenges and difficulties. He would note that as a politician, an elected official, or as a “responsible officer of the government” (as he would say) it was what a person in public service is supposed to do—deal with those problems, make things better, make life easier, make our existence more tolerable, more fair—for, as he said, “we all breathe the same air…and we are all mortal.”  Reach consensus and be civil while doing it—that should be the modus operandi of the public servant. But sadly—and maddeningly—those who we elect to represent us in these times blatantly ignore it or conveniently forget it. And it is the country that suffers as a result of it.

In his brief time in the presidency, John F. Kennedy came to understand the larger issues of human existence and how often it is threatened, either by unknown forces and or by our own human folly. By the time that November 22nd of 1963 came around, he had begun to realize the delicacy of that task that is the responsibility of those entrusted with power over the lives of untold others. In an address that was meant to be delivered that day in Dallas, he spoke—almost prophetically—of the dangers of unreason and what it could do to our country.  It is something well worth pondering on this sad anniversary, and if somehow the American people of today would only heed his words and turn away from this political vitriol that presently passes for American governance, then perhaps this undelivered address will serve as President Kennedy’s political testament to the America that he lived, worked, hoped and died for. He demanded it, and so should we, the people.

Joseph McAuley
Show Comments (
1
)
Comments are automatically closed two weeks after an article's initial publication. See our comments policy for more.
Joshua DeCuir
8 years ago
I long for the day when Kennedy fantasms such as as this are no longer. The more we learn about the character of this person, the more absurb these flights of fancy become.