J.F.K. at 100: America’s Camelot has lost its sheen, but the vision lives on. 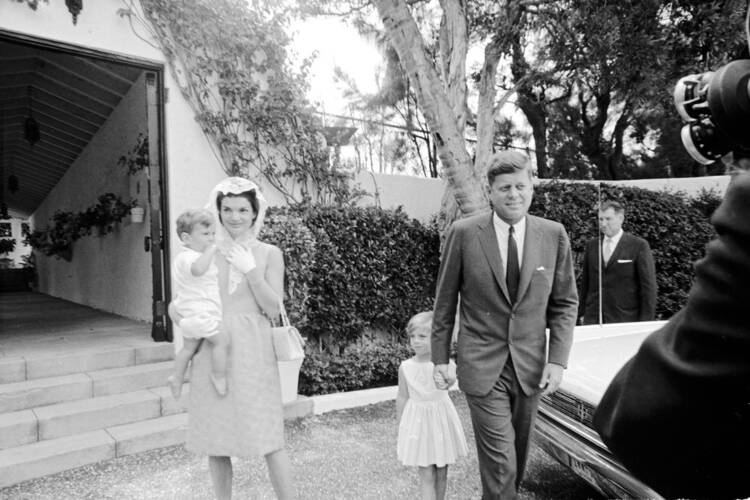 I first made the acquaintance of John Fitzgerald Kennedy in 1960. I was 8 years-old. Our family had flown from Philadelphia to Michigan to spend the summer vacation with relatives. The adults shushed us kids as they watched the Democratic National Convention on television. My uncle thought Mr. Kennedy’s nomination was in the bag. My father, ever the stoic Irishman, demurred: “Remember what they did to Al Smith in ’28.” We quickly learned to cheer the pro-Kennedy speeches and to boo the pro-Johnson ones. (I actually thought that Lyndon Johnson was Howard Johnson. I hoped that all the delegates would get ice cream.)

That autumn I marched in my first political demonstration. Although our row-house suburb was a Republican fief, John F. Kennedy was a sacred cause in the overwhelmingly Catholic neighborhood. We paraded by the one house festooned with Nixon posters. They were the lone Presbyterian family on the block, and rumor had it that their prim house with a tulip garden was a front for “real money” squirreled away in Switzerland. My mother said that we should pray for their conversion—to the true faith and to the true presidential candidate.

John F. Kennedy was a sacred cause in the overwhelmingly Catholic neighborhood.

When we came down for breakfast the day after the election, my father was ashen. “They think he’ll win, but just watch them rob us. ‘No Irish Need Apply.’” For once, he was wrong.

During the Kennedy years we joined the cult. Each classroom in our parish grade school displayed a drawing of “the two Johns” God had providentially given U.S. Catholics. Pope John XXIII and President Kennedy were sowing seeds of peace with the United Nations headquarters towering in the background. (If they walked a few more paces, they would be floating in the East River.) On our kitchen wall hung a Sunday-supplement color photo of the Kennedy family in their finery on Easter Sunday. (Jackie’s white chapel veil would decimate the hat industry and ignite a run on Mantilla veils.) Up the block, the Kellys framed the same photo, placed a votive candle in front of it and positioned it between the mantle statues of Mary and Joseph. The Kennedys were not simply the nation’s most stylish family; they were the ideal Catholic family wearing Catholic clothing (that chapel veil) off to Catholic Mass on Easter Sunday. We had arrived.

The Kennedys were not simply the nation’s most stylish family; they were the ideal Catholic family.

Like other Baby Boomers, I remember where I was when I heard the news of President Kennedy’s assassination. As we were plowing through multiplication tables in our seventh-grade class, mother superior made an intercom announcement. The president had been shot in Dallas. Every teacher led her class in reciting the rosary aloud. And then came the news that President Kennedy was dead. We walked home in silence. It seemed that every mother had turned out to greet her children as they left school, but the women only whispered.

On the day of the funeral, our parish held a memorial Mass for the slain president at 8 a.m. In black vestments the priest celebrated a quick low Mass: no music, no incense, no sermon, no congregational responses. This mute, overflow assembly expressed a grief that no words could capture. The nation had lost a popular leader. But the Irish Catholics of Glenolden had lost a beloved uncle who had just conquered the world against the bitter prejudice they faced. He was ours.

This year we celebrate the centennial of President Kennedy’s birth. The glitter has long since vanished from Camelot.

This year we celebrate the centennial of President Kennedy’s birth. The glitter has long since vanished from Camelot. We now know that his grave maladies and dangerous cocktail of drugs—hidden from the public by a sycophantic press—should have disqualified him from office as commander-in-chief. We know that his serial adulteries endangered national security. Even his courageous brinkmanship during the Cuban Missile Crisis now seems reckless. Was the Russian installation of missiles on Cuban soil really more provocative than the earlier American installation of missiles on Turkish soil, a stone’s throw away from the Soviet Union?

And yet the words and the vision remain.

President Kennedy’s acceptance speech at the 1960 Democratic National Convention in Los Angeles embodied a chastened liberalism: long on duties, short on entitlements.“The New Frontier of which I speak is not a set of promises—it is a set of challenges,” he said. He reminded the nation of the sacrifices it must undertake in the twilight struggle against totalitarianism. The flame of freedom was not a cliché. For Mr. Kennedy it was precisely what had made the United States different from other conquering nations. This was American exceptionalism. In the presidential pulpit he underlined at what price this liberty had been purchased in the past and must be redeemed in the present.

Such a rhetorical legacy might seem a small thing compared to the New Deal or the civil rights accomplishments of his successor. But given our current political culture of partisan invective, braggadocio and self-pitying victimhood, John F. Kennedy’s austere brand of patriotism still shines.

Correction: This article incorrectly attributed a quote to President Kennedy’s inauguration speech. The quote was from in speech at the Democratic National Convention.

Did you know that JFK broke all the rules to fly to Ireland in July of 1963? The magnetic pull of the ancestral homeland was ineluctable.

Fr. Conley (who had the misfortune of teaching me once upon a time at Fordham) offers some interesting reflections on the JFK of his youth.

I read that Mrs. Kennedy was bitterly disappointed when informed that her husband's killer, Lee Harvey Oswald, was a pro-Soviet, pro-Castro Marxist instead of a member of the Ku Klux Klan or the John Birch Society (or both). She hoped that Kennedy would be seen as a martyr for civil rights. Instead, she said, "he died for nothing."

My opinion is that the CIA was an accessory to his assassination, because they believed he'd attempt to end the Cold War and withdraw American forces from Vietnam. Not that they killed him, but that they withdrew his security in order to allow the mafia and the Cubans who hated him access. Johnson, Nixon and Bush knew what was coming--all were in Texas, where Johnson reportedly told his mistress of the time, "after tomorrow, I'll be free of those damned Kennedys." Robert Kennedy was murdered by the same network because he had expressed interest in re-opening the investigation into his brother's death. RFK's autopsy details reveal that he was shot from behind, into his neck, not from the direction Sirhan Sirhan was standing in; additionally, the walls of the hotel kitchen were sprayed with bullet holes shot from the direction in which Sirhan was facing, indicating again that the shooter or shooters were behind Robert Kennedy. Both Kennedy brothers were murdered for challenging the intelligence agencies and the military-industrial complex President Eisenhower had warned of. These assassinations changed 20th century American history for the worst.