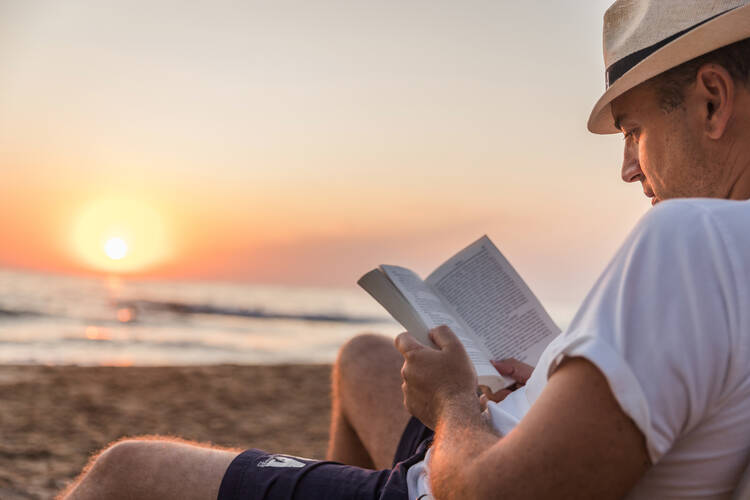 July is the cruelest month, breeding heat waves out of the dead land, and this column writer is on vacation in cooler climes. As a result, we would like to offer you a roundup this week of some of this year’s top Catholic Book Club columns, just in case you missed a few.

We started this column about nine months ago to replace a weekly CBC newsletter that profiled our latest offerings from America book reviews. The idea was to focus on a particular writer or group of writers whose work had been reviewed in America (or who had written for the magazine themselves), making use of both our 113 years of archives and our ongoing literary coverage. Our very first offering was Jonathan Franzen, followed quickly by Sally Rooney and Phil Klay, but we soon branched out into authors with pedigrees more venerable.

Readers loved our quick look back at Wendell Berry, “the cranky farmer, poet and essayist you just can’t ignore.”

We had a lot of fun reviewing America’s coverage of Joan Didion, including a 1977 review of A Book of Common Prayer by Elizabeth Woods Shaw. “Joan Didion uses language and controls structure so artfully that from the welter of futile speech and action she dramatizes so vividly comes a clear statement on the human condition,” wrote Shaw. “The mirror she holds up to nature reflects crazily angled, grotesque images; but the reflections themselves are so sharp that watching them provides a rare aesthetic pleasure.”

Readers loved our quick look back at Wendell Berry, “the cranky farmer, poet and essayist you just can’t ignore.” We cited a 2019 review by frequent America contributor Jon Sweeney, who praised Berry’s lyrical prose. “There is always movement in Wendell Berry’s sentences. He writes about what he has experienced, what he has learned, and always with humility for what he does not know. The natural world is his primary teacher: its rhythms, its largesse, its mysteries,” Sweeney wrote. “And in the essays, the natural world often reflects how change in humans is also natural, inexplicable and possible. I think this is what many who love his writing appreciate most about Berry, whether they realize it or not.”

The death of Dr. Paul Farmer in February 2021 was a terrible shock to many; his service to the poor and his writings on social justice were just two visible manifestations of his holy witness. We used this space to focus on him that month, including ​​a tribute in America by the Rev. John Dear, who had been his friend for more than four decades. Father Dear called him “a great humanitarian, peacemaker and saint,” a “visionary who reclaimed the imagination, the new possibilities, of what it means to be human, of what the world could be.” Dr. Farmer also wrote for America himself on three occasions, including an essay on medicine and liberation theology in 1995, on Haitian refugees and globalization from 2003 and a long reflection from 1993 on Graham Greene’s 1965 novel The Comedians.

Father Spinale on The Ninth Hour: "It will provoke contemplation and prayer. It is a Catholic book, and it will seep into you like indigo into a clean, pure bolt of cloth."

One of America’s most prominent literary editors over the years was Leonard Feeney, S.J., a man whose skills with the written word were eventually overshadowed by his excommunication from the Catholic Church for rejecting the church’s understanding of the doctrine of salvation. The Jesuit priest was the author of Fish on Friday, a collection of theological essays that remains in print today; Cardinal John O’Connor, the archbishop of New York from 1984 to 2000, said in 1994 that he read Fish on Friday every Lent. Father Feeney also worked at America from 1936 to 1942. We featured Father Feeney in this space in March 2021, with a link to his somewhat quixotic 1936 attack on Robert Frost, and also included the 1978 obituary for him by Avery Dulles, S. J.

And last but not least is a writer recently featured in this space but already well-known to many of America’s readers: Alice McDermott. Three of her novels have been finalists for the Pulitzer Prize, and Charming Billy won the National Book Award in 1998. In 2018, the Catholic Book Club used McDermott’s The Ninth Hour as its Fall selection, with an interpretative essay by CBC moderator Kevin Spinale, S.J.; the novel had previously been reviewed by Jenny Shank for America. “Alice McDermott has once again delivered a novel to ponder and cherish, from its moral quandaries down to its wry humor and hypnotic prose,” wrote Shank, calling her “perhaps today’s pre-eminent American Catholic novelist.”

“I cannot recommend reading this novel enough—and rereading it as well,” wrote Father Spinale. “It will provoke contemplation and prayer. It is a Catholic book, and it will seep into you like indigo into a clean, pure bolt of cloth.”

We invite you to keep reading every Tuesday as we roll out new columns and profile new authors. Oh, and you can read all of our selections for this weekly column here.

We also feature a poem every week from the pages of America, all overseen by our poetry editor, Joe Hoover, S.J. Readers can view all of America’s published poems here.