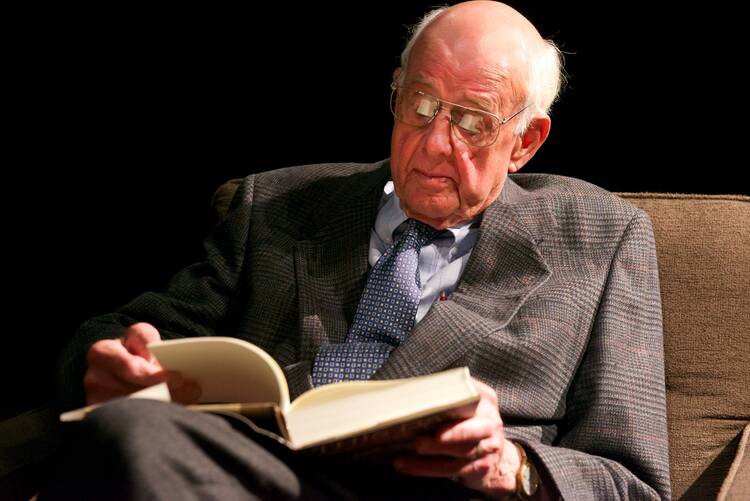 Wendell Berry reads one of his poems from at the 2014 Festival of Faiths. (Wikimedia/Creative Commons)

A writing project for America’s Advent reflection series last week gave me occasion to revisit a favorite poem (“IX”) by an author who knows more than most about seasons, both liturgical and agricultural: Wendell Berry. Now 87 years old, this man of many labels (Is he a farmer? A novelist? An environmental activist? An essayist? A poet? A cultural critic? A cranky old professor? A Christian prophet?) has been a voice of practical reason and concise cultural commentary in his more than 80 books published over six decades.

My own first encounter with Wendell Berry’s writings was not through his poetry, but his essays. It came in college, when a philosophy professor (now retired, he recently ran for governor of California; philosophy professors rule) assigned Another Turn of the Crank, Berry’s book of five essays on the global economy, health care, forest preservation, private property and wealth and ecology. In a 1995 review for America, Patrick Samway, S.J., wrote that “all of these essays address the mind and heart with the same forcefulness and clarity as the writings of Annie Dillard, Henry David Thoreau or Wallace Stegner.” To that august list I think I would add distributists like Peter Maurin and G. K. Chesterton and early Garry Wills (included here mostly so I could write “early Garry Wills”), but at the time my college-student reaction was a simple one: Did Wendell Berry just leap off the page and hit me over the head with a fencepost?

My reaction was a simple one: Did Wendell Berry just leap off the page and hit me over the head with a fencepost?

The writing was lyrical but commonsensical and practical. Berry, who had returned decades before to the farming life of his childhood and was an advocate for time-tested agrarian living, drove home the point that the United States had been built on certain principles—respect for the land, shared small communities and economies, the handing down of tried and true traditions and lifestyles, an assumption that a life of faith was a natural one, a management of resources that allowed for seasonal cycles—that were all being abandoned, sacrificed to the gods of technological innovation, individualism, commercialism and unfettered capitalism.

I argued in my final paper for the class that Berry was right, but his solution was wrong: The only solution was Christian Marxism. (Can it be there was only one year I was 21? It must have been a long one then.) In sharp, practical prose reminiscent of Berry himself, the professor tore my essay apart. But I still remember the book well.

If you ask Berry’s many fans, that slim volume isn’t usually among their favorites. Berry first made his bones with his poetic works of the 1960s and 1970s, like The Broken Ground (1964), and many environmentalists and distributists hold dear his 1977 collection of essays, The Unsettling of America: Culture and Agriculture. His novels—the first, Nathan Coulter, was published in 1960—have their own fans, and you can usually find them gravitating toward his “Port William novels” like Hannah Coulter (2004) or Jayber Crow (2000). (Keep your ears peeled next time you’re at the farmer’s market—one chance in 12 that guy selling you homemade mead named his son Jayber.)

Keep your ears peeled next time you’re at the farmer’s market—one chance in 12 that guy selling you homemade mead named his son Jayber.

In a 2019 review for America of What I Stand On, a husky two-volume anthology of Berry’s writing edited by Jack Shoemaker, Jon Sweeney identified exactly when he became a Wendell Berry enthusiast: at the age of 16. The owner of a bookstore in the suburbs of Chicago that Sweeney haunted as a teenager gave him two of Berry’s books, The Wheel (a book of poems) and Recollected Essays, and said “I think you should get to know this author.” Sweeney did her one better, becoming so obsessed with Berry’s writings that he decided a few years later to undertake an impromptu pilgrimage to Berry’s farm in Port Royal, Ky. Alas, Berry wasn’t home, but it didn’t dampen Sweeney’s enthusiasm for his writings.

“There is always movement in Wendell Berry’s sentences. He writes about what he has experienced, what he has learned, and always with humility for what he does not know. The natural world is his primary teacher: its rhythms, its largesse, its mysteries,” Sweeney wrote. “And in the essays, the natural world often reflects how change in humans is also natural, inexplicable and possible. I think this is what many who love his writing appreciate most about Berry, whether they realize it or not. For his Christian readers, this becomes an expansion of what we understand as conversion.”

The focus on conversion can seem a bit ironic in Berry’s case, because at first glance he doesn’t seem to be much of a fan of change in general. “He frequently questions society’s attempts to improve things, modernize or make ways of living more efficient. Those words—improve, modernize, efficient—might as well be in quotation marks whenever they appear in a Berry essay. He doubts them consistently,” Sweeney continued.

There were moments in the anthology where Berry made Sweeney’s hackles rise: “He is not always right. Any essayist worth reading will anger and annoy you from time to time. Berry can be cranky.” On the other hand, “his wisdom, and his call to better habits, is too essential. To ignore Wendell Berry is like trying to ignore your grandmother: You just can’t.”

“There is always movement in Wendell Berry’s sentences. He writes about what he has experienced, what he has learned, and always with humility for what he does not know."

Two years before Sweeney’s review, Anna Keating wrote a review for America on Laura Dunn’s new documentary, “Look & See: A Portrait of Wendell Berry.” In the film, an 83-year-old Berry “reads his essays in a Southern drawl over images of his working farm, the land he and his family have cultivated in Kentucky for five generations. He and his wife returned to this land after graduate school, in search of home and sense of place or, as William Faulkner once called it, ‘significant soil,’” Keating wrote.

The filmmakers never interview Berry on camera; rather, they try to take viewers into Berry’s world: “You hear the sound of footsteps as an unseen person walks through the hills or around the farm. You get to know some of the people Berry loves: his wife and collaborator, Tanya, his daughter, Mary, and his fellow farmers, both industrial, subsistence and organic.” Berry, Keating wrote, “is an advocate of small farms, rural communities and Judeo-Christian values like kindness, all of which have been harmed by ‘get big or get out’ industrial agriculture. His life and work bear witness to the fact that it is never Christian to say, ‘I can do whatever I want with my own land’ or ‘my own body.’ We are stewards, not owners. What’s more, the attitude of ‘I can do whatever I want’ is toxic to earth and water, family and community.”

Keating owns a small business with her husband, and has a particular interest both in Catholic social teaching and in distributist writers, including the aforementioned Chesterton and Maurin but also Hilaire Belloc and Dorothy Day. She defined distributism as a way of thinking that “seeks to unite what has been separated, labor and capital, through the ownership of small businesses and farms or through the ownership of tools and a trade or through participation in a guild, so that wealth is not consolidated in the hands of a few wealthy individuals (capitalism) or in the hands of the state (socialism).” She found that the life Wendell Berry has created and the views he espouses “both are in line with this vision and can prove helpful to Catholics, serving as an antidote to the many ills of our time.”

There’s plenty more in the America archives on Wendell Berry, including this 2009 appreciation by fellow writer-farmer Kyle T. Kramer and this 2017 interview by Sean Salai of Berry’s daughter Mary, the executive director of the Berry Center in New Castle, Ky., a non-profit organization dedicated to promoting the legacy of her father.

"His life and work bear witness to the fact that it is never Christian to say, ‘I can do whatever I want with my own land’ or ‘my own body.’ We are stewards, not owners."

Willie James Jennings and the academic culture of exclusion

Who is the next great Catholic novelist? Is it Sally Rooney?