The rhythm of the hours: Alice McDermott's new novel, ‘The Ninth Hour’

The rhythm of the hours: Alice McDermott's new novel, ‘The Ninth Hour’ 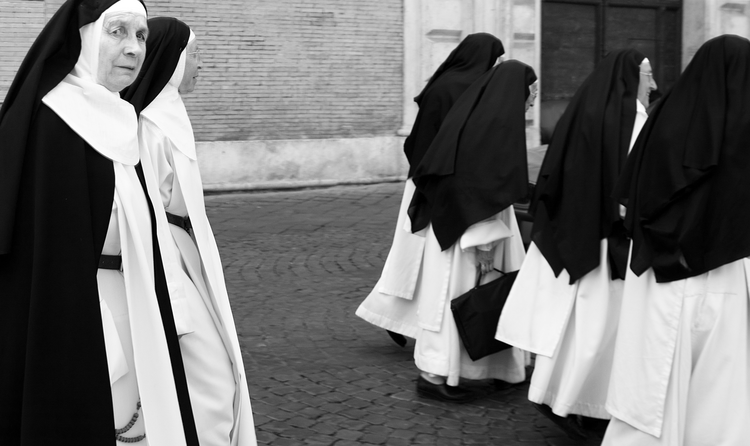 As I age, I realize how Catholic I am. Catholicism—the history and culture of its American form—has been dyed into me like a garment taking on a color; I have absorbed Catholicism like a bolt of linen cloth taking on indigo. Catholicism cannot be washed out of me. And, the principal dyers, the people who helped define me by my Catholic faith, were my aunts.

Aunts. There were always several aunts around as I grew up. Some were old, others were less old. Some were never married, others were widowed. One was a nun—Jane Francis Igo, S.N.D. Her personality was one of defiance, humor, fierce intelligence and warmth. She died very young, but she dyed me up Catholic pretty good. She rendered me Catholic through the force of her personality and through the gift of wonderful books, particularly an illustrated Bible dictionary for kids and comic book renditions of the Gospels. What she left un-Catholic in me, my Aunt Lil finished off.

As I read and contemplated The Ninth Hour, I could not help but think of the aunts of my own life—women who shaped me and planted a faith into me that I cannot shake because their goodness was so clear, so evident to me.

Alice McDermott’s new novel is a wonderful Catholic book, and, as I read and contemplated it (and it is a book you will contemplate), I could not help but think of the aunts of my own life—women who shaped me and planted a faith into me that I cannot shake because their goodness was so clear, so evident to me.

The Ninth Hour is, at its heart, the story of a girl and her three adoptive aunts: Sister Illuminata, Sister Lucy and Sister Jeanne. It is the story of Sally absorbing the soliloquies of these three women and coming to understand faith to be something that involves suffering aimed at transforming evil into goodness and order—filth laundered into spotlessness.

While reading McDermott, I kept thinking of a poem by Dan Berrigan that a spiritual director offered me a long time ago:

With eyes a dying candle
with voice telling the years awry
my aunt at her high window
counts the seasons by —
bird wedges or air of snow
or red leaves of a leaning sky.
Eighty-one years have whittled her hands
white coals have whitened her sweet mouth:
Christ has fountained in her eyes
and crumpled her face to drought:
flood and drought, He entered once —
in and never out.
It was all gardens then: young winds
tugging her trees of cloud.
At night His quiet lay on the quiet
all day no bird was loud:
under His word, His word, her body
consented and bowed.
And what is love, or what love does
looks from a knot of face
where marching fires could but leave
ruin and gentleness in place:
snatched her away, and left her Self:
Christ to regard us, Face to face.

Three aunts dominate McDermott’s novel. Theirs is not a Marian spirituality but a Christocentric one—as it is for the aunt in Berrigan’s poem. Their Christology is anchored in “the ninth hour,” the moment of Jesus’ death on the cross. These three aunts speak continuously of suffering, sin, reparation and restoration. They work tremendously hard, and their hands are crooked from toil and boiled raw from struggling to cleanse the filth they encounter.

Yet, they also love. They sin, they rage and resent, and they vie for the attention of a girl who grows up in their convent laundry room. In their speeches, their dispensing of wisdom and autobiography, these three nuns try to shape Sally into something like themselves. For the most part, they succeed: Sally, all grown up, takes notions of substitution, reparation and restoration to heart. Ultimately, this is how Sally tries to love and ease her own pain—her own ninth-hour feeling of abandonment.

The prose is pristine. The aunts, the three nuns, are wonderful characters. They are human, thoughtful, honest and funny. The book also gives a wonderful glimpse into Catholic life in Brooklyn in the early years of the 20th century.

Well, I hope I have not dampened your interest in this book already. It really is beautiful. The prose is pristine. The aunts, the three nuns, are wonderful characters. They are human, thoughtful, honest and funny. The book also gives a wonderful glimpse into Catholic life in Brooklyn in the early years of the 20th century.

Beyond these three nuns, the novel describes Annie, Sally’s mother, who is widowed when her husband succumbs to his own despair. We gain glimpses into Annie’s interiority but only glimpses. The nuns match Annie up with Liz Tierney, Annie’s friend and mother of a sprawling family, who offers her own soliloquy on Catholicism. There is also a real aunt: Aunt Rose, a “married nun” who carries within her some notions of reparation as well. Finally, the book depicts Mrs. Costello, an invalid who suffers from abandonment and physical deterioration.

Men remain a ghostly presence in the novel, as does Sister Saint Saviour. Sister Saint Saviour takes charge in the opening pages of the novel and then vanishes. Her odd name, a masculine one that refers directly to Jesus himself rather than some saint, will color Sally’s life and, perhaps, her notions of suffering and love. Sister Saint Saviour had a “mad heart...mad for mercy...mad for her own authority in all things — a trait Annie had come to love and admire — but mad nonetheless.” Annie does find her independence—she’ll “catch her breath” and “speak up”—but such independence will affect her daughter, whom she had been so afraid to lose.

Finally, the book is about laundry and time. Laundry and time. While Sister Jeanne and Sister Lucy go out on their nursing rounds, caring for the sick and homebound with expertise and care, encountering human suffering directly, Sister Illuminata works daily in the convent basement washing the soiled linens and the bloodied bandages of the patients the nursing nuns visit, as well as the habits and intimates that the nuns wear themselves. Sister Illuminata, perhaps the aunt who has the greatest impact on Sally, imparts the following philosophy on her young helper:

A sister makes herself pure, Sr. Illuminata said, immaculate and pure, not to credit her own soul with sacrifice — her giving up of the world — but to become the sweet, clean antidote to suffering, to pain. ‘You wouldn’t put a dirty cloth to an open wound would you?’

Down here [the laundry] we do our best to transform what is ugly, soiled, stained, don’t we? We send it back into the world like a resurrected soul. We’re like a priest in his confessional, aren’t we?’

And such work takes time. It is real toil, both the nursing and the laundering. The work is relentless: the laundering, the restoring to cleanliness and the binding up of wounds with clean cloths take time. And it is time that seems to be the nuns’ greatest sacrifice. Time is what Sally’s father relished, and his refusal to live on someone else’s time actually “endangers others,” including Sally and her mother. At the beginning of the novel we learn of Jim’s relishing of his own time: “Sometimes just the pleasure of being an hour or two late was enough to remind him that he, at least, was his own man, that the hours of his life — and what more precious commodity did he own? — belonged to himself alone.” The nuns launder Jim’s disastrous choice for his own time as best they can. They are only human, and, ultimately, they are guided by their love.

I cannot recommend reading this novel enough—and rereading it as well. It will provoke contemplation and prayer. It is a Catholic book, and it will seep into you like indigo into a clean, pure bolt of cloth.

I am ordering it now! What a beautiful review. I loved the poem so, so much. I brought tears to my eyes.

Kevin Spinale, S.J., is the moderator of the Catholic Book Club and a professor at Fairfield University.

Review: When #MeToo meets the church
In her new book, Ruth Everhart offers striking juxtapositions of biblical stories, parables and teachings with present-day experiences of sexual abuse in the church.
Lauren D. SawyerJanuary 24, 2020

Review: Paul Mariani on why poetry sustains us
The “Catholic sacramental perspective,” as Mariani terms it, urges the poet to recognize in even “the meanest thing” some glimmer “of inestimable worth,” some sign of the Creator.
Lesley ClintonJanuary 24, 2020