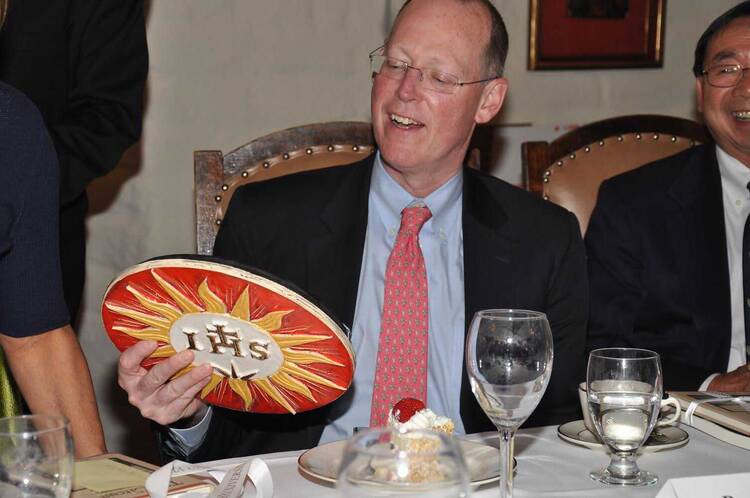 The unexpected death of Dr. Paul Farmer on Feb. 21 brought an outcry of sadness from his family, friends, patients and countless admirers. In media outlets around the world, he was rightly lauded for his pioneering work with his global nonprofit medical group, Partners in Health, and his advocacy for the poor and the marginalized, especially in Haiti and Rwanda. A quote of Farmer from Tracy Kidder’s Mountains Beyond Mountains, “The idea that some lives matter less is the root of all that is wrong with the world,” became something of a shorthand for Dr. Farmer’s life in medicine and in advocacy for justice.

America published a tribute to Dr. Farmer last week by the Rev. John Dear, who had been his friend for more than four decades. Fr. Dear called him “a great humanitarian, peacemaker and saint,” a “visionary who reclaimed the imagination, the new possibilities, of what it means to be human, of what the world could be.”

Paul Farmer: “In a sense, Greene was a precocious Catholic who anticipated, but could not elaborate, a theology that declared, with simple clarity, God's ‘preferential option for the poor.'"

In 2021, the noted theological ethicist James Keenan, S.J., reviewed Dr. Farmer’s latest book, Fevers, Feuds, and Diamonds: Ebola and the Ravages of History, for America. The book chronicles Farmer’s attempt in October 2014 along with others from Partners in Health to provide health care for the poor in Sierra Leone, Liberia and Guinea. In the midst of an Ebola outbreak, they found themselves working in an area left destitute by a long legacy of slavery, resource extraction, colonialism and warfare. As a result, Farmer wrote, the people of the region had been left “with a public health desert, which is why Ebola spread, and a clinical desert, which is why Ebola killed.”

“Farmer goes deep into history to explain how colonial control suffocated the natural life out of the once enormously prosperous triangle of nations, leaving it a clinical desert,” Keenan wrote. “His account of slavery, resource-extraction, subjugation, social theft, the breakdown of local society and the resulting civil wars helps us see why Ebola had a chance to thrive in the triangle. Throughout, Farmer narrates the pervasive colonial disinterest in the health of and care for the local people.”

At the same time, Keenan noted, Farmer’s book included stories of hope and resilience, including powerful personal stories of victims who survived to become caretakers themselves.

“Buy three copies of this book,” Keenan wrote. “Give the first to someone who wants to become a health care worker, to keep him or her from ever adopting the neoliberal call to emphasize controlling pandemics without caring for victims. Give the second to thank a Covid-19 health care worker who learned “expert mercy” in the face of mortal contagion. Keep the third copy for yourself. It is unforgettable.”

Dr. Farmer wrote for America himself on three occasions, including an essay on medicine and liberation theology in 1995 and on Haitian refugees and globalization from 2003. Another intriguing article was this long reflection from 1993 on Graham Greene’s 1965 novel The Comedians. Set in Haiti, where Farmer was already working at the time, the book “introduced the English-speaking world to the methods of governance of président-a-vie Francois Duvalier. Following the novel's publication, both Greene and his book were banned in Haiti,” said Farmer. “Papa Doc,” it seemed, was outraged by Greene’s dissection of his tyrannical dictatorship.

Papa Doc eventually handed off power to his son, Jean-Claude “Baby Doc” Duvalier, who was finally driven from the country in 1986. “A few months after the fat and kleptomaniacal dictator was overthrown, the celluloid version of Greene's novel came to town,” Farmer remembered. “Working in a clinic in central Haiti, I resolved to travel to Port-au-Prince and see the film on the day it opened. I say day because there was, at the time, a curfew—I don't recall whether or not the curfew was declared, but the fact remained that bullets were whizzing around town, most of them fired by soldiers at civilians.”

Paul Farmer: Graham Greene came to be "on the side of the poor and the oppressed, a sympathetic fellow traveler who understood their suffering and their hope.”

Farmer found himself drawn to the character of Dr. Magiot, a Haitian doctor and a committed Communist. He quoted at length from Greene’s novel this confession from Dr. Magiot:

I have grown to dislike the word ‘Marxist.’ It is used so often to describe only a particular economic plan. I believe of course in that economic plan—in certain places and in certain times, here in Haiti, in Cuba, in Vietnam, in India. But Communism, my friend, is more than Marxism, just as Catholicism—remember I was born a Catholic too—is more than the Roman Curia. There is a mystique as well as a politique.

Further, Dr. Magiot notes, “Catholics and Communists have committed great crimes, but at least they have not stood aside, like an established society, and been indifferent. I would rather have blood on my hands than water like Pilate,” and “I implore you—a knock on the door may not allow me to finish this sentence, so take it as the last request of a dying man—if you have abandoned one faith, do not abandon all faith. There is always an alternative to the faith we lose. Or is it the same faith under another mask?”

It is a parallel Greene would draw again in his later works, including The Power and the Glory, where there are only two true believers: the committed Catholic and the committed Communist. (Greene usually prefers the former but recognizes the logic of the latter).

“In a sense, Greene was a precocious Catholic who anticipated, but could not (not from his desk in Antibes, in any case) elaborate, a theology that declared, with simple clarity, God's ‘preferential option for the poor,’” Farmer noted. “Greene traveled to where the poor lived and died, and his most compelling works are set there. When asked by a friend what drew him to Latin America, Greene responded, ‘In those countries politics have seldom meant a mere alteration between rival electoral parties but have been a matter of life and death.’”

“Graham Greene's fictional characters often locate themselves on the periphery of grand struggles—West versus East or non-West, colonialism versus independence movements, Communism versus Capitalism,” Farmer wrote in words that would describe Farmer himself in some ways in the years to come: “But the writer himself was never comfortable with any of these totalizing frameworks. He came to be, rather, on the side of the poor and the oppressed, a sympathetic fellow traveler who understood their suffering and their hope.”