Review: How the Catholic Church did—and didn’t—respond to the AIDS crisis 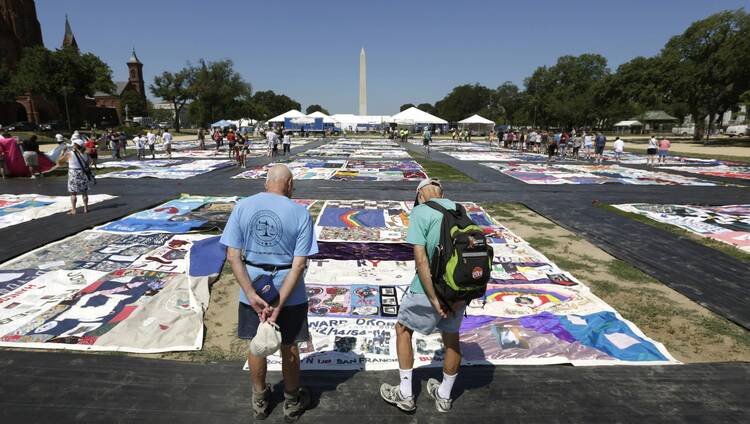 Two men look at a panel of the AIDS Memorial Quilt as it is assembled on the National Mall June 27 in Washington on June 27, 2012. (CNS photo/Kevin Lamarque, Reuters)

In an essay on “The Church of the Saints” in 1995 (later published in Theological Investigations, Vol. 3), Karl Rahner, S.J., remarked on the anonymity of the saints, especially the many saints whose lives remained hidden in their own times and places. “The greatest part of holiness must take place in silence, in being taken for granted and in forgetting about self,” he wrote, “so that even the right hand of the Church does not know what the left hand is doing.”

Anticipating the praise of Elizabeth Johnson, C.S.J., of these “ordinary people in ordinary time” whose holiness witnesses to the presence of the Spirit in the church as much as the equally extraordinary “paradigmatic” saints do, Rahner suggests that while the church must know explicitly about some of its holy ones, “quite possibly (who can say?) [the church] does not know anything at all about many of her greatest glories.”

In his book Hidden Mercy: AIDS, Catholics, and the Untold Stories of Compassion in the Face of Fear, the journalist (and national correspondent for America) Michael O’Loughlin has named some of the greatest hidden glories of the Catholic Church’s responses to H.I.V./AIDS in the 1980s and 1990s in the United States. The book is the continuation of a project O’Loughlin began with his America Media podcast “Plague” and tells in detail the stories of Catholics—religious sisters, laypeople and clergy—who responded to the onslaught of H.I.V./AIDS. O’Loughlin has done invaluable work by excavating and preserving these stories—of healing Masses and caregivers, of Catholic institutions like Saint Vincent’s Hospital in New York City and Most Holy Redeemer Parish in San Francisco—that met the challenge of the time and of ordinary Catholics being Christlike in extraordinary times.

O’Loughlin has done invaluable work by excavating and preserving stories of Catholic institutions and individuals that met the challenge of the time.

Three individuals provide the major threads around which the other stories are woven. The first is Carol Baltosiewich, O.S.F., a member of the Hospital Sisters of Saint Francis from Belleville, Ill. After an early hospice experience with a young gay man with AIDS who had returned home to Illinois to die, Baltosiewich recognized that H.I.V./AIDS would be coming to southern Illinois. More important, she realized that as a Catholic, a sister and a nurse she needed to help her community prepare and respond. With a fellow sister and the support of her community, Baltosiewich moved to New York for a short-term immersion in H.I.V./AIDS care. This led to an equally life-changing crash course in the realities of gay men’s lives before she returned to Belleville to create a space of acceptance and care for the inevitable advance of H.I.V./AIDS in her smaller community.

The second personality O’Loughlin highlights is the gay Catholic priest and iconographer William Hart McNichols. Many Catholics might already recognize McNichols’s work as an iconographer, which has been celebrated for decades and graces thousands of Catholic parishes and homes around the world. What may be unfamiliar to many is the story O’Loughlin tells of McNichols as a young Jesuit doing pioneering and heroic ministry to gay men with H.I.V./AIDS in New York during the height of the epidemic. For those of us used to the arid comfort of the southwestern landscapes that populate McNichols’s icons, picturing him as an out, gay Catholic priest in the wildernesses of 1980s New York explains and adds to some of the fire of those images. Looking at his artistic, activist creations of that time and at the icons he paints today, one newly perceives that McNichols’s attention to the heavenly is grounded in his experiences of what was a kind of hell.

The third personality is that of the author himself. O’Loughlin’s decision to tell his story as a journalist and a gay Catholic is the source of both the beauty and the limitations of Hidden Mercy. This book is not a dispassionate academic investigation of this history, which awaits and warrants much more extensive treatment in Catholic studies and American Catholic history. Rather, O’Loughlin starts from within the more personal framework of contemporary podcasts in which the storytellers remain part of the stories they tell.

O’Loughlin’s careful attention as a journalist and his identity as a gay Catholic allowed him to uncover these stories of our community’s past.

As a gay Catholic myself, I resonated deeply with O’Loughlin’s experience of the coming-out process of gay Catholics as always fraught and never finished, and with his experience of H.I.V./AIDS as a kind of cloud in the room of gay Catholic spaces. These were experiences never to be forgotten by our (far too few) elders who survived the plague, and yet experiences that, to those of us coming of age after the worst had passed, seemed at times like a hidden family secret, a tragedy remembered but unspoken and a source of pain to which we would never really have access. O’Loughlin’s careful attention as a journalist and his identity as a gay Catholic allowed him to uncover these stories of our community’s past, and to do so in way that draws the reader into his own experience of this search.

For that reason, this book is not only about the untold stories of the Catholic Church in response to H.I.V./AIDS but is also fundamentally a book about the untold stories of gay Catholics and of gay Catholic fidelity to a church that often seems to reject them. O’Loughlin’s paradigmatic figures, like McNichols and Baltosiewich, stand in for the hundreds of small acts of faith, hope and love by individual gay Catholics and by other Catholics who cared for them that have always been there, hidden, in the history of the church.

We do well to look to these stories of light as a source of hope but also to remember, as a warning, the darkness in which their light shone.

The stories O’Loughlin uncovers, though, inevitably leave some stories out. Because the book focuses on gay Catholics in relation to H.I.V./AIDS, this is inevitably a story of gay male Catholics—an important story, to be sure, but only a piece of the wider stories of L.G.B.T.Q. Catholic holiness. The stories of the Catholic Church’s responses to H.I.V./AIDS outside the gay male community similarly are less prominent. Further work would need to look more directly at where the church did and did not respond to H.I.V./AIDS in other populations, then and today, besides self-identified gay men. Nevertheless, O’Loughlin’s openness and honesty suggest the value of this book not as a final word but as an invitation to further research, further documentation and further telling of these undertold stories.

What reporting on the AIDS epidemic taught me about my fellow LGBT Catholics
Michael J. O’Loughlin

I cannot conclude this review without noting the interplay of light and darkness in this text. O’Loughlin has lifted up stories of holiness and of light in the darkness that need to be told, of the church’s hidden mercies and hidden saints of this time. But their light shines more brightly, if painfully, against the darkness of ecclesial failure that characterizes much of the period Hidden Mercies covers. O’Loughlin recognizes the “sadness [that] seems to accompany many of the people I interviewed.” This is not only a story of a holy church but of a church that was missing in action in so many places where the church is not only a source of hope, but also of anger and disappointment. Among the individuals O’Loughlin profiles, it is often a story of leaving religious orders and leaving the Catholic Church. In short, this history is a history of suffering caused not only by the realities of H.I.V./AIDS, but by the wider church’s failure in the face of the plague.

This article also appeared in print, under the headline “Hidden Glories,” in the February 2022, issue. 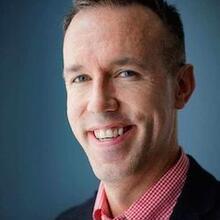 Brian P. Flanagan is an associate professor of theology at Marymount University in Arlington, Va., and the author of Stumbling in Holiness: Sin and Sanctity in the Church (Liturgical Press).

@BrianPFlanagan
Show Comments ()
Join the conversation: Login or create an account
Before you can comment, you need to update your profile to include your first and last name, as required in our comments policy. Then reload this page and you'll be set up for commenting. Update your profile