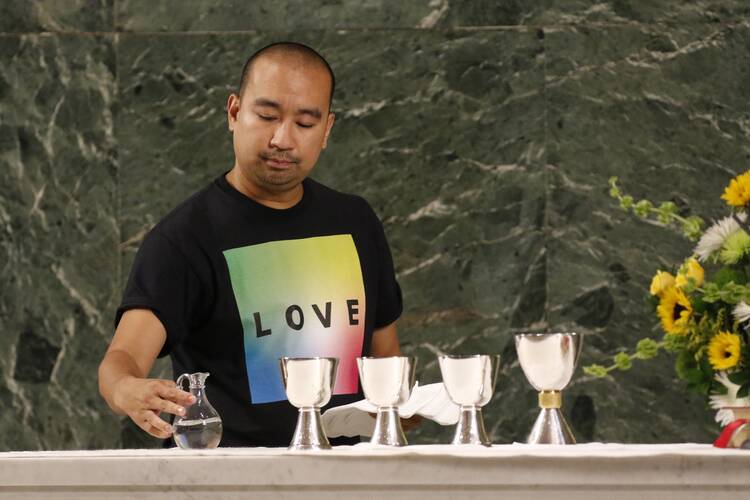 One year ago today, on the annual World AIDS Day, the first episode of “Plague” landed in podcast feeds. Our small team at America had worked seven days a week for several months to produce the series. We combed dozens of hours of interviews and selected the best clips. We identified activists and priests and nuns and ordinary Catholics to speak about their particular experiences. And we wrote and edited and reedited scripts to do right by a story that had so far been vastly underreported. Very early that Sunday morning, listeners began streaming the first episode, which starts with a sober assertion from David Pais, a gay Catholic who talks about his own journey with H.I.V. and AIDS, and explains why learning this history is important for me as a gay Catholic.

Later that morning, NPR aired an interview with me about the series. The word was out. I wasn’t sure what kind of feedback to expect, if any, so I decided the best course of action was to wait a day or so before checking.

It quickly became apparent, however, that “Plague” had struck a chord. My phone buzzed and beeped all day, with friends and acquaintances texting and emailing to say how moving they found David’s story. Some expressed gratitude for making space in the church to tell stories affirming of L.G.B.T. people.

Over the subsequent weeks, we released all six episodes of “Plague.” David’s moving testimony was joined by equally powerful stories about the now-shuttered Saint Vincent’s Hospital, the courageous work of Sister Carol Baltoseiwich, the quiet but bold activism of Father William Hart McNichols and a look at the history of a “gay Catholic church” in San Francisco.

“Plague” received positive coverage in the media, including a nice review in The New York Times, and earlier this fall, “Plague” was honored with a few awards, becoming the first work to be recognized by both the National LGBT Journalists Association and the Catholic Press Association.

But more gratifying to me than all that were the responses from listeners that poured in, beginning last year on World AIDS Day and continuing through today.

“I’m not sure I ever knew how many gay Catholic men and women there are because for so long I felt isolated and alone, caught in between the two.”

Some listeners wrote to me about their own journeys trying to find a place in the church as L.G.B.T. people of faith and said they were consoled by the stories they heard in “Plague.”

“I’m not sure I ever knew how many gay Catholic men and women there are because for so long I felt isolated and alone, caught in between the two,” one listener wrote. “It means a great deal to hear you and others talk about that identity, and it feels incredibly important to witness and honor these stories and the dead. It is a history I did not know I had, and I just need to say thank you for providing that.”

“What a gift,” another listener wrote. “I have so struggled with the ambivalence I feel toward the Catholic Church. The podcast didn’t shift the ambivalence, but instead allowed me to see it as part of the non-binary, three dimensional church I am beginning to find a place in.”

Another listener wrote in to say she found “Plague” helpful because her father is gay and she is too young to know firsthand the vast history of L.G.B.T. people in the church. “I think both ‘liberal’ and ‘conservative’ Catholics, as ridiculous as the labels are, should find this a very helpful tool to better understand something that many of us are too young to know much about,” she wrote.

While there is great complexity inherent in the lives of L.G.B.T. people of faith, the story is more complicated than the false “us vs. them” dichotomy that so many people push.

Other listeners who lived through the horror of the early days of the H.I.V. and AIDS crisis, between 1981 and 1996, when more than 360,000 Americans died from AIDS related complications. They told me that hearing their stories reflected in the lives of people featured in the podcast brought a sense of comfort, even if it was difficult to hear at times.

“It is important for people who escaped living through the AIDS crisis in the 1980s and 1990s have a chance to understand it,” one person wrote.

Another wrote, “I admit I have not finished listening. The flood of emotions the episodes bring makes me stop and turn them off. And at the same time, they open my heart.”

3 lessons the H.I.V./AIDS pandemic can teach us about COVID
Brian Strassburger, S.J.

Over the past year, I’ve continued researching the role Catholics played in responding to the isolation, fear, loneliness and suffering that seemed unrelenting in the early days of the AIDS crisis in the United States. Some of that suffering was caused by church leaders, who often appeared tone deaf in the public square. Other stories—moments of quiet consolation in church-run hospices and hospital rooms—never generated headlines. All these stories will join the ones featured in the podcast in a book that will be published next year. Collecting these stories has underscored three important points.

First, while there is great complexity inherent in the lives of L.G.B.T. people of faith, the story is more complicated than the false “us vs. them” dichotomy that so many people push. And while much of this terrain feels new to L.G.B.T. people who are too young to remember the early days of the AIDS crisis, there is great wisdom to be found in the stories of gay and lesbian Catholics who fought and grieved through the height of the crisis, demanding action from their government and a place in their church.

Learning these stories is imperative if L.G.B.T. people and their families and friends are to have a proper understanding of our church’s history.

Second, learning these stories is imperative if L.G.B.T. people and their families and friends are to have a proper understanding of our church’s history. One of the most meaningful parts of creating “Plague” and then writing the book has been developing intergenerational friendships with people in their 50s, 60s and 70s, people willing to share their life experience with me. It has been a blessing to share those stories and “introduce” these people to countless other L.G.B.T. people of faith who have told me they benefited from that wisdom. Aside from a few rare exceptions, Catholic parishes don’t teach L.G.B.T. history and thus we don’t have a full appreciation of the heroic work that has been undertaken by L.G.B.T. people of faith. This makes the entire church poorer.

Finally, reporting these stories has reminded me that the H.I.V. and AIDS crisis is far from over. For our final episode, we interviewed AIDS activists from South Africa, where nearly 20 percent of the adult population lives with H.I.V. Here in the United States, H.I.V. remains stubbornly high, despite more candid public health campaigns, improved access to preventative drugs and medical care that thankfully means a diagnosis of H.I.V. is no longer a death sentence. Communities of color are particularly hard hit and vestiges of the stigma that was so prevalent in the early days of the pandemic remain. While the Catholic Church remains a leader in global H.I.V. and AIDS care, I’ve been curious why the church seems to have stepped back from this ministry here at home, a topic I’ll continue exploring in the months ahead.

Part of my project aims to show that Catholics responded heroically to H.I.V. and AIDS in the early days, often at great personal and professional risk. What I didn’t realize in setting out to tell these stories was how raw that time remains for so many people, even decades later. In society as a whole, and in the church in particular, there has not been a reckoning with this period in our history. Based on the messages I’ve received from people who lived through this time, this conversation is long overdue.