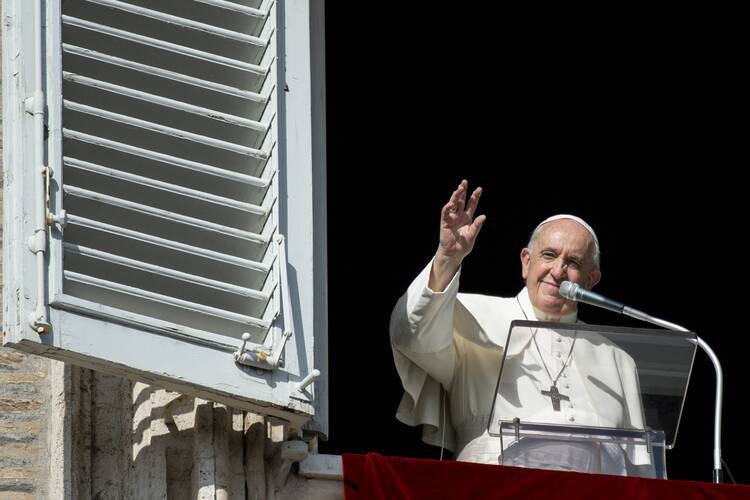 Pope Francis, seen here at the window of his studio overlooking St. Peter's Square, received a copy of “Hidden Mercy: AIDS, Catholics, and the Untold Stories of Compassion in the Face of Fear” this summer. (CNS photo/Vatican Media)

Pope Francis has sent a letter to America’s national correspondent, Michael J. O’Loughlin, thanking him for his research into Catholic responses to the H.I.V./AIDS crisis in the United States during the 1980s and ’90s, which are recounted in his book Hidden Mercy: AIDS, Catholics, and the Untold Stories of Compassion in the Face of Fear. The book will be published on Nov. 30.

Mr. O’Loughlin sent the pope an advance copy of the book over the summer, along with a letter summarizing his work.

“In the letter I explained that I wanted him to know these stories because there were so-called Pope Francis Catholics doing works of mercy, living out in the ‘field hospital,’ as he puts it, decades before there was a Pope Francis,” Mr. O’Loughlin said. “I thought he would appreciate learning about some of these stories.”

“I wanted him to know there were so-called Pope Francis Catholics doing works of mercy, living out in the ‘field hospital,’ decades before there was a Pope Francis.”

The pope replied in a letter dated Aug. 17, which Mr. O’Loughlin made public today.

“Thank you for shining a light on the lives and bearing witness to the many priests, religious sisters and lay people who opted to accompany, support and help their brothers and sisters who were sick from H.I.V. and AIDS at great risk to their profession and reputation,” the pope wrote.

Some of the resistance to Catholics ministering to AIDS patients came from within the church, as Mr. O’Loughlin illustrates in his book, which is based on archival materials and more than 100 interviews with people who witnessed the AIDS crisis firsthand. Some of those interviews are also included in Mr. O’Loughlin’s America podcast, “Plague: Untold Stories of AIDS and the Catholic Church.”

Pope Francis: “Thank you for shining a light on the lives and bearing witness to the many priests, religious sisters and lay people” who accompanied those who were sick from H.I.V. and AIDS.

The church has a really complicated history when it comes to H.I.V. and AIDS,” Mr. O’Loughlin said in an interview on America’s “Inside the Vatican” podcast. “There were people whom I profile in the book who were doing really incredible work, but there were also Catholic leaders who were pretty hostile to the gay community at a time when it was really under siege. So for the pope to acknowledge that difficult legacy, I was surprised by that candidness. But I do think it is part of the Francis papacy to really grapple with our history and not be afraid of it.”

Mr. O’Loughlin’s book explores the importance of knowing history in order to understand one’s identity—a theme Pope Francis also touched on in his apostolic exhortation “Fratelli Tutti.” The pope writes that the idea of “a people” is a “mythic” category (No. 158); in other words, that a group’s identity is rooted in their shared history. For Mr. O’Loughlin, learning the history of Catholics in the AIDS crisis, which largely affected gay men, was an important part of embracing his identity as a gay Catholic.

“I write quite a bit in Hidden Mercy that by not knowing this history, it cuts off the L.G.B.T. Catholic community from knowing that we aren’t alone in the church, that there were these people who came before us who fought for greater inclusion for the L.G.B.T. community,” Mr. O’Loughlin said. He said he hoped that the pope’s acknowledgment of the value of that history might encourage L.G.B.T. Catholics and those who support them to learn more about people who ministered to the L.G.B.T. community during the AIDS crisis and about the challenges they faced within the church.

“At the same time,” Mr. O’Loughlin added, “I don’t want to overstate the impact of [the pope’s letter]. The church, especially in the 1980s, could be quite hostile to the gay community. That has continued through modern times,” he said, citing some L.G.B.T. Catholics’ reactions to the Congregation for the Doctrine of the Faith’s 2021 document on gay marriage that said God “does not and cannot bless sin,” as well as to the firings of L.G.B.T. teachers from Catholic schools.

“A single letter is not going to heal these divisions, and I’m under no illusions that it will, but I hope there is some consolation [for L.G.B.T. Catholics] because something I am encouraged by is the pope recognizing the value of this history,” Mr. O’Loughlin said.

The full text of the letter follows:

I thank you for the letter and the book, which you wrote, Hidden Mercy, that came to me via [redacted]. When I finished reading your letter, I was spontaneously struck by that through which we will one day be judged: “For I was hungry and you gave me food, I was thirsty and you gave me drink, a stranger and you welcomed me, naked and you clothed me, ill and you cared for me, in prison and you visited me” (Mt 25, 35-36).

Thank you for shining a light on the lives and bearing witness to the many priests, religious sisters and lay people who opted to accompany, support and help their brothers and sisters who were sick from H.I.V. and AIDS at great risk to their profession and reputation. Instead of indifference, alienation and even condemnation, these people let themselves be moved by the mercy of the Father and allowed that to become their own life’s work; a discreet mercy, silent and hidden, but still capable of sustaining and restoring the life and history of each one of us.

Again, I thank you and ask that the Father bless you and the Virgin Mary care for you, and please, don’t forget to pray for me.