Stories from 2021 that Pope Francis wished you would have read 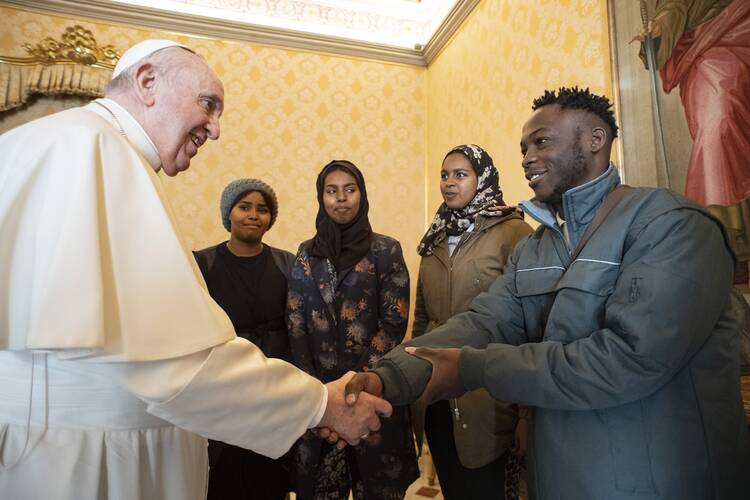 Pope Francis greets asylum-seekers transferred from Cyprus to Italy with his help, during a meeting at the Vatican Dec. 17, 2021. The migrants are being assisted by the Vatican and the Community of Sant'Egidio. (CNS photo/Vatican Media)

In terms of raw page views and reader “engagement,” that is, keeping site visitors on our pages longer and coming back for more (and perhaps converting them into donors and subscribers—what’s holding you back?), few people do more for America than our favorite Jesuit.

Pope Francis has figured in more than 400 articles, columns and reports that America published in 2021, stories that have drawn almost 5.3 million page views.

The pope also scores well with long-time site visitors and flighty page hoppers alike and regularly draws both digital and print subscribers. Folks love reading about Pope Francis and hearing most of the things he has to say, but do they read the stories Pope Francis might wish they would read?

The pope has figured in more than 400 articles, columns and reports that America published in 2021, stories that have drawn almost 5.3 million page views.

Hundreds of thousands of visitors storm the America website when the pope figures in political entanglements like the quadrennial Communion wars, issues unexpected decrees on important ecclesial matters or after an off-the-cuff remark (or three) create global headlines.

But the topics Pope Francis personally returned to a lot in 2021 don’t always get as much attention. But don’t fret. A new year is coming when we can all try to follow the Pope Francis newsfeed a little more faithfully. To catch you up until then, here’s a rundown of some of the issues the pope tried to keep at the forefront of the news in 2021 and articles about them you may have missed.

Human migration: The world continues to experience unprecedented levels of migration as refugees from conflict, poverty and hopelessness head north from the Caribbean and Latin America to the United States or across the Mediterranean into Europe from the Middle East and Africa. The United Nations reports a global tally of more than 281 million international migrants. Most—170 million—are international laborers, but about 90 million are refugees, asylum seekers and displaced people. Spiking populations escaping conflict and political chaos this year came from Afghanistan, Central America and troubled African and Middle Eastern states.

The fate of the world’s refugees and migrants has been a special focus for Pope Francis since the beginning of his papacy. His first trip outside of Rome in 2013 was to Lampedusa, an island then at the heart of the ongoing Mediterranean migrant crisis, where he said Mass for the refugees and migrants lost at sea in their attempts to reach Europe.

The pandemic, Pope Francis said, preached the interconnectedness of the world. “We have come to understand that the great issues must be faced together since in today’s world piecemeal solutions are inadequate,” he said.

Throughout 2021, Pope Francis continued to urge attention to this “humanitarian crisis that concerns everyone,” culminating in his last official visit of the year to Greece and Cyprus. On Dec. 5 he visited a migrant reception facility in Mytilene, on the Greek island of Lesbos.

The pandemic, he said, preached the interconnectedness of the world. “We have come to understand that the great issues must be faced together since in today’s world piecemeal solutions are inadequate,” he said.

We live “in an age of walls and barbed wire,” the pope said. “Yet problems are not resolved and coexistence improved by building walls higher, but by joining forces to care for others according to the concrete possibilities of each and in respect for the law, always giving primacy to the inalienable value of the life of every human being.”

Migration stories you may have missed:

Climate change and care of creation: In May, Pope Francis raised alarms about the urgency of combating climate change, asking Catholics around the world to join the Laudato Si’ Action Platform, “a seven-year journey that will see our communities committed in different ways to becoming totally sustainable, in the spirit of integral ecology.”

“We need a new ecological approach that can transform our way of dwelling in the world, our lifestyles, our relationship with the resources of the Earth and, in general, our way of looking at humanity and of living life,” he said.

He urged the coordinated response of the global community. “Only in this way will we be able to create the future we want: a more inclusive, fraternal, peaceful and sustainable world.”

Pope Francis called for “a model of ‘recovery’” from Covid-19 “capable of generating new, more inclusive and sustainable solutions to support the real economy... and the universal common good.”

In his address to the U.N. conference on climate change, COP26, in Glasgow in November, he asked the world’s advanced economies, and not coincidentally the ones most responsible for carbon burning, to accept their obligation to confront climate change engendered by global warming. “We find ourselves facing an epochal change, a cultural challenge that calls for commitment on the part of all, particularly those countries possessed of greater means,” Pope Francis said. “These countries need to take a leading role in the areas of climate finance, decarbonization in the economic system and in people’s lives, the promotion of a circular economy, providing support to more vulnerable countries working to adapt to the impact of climate change and to respond to the loss and damage it has caused.”

Care of creation stories you may have missed:

Economic and social inequities, especially in distribution of Covid vaccines: Pope Francis has implored the world’s wealthy states to pursue a comprehensive and equitable distribution of the Covid-19 vaccine, in a service to themselves as much as everyone else. Unfortunately, hoarding by wealthy states has, as predicted, allowed Covid-19 variants to emerge that have undermined the efficacy of the world’s existing vaccines. Vaccine hoarding has been only one aspect of his ongoing critique of the maldistribution of the world’s wealth and resources or the rampant waste of them through arms races and what he has memorably called the “throwaway society.”

“Let us remember what the pandemic has shown us, namely that we cannot remain healthy in a world that is sick,” he said in an address to world political and religious leaders attending a meeting on peacemaking organized by the lay Community of Sant’Egidio. “In recent times, many people have contracted the sickness of forgetfulness, forgetfulness of God and of our brothers and sisters,” Pope Francis said. “This has led to unbridled individualism and the desire for self-sufficiency, which has overflowed in insatiable greed. The earth we inhabit bears the scars of this, while the air we breathe is rich in toxins but poor in solidarity. We have thus poured the pollution of our hearts upon creation.”

In a letter in April to the participants in the spring 2021 virtual meeting of the World Bank and the International Monetary Fund, Pope Francis called for “a model of ‘recovery’” from Covid-19 “capable of generating new, more inclusive and sustainable solutions to support the real economy... and the universal common good,” not “a return to an unequal and unsustainable model of economic and social life, where a tiny minority of the world’s population owns half of its wealth.”

Economic and social inequities stories you may have missed: