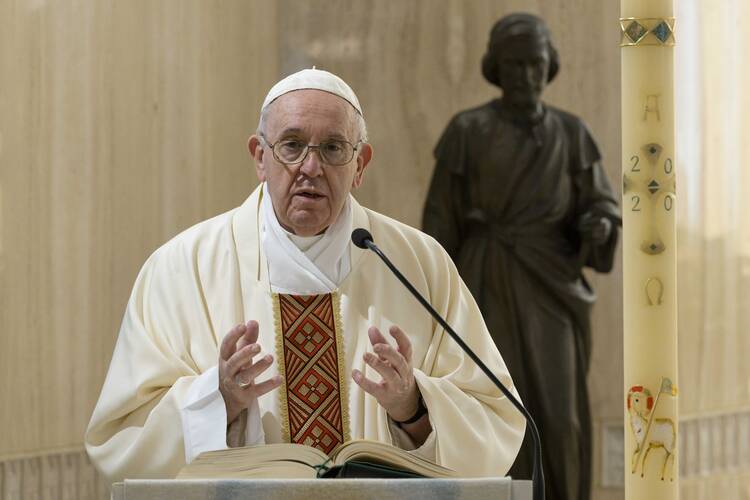 Pope Francis preaches about the dignity of labor and justice for workers during his morning Mass on the feast of St. Joseph the Worker May 1, 2020, in the chapel of his Vatican residence, the Domus Sanctae Marthae. (CNS photo/Vatican Media)

“Tierra, techo, trabajo,” known as the “three T’s,” is loosely translated into English as the “three L’s,” or “land, lodging, labor”—three words invoked each time Pope Francis has addressed the World Meeting of Popular Movements, an annual international gathering of small, community-based organizations working for justice in their societies.

The pope calls his three T’s sacred rights. He has repeated the slogan at each of the annual conferences and, perhaps as he has intended, it has become a battle cry for social justice and minimum living standards around the world. Translated into Latin this time, the three T’s have become the motto of the World Meeting of Popular Movements itself: “Terra, Domus, Labor.”

The pope calls his three T’s—“tierra, techo, trabajo”—sacred rights. The slogan has become a battle cry for social justice and minimum living standards around the world.

The three T’s figure in some of the pope’s most incendiary speeches. He first used the slogan in 2014 (this time with a slightly different English translation):

This meeting of ours responds to a very concrete desire, something that any father and mother would want for their children—a desire for what should be within everyone’s reach, namely land, housing and work. However, nowadays, it is sad to see that land, housing and work are ever more distant for the majority. It is strange, but if I talk about this, some say that the pope is communist. They do not understand that love for the poor is at the center of the Gospel. Land, housing and work, what you struggle for, are sacred rights. To make this claim is nothing unusual; it is the social teaching of the church.

During an address to movement leaders gathered in Bolivia in July 2015, Pope Francis said: “The Bible tells us that God hears the cry of his people, and I wish to join my voice to yours in calling for the ‘three L’s’ for all our brothers and sisters: land, lodging and labor. I said it and I repeat it: These are sacred rights. It is important, it is well worth fighting for them. May the cry of the excluded be heard in Latin America and throughout the world.”

The three T’s may be an original coinage of the pope, but, according to the Argentine moral theologian Emilce Cuda, the new head of the Pontifical Commission for Latin America, it emerges out of a milieu of popular campaigns for social change in Latin America where cries for “tierra” and “trabajo” have echoed through centuries.

Filipe Domingues, a frequent contributor to America on Latin American issues and the new deputy director of the Lay Centre at Foyer Unitas in Rome, views the pope’s rhetorical choice in organizing the three Ts “an attempt to make it clear that these are not ‘leftist’ demands, but they belong to the social teaching of the church.”

“The basic principle behind the three Ts is the universal destination of goods, that comes from Leo XIII and develops over the years,” he said. Mr. Domingues notes that in  “Laborem Exercens,” St. John Paul II considers that concept, which subordinates private property to communal necessity, the “first principle of the whole ethical and social order” (No. 19).

Pope Francis: “There is no worse material poverty than the poverty which does not allow people to earn their bread, which deprives them of the dignity of work.”

The three T’s—or, if you prefer, the three L’s—represent the pope’s shorthand for social and economic rights he considers sacred and non-negotiable. The right to tierra refers to land for the substantial numbers of subsistence farmers, mostly Indigenous, denied the security of land rights through centuries of suppression in the Americas. Techo, literally “roof,” is something that should be over everyone’s head and should be more than the flimsy tin, palm frond or otherwise makeshift roofs Pope Francis has seen covering the homes of the poorest people in Latin America. Techo, or lodging, Ms. Cuda points out, is meant to be broadly interpreted to mean not just decent shelter for all, but clean water, adequate sanitation and health care.

The final T, trabajo, represents a right to engage in work that provides not only a just wage but meaning and financial security to workers and their families. The pope believes the right to trabajo, work, is a preferential option above all other considerations and priorities within a national economy.

“There is no worse material poverty than the poverty which does not allow people to earn their bread, which deprives them of the dignity of work,” Pope Francis said in 2014. “But youth unemployment, informality or underground work, and the lack of labor rights are not inevitable. These are the result of an underlying social choice in favor of an economic system that puts profit above man. If economic profit takes precedence over the individual and over humanity, we find a throwaway culture at work that considers humanity in itself, human beings, as a consumer good, which can be used and then thrown away.”

The three T’s and L’s make an appearance in the pope’s encyclical “Fratelli Tutti,” in the form of a quotation from that first address to the World Meeting of Popular Movements, as a passionate call to solidarity, properly understood—“fighting against the structural causes of poverty and inequality; of the lack of work, land and housing; and of the denial of social and labour rights.” Pope Francis urged solidarity as a force to confront “the destructive effects of the empire of money: forced dislocation, painful emigration, human trafficking, drugs, war, violence and all those realities that many of you suffer and that we are all called upon to transform.”

“Solidarity, understood in its deepest sense,” Pope Francis said, “is a way of making history, and this is what the popular movements are doing.”

“Solidarity, understood in its deepest sense,” Pope Francis said, “is a way of making history, and this is what the popular movements are doing.”

His most recent speech before the Meeting of Popular Movements on Oct. 16 had more than a little Old Testament prophet to it, as Pope Francis declaimed a litany of modern calamities and “in the name of God” demanded a meaningful response from the world’s political and economic elite. In this memorable speech he embraced the notion of a universal basic income and suggested that overworked societies experiment with shorter workweeks not only to create more jobs but to relieve the stress on modern working families.

But “land, lodging and labor”—”tierra, techo y trabajo”—were not neglected in this address either. Pope Francis, “together with the poor of the earth,” called on governments and “politicians of all parties” to “represent their people and to work for the common good.” “I want to ask them for the courage to look at their own people, to look people in the eye, and the courage to know that the good of a people is much more than a consensus between parties (see “Evangelii Gaudium,” No. 218).

“Let them stop listening exclusively to the economic elites, who so often spout superficial ideologies that ignore humanity's real dilemmas,” Pope Francis said. “May they be servants of the people who demand land, work, housing and good living. This aboriginal good living, or buen vivir, is not the same as la dolce vita, or ‘sweet idleness,’ no. This is good human living that puts us in harmony with all humanity, with all creation.”

Later he urged the activists of these peoples’ movements to “reaffirm the commitment we made in Bolivia: to place the economy at the service of the people in order to build a lasting peace based on social justice and on care for our common home.”

“Continue to promote your agenda of land, work and housing,” Francis said. “Continue to dream together. And thank you, thank you very much, thank you for letting me dream with you.”

With reporting from Eduardo Campos Lima.