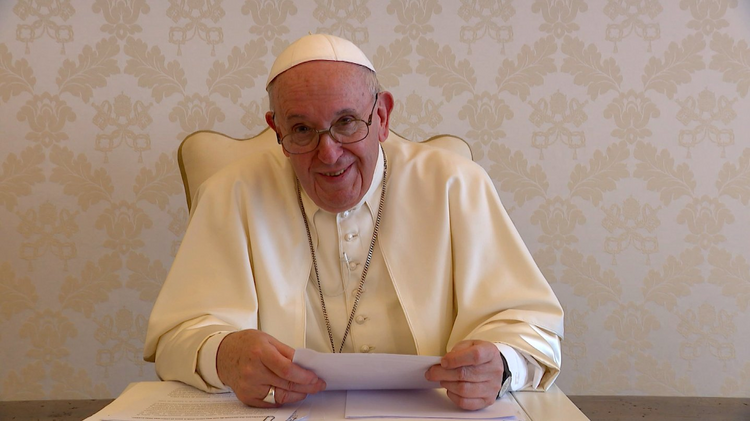 Pope Francis speaks in a video message to participants of the Argentine Association of Christian Business Executives' annual meeting in this still from a video released by the Vatican June 30, 2021. The pope urged business leaders to find creative ways of creating employment and to "invest in the common good, not (by) hiding money in tax havens." (CNS photo/Vatican Media)

Pope Francis sent a video message on Wednesday to a meeting of Argentine Christian business leaders urging them to “return to the economy of what is tangible, not to lose sight of the real.”

“What is real is production, the work of all...” the pope said in Spanish. “The real. In a society where there is a very large margin of poverty, you have to ask yourself how the economy is doing, whether it is fair, whether it is social or whether it is simply pursuing personal interests.”

The video message echoed the writings of female economists like Mariana Mazzucato and Kate Raworth, both of whom Pope Francis cited in his most recent book, Let Us Dream, as having influenced “the Vatican’s thinking about a post-Covid future.”

Pope Francis sent a video message on Wednesday to a meeting of Argentine Christian business leaders urging them to “return to the economy of what is tangible, not to lose sight of the real.”

The pope wrote that Dr. Mazzucato’s book The Value of Everything “provoked a lot of reflection in me.” The book’s central argument is that, as Dr. Mazzucato writes, “the way the word ‘value’ is used in modern economics has made it easier for value-extracting activities to masquerade as value-creating activities.” Value-creating activities, she writes, can be identified by the way that human, material and intangible (e.g., intellectual) resources combine to create new goods and services, whereas value-extracting activities are those that are “focused on moving around existing resources and outputs, and [gain] disproportionately from the ensuing trade.” Ultimately, Dr. Mazzucato does not argue for one theory of value but calls for a rigorous debate on what value is.

Dr. Raworth, an Oxford University scholar who spent three years working with micro-entrepreneurs in Zanzibar and addressed the Vatican-sponsored “Economy of Francesco” conference last year, is known for developing the theory of “doughnut economics” that the pope also referenced in his book. As described on the Doughnut Economics Action Lab website: “The Doughnut consists of two concentric rings: a social foundation, to ensure that no one is left falling short on life’s essentials, and an ecological ceiling, to ensure that humanity does not collectively overshoot the planetary boundaries that protect Earth’s life-supporting systems. Between these two sets of boundaries lies a doughnut-shaped space that is both ecologically safe and socially just: a space in which humanity can thrive.”

Pope Francis praised both Dr. Raworth’s and Dr. Mazzucato’s incorporation of environmental concerns and wealth inequalities in their economic thinking, writing, “I see thinking that is not ideological, which moves beyond the polarization of free-market capitalism and state socialism, and which has at its heart a concern that all of humanity have access to land, lodging, and labor. All of these speak to priorities of the Gospel and the principles of the Church’s social doctrine.”

“Investment means giving life, creating; it is creative,” the pope said. “Knowing how to invest, not to hide. One hides when one’s conscience is not clear.”

Pope Francis, echoing these ideas in his message to the Christian Association of Business Leaders today, spoke against the “financialization” of businesses that Dr. Mazzucato describes, using the image of “the chain of St. Anthony,” a name for Latin American chain emails that promise riches for those who forward them: “Let us be realistic, the economy lately, in the last decades, has generated finances, and finances carry the risk of ending up like the chain of Saint Anthony: We believe there is a lot and in the end we find there is nothing.”

To counter this financialization and the wealth disparity that results from it, the pope said, business leaders should shift their focus to production, creating jobs and “investing in the common good, not hiding money in tax havens.”

“Investment means giving life, creating; it is creative,” the pope said. “Knowing how to invest, not to hide. One hides when one’s conscience is not clear or when one is angry. We all know what is said in the countryside when the cow does not give milk: ‘What happened to the cow, why is she so angry that she is “hiding” the milk?’ When we hide it is because something is going wrong. Clarity, transparency and production. Invest. And gradually build social trust.”

The pope also expressed his joy at having approved the next step of the canonization cause of the group’s founder, Servant of God Enrique Shaw. Shaw was a businessman who was arrested as part of the Juan Perón administration’s campaign of anti-Catholic persecution. He was known for his care for his company’s workers. His canonization cause was opened by the future Pope Francis, then-Archbishop Jorge Bergoglio, in 2001, and advanced to the Roman phase under Pope Francis in 2015.