Pope Francis warns us: Covid-19 is not the only global crisis we’re facing right now 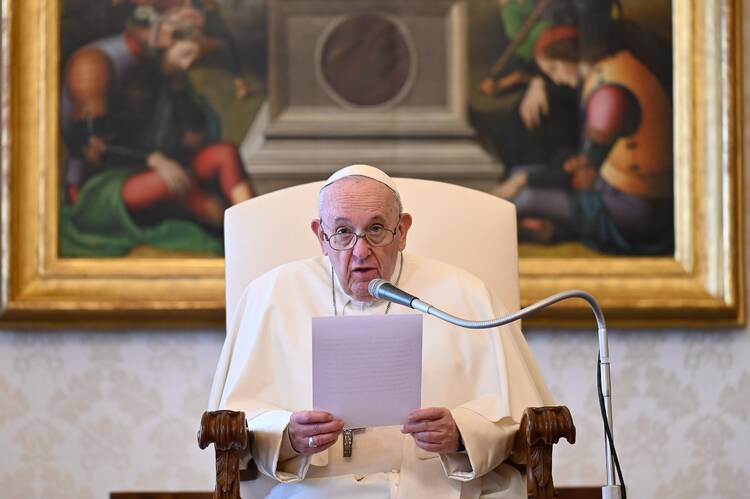 Pope Francis leads his general audience in the library of the Apostolic Palace at the Vatican April 7, 2021. (CNS photo/Vatican Media)

Pope Francis has highlighted a global crisis that has been obscured by the inescapable Covid-19 catastrophe but has the potential to lead to comparable human suffering. In a letter on April 8 to the participants in the spring 2021 virtual meeting of the World Bank and the International Monetary Fund, Pope Francis called for “a model of ‘recovery’” from Covid-19 “capable of generating new, more inclusive and sustainable solutions to support the real economy... and the universal common good,” not “a return to an unequal and unsustainable model of economic and social life, where a tiny minority of the world’s population owns half of its wealth.”

Among the steps to that rethinking of recovery, Pope Francis urged world leaders to support a significant reduction in the debt burden of the world’s poorest nations. “Relieving the burden of debt of so many countries and communities today is a profoundly human gesture that can help people to develop, to have access to vaccines, health, education and jobs,” he said.

Zambia is first African country to default on debt during Covid. It may not be the last.
Tawanda Karombo

Eric LeCompte could not have asked for a more timely and effective celebrity endorsement of the work of the Jubilee USA Network to confront—yet again—a bubbling-under debt crisis that threatens a staggering impact on the world’s most vulnerable people. “We’re approaching the greatest wave of debt crises and debt restructurings the world has ever seen,” he said in an interview with America. “Fifty-six percent of all countries in the world are either [already in] debt crisis or on the verge of debt crisis,” he said, “so it’s an incredibly significant issue, and it’s become more significant because of the coronavirus pandemic.” Nations in Africa have been particularly hard hit, with 14 countries vulnerable to default and nine others in default or on the verge of default.

The Group of 20, a policy-making forum of the world’s largest 20 economies, and the I.M.F. have created an emergency process to respond to the crisis for the 73 “very poorest countries in the world”—Zambia, Chad and Ethiopia have already appealed for relief under this emergency debt relief process—but that emergency response still leaves out a substantial number of nations facing overwhelming debt, Mr. LeCompte said.

Talk of debt crises may have a familiar ring to people of a particular age who have already witnessed how waves of defaults and near defaults in Latin America and Africa engendered economic and humanitarian chaos. Indeed, since the 1970s the global economy has experienced a number of debt crises and ad hoc responses because of poorly conceived loans and questionable financial instruments, currency or commodity market collapses, or outright institutional and government corruption that germinates around international lending. Responding to Pope John Paul II’s call for a debt jubilee for developing economies in 1999, Jubilee USA and other advocates for restructuring or forgiving such debt emerged to press humanitarian aid and systemic reforms that promised to put an end to cycles of dubious lending followed by humanitarian scarcity.

Then as now, the stakes could not be higher. “Debt means death” was Mr. LeCompte’s blunt summary of the implications of the crises, which have forced low-income states to disburse “more in debt payments than…all of their health care, education and social services combined.”

Many of the same inequities and power imbalances contributed to this latest debt crisis. Unable to depend on outright grants from the affluent world to finance investments in infrastructure or human capital, poor nations turn to bond sales and loans.

Accepting higher levels of debt proved irresistible to many governments because of the historically low interest rates that followed the 2008-09 global economic collapse and the creation of new borrowing instruments, among them African Eurobonds that were snapped up by investors in the affluent world seeking the highest returns for warehousing cash. Payments on those novel debts are coming due at the absolute worst possible time, Mr. LeCompte pointed out, as Covid-19 shuts down economies around the world and poor states stagger under the additional health care costs the pandemic is creating.

It is a painfully familiar cycle, Mr. LeCompte allows. “We have risky behavior. We have irresponsible lending and borrowing taking place,” he said. “And then the pandemic strikes. It’s a global economic shock, the worst crisis that we have faced since the Great Depression, and developing countries don’t have the revenues or the tools to be able to face the crisis.”

A report released on April 1, ahead of the I.M.F./W.B. meeting, from the United Nations Development Program urged “bold new mechanisms” to help low- and middle-income countries address “crippling debt, sharply worsened by the COVID-19 pandemic.” The report warns that inaction now threatens “vital investment to tackle poverty and climate change for years to come.”

The report, “Sovereign Debt Vulnerabilities in Developing Economies,” classified 72 low- and middle-income economies as “vulnerable” and 19 of them “severely vulnerable.”

The study estimates that about $600 billion of external public debt service payments are at risk from 2021 through 2025. But the most significant threat, the report finds, does not derive from the potential for a cascade of debt defaults but the possibility that a prolonged debt crisis could leave countries with crushing debt burdens for years to come, “preventing governments from making critical investments to benefit their own people and address the climate crisis.”

“This year, close to $1.1 trillion is due in debt service payments,” U.N.D.P. administrator Achim Steiner told reporters. “Just 2.5 percent of that amount would be enough to vaccinate two billion people.”

Mr. LeCompte argues that mechanisms for avoiding the next crisis have to be integrated into the current emergency humanitarian and fiscal response. These mechanisms include a permanent debt reduction process, new policies that guarantee transparency in lending and borrowing, and better strategies to curb tax evasion and corruption—not coincidentally, all policies promoted by Pope Francis in his address to the United Nations in 2015 and in his recent letter.

The debt crisis threatens a staggering impact on the world’s most vulnerable people. “We’re approaching the greatest wave of debt crises and debt restructurings the world has ever seen.”

“Markets,” the pope wrote, “particularly the financial ones—do not govern themselves. Markets need to be underpinned by laws and regulations that ensure they work for the common good, guaranteeing that finance—rather than being merely speculative or financing itself—works for the societal goals so much needed in the context of the present global healthcare emergency.”

If that kind of comprehensive reassessment of global borrowing and lending practices is secured now, said Mr. LeCompte, “we actually have the ability, not only to prevent the next crisis, but to deal with the great challenges of inequality and extreme poverty.”