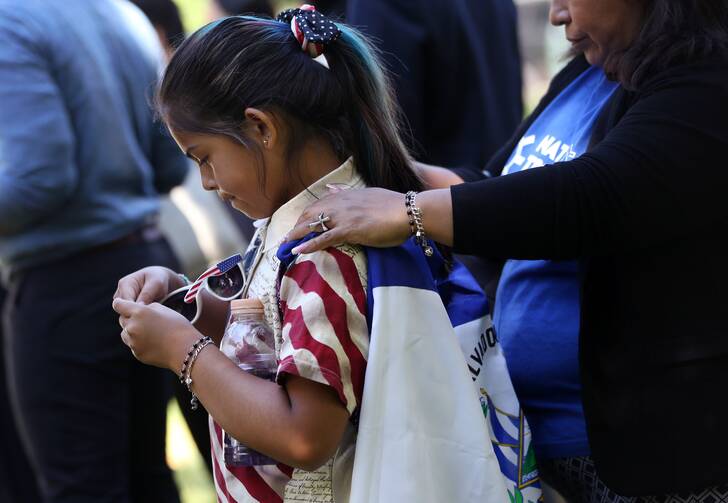 Marilyn Miranda, 9, draped in a Salvadoran flag, attends an immigration rally with her mother outside the U.S. Capitol in Washington June 4, 2019. (CNS photo/Leah Millis, Reuters)

For years, the U.S. policy on the southern border has focused on security above all else. Under former President Trump, for example, the United States implemented a zero-tolerance policy that led to thousands of children being separated from their families. The administration also put into force the Migrant Protections Protocol, which empowered immigration officials to return thousands of asylum seekers to Mexico to await court decisions in the immigration court system. The administration touted extending the existing border wall.

But Catholic leaders in border communities have high hopes things will change under the Biden administration. Immigration advocates, including four bishops, sent a letter to President Biden on Jan. 28, urging his administration to restore asylum, offer protection over deterrence at the border and overhaul the current immigration policy.

“We know that the critical work of rebuilding must also begin at the border, where our national bonds of solidarity and the rule of law have both been distorted and undermined,” they wrote. “Here we have seen how fear and anxiety can be quickened into deadly hatred of neighbor, into weapons of division and racism and into wall-building between family and friends.”

“We know that the critical work of rebuilding must also begin at the border, where our national bonds of solidarity and the rule of law have both been distorted and undermined.”

The letter, signed by Archbishop John C. Wester of Santa Fe, N.M., Bishop Robert W. McElroy of San Diego, Calif., Bishop Mark J. Seitz of El Paso, Tex., and Bishop Edward J. Weisenburger of Tucson, Ariz., extended “a hand of partnership” and invited Mr. Biden and Vice President Kamala Harris to “join us as we recommit ourselves to solidarity, justice and relentless love in the face of all that divides.”

“Our hearts are broken and we are shaken by the violence of the past month in our nation’s capital,” they wrote in the letter. “A divisive politics has long proceeded unchecked, unmoored from love of neighbor, and enabled by the silence of those who had responsibility to speak.”

“In our work on the border, we have seen the same steady drying up of mutual concern, the disappearance of compassion and the troubling growth of the spirit of indifference for decades.”

“In our work on the border, we have seen the same steady drying up of mutual concern, the disappearance of compassion and the troubling growth of the spirit of indifference for decades,” they wrote in the letter to Mr. Biden. “We are inspired by your leadership in denouncing white supremacy and extremism, and in underscoring the need for our nation to prioritize the common good. Your bold proposals and action on immigration reform give us hope.”

Along with the letter, advocates sent a framework for action and reform. Both the letter and the suggested actions make an appeal to Mr. Biden’s Catholic faith. The president has a photograph of himself and Pope Francis in the Oval Office while the framework for reform opens with a quote from the pope’s new book, Let Us Dream:

No one should be obliged to flee their country. But the wrong is doubled when the migrant is forced into the hands of people traffickers in order to cross borders; and tripled when they reach the land they thought would give them a better future, only to find themselves despised, exploited, abandoned, or enslaved. We need to welcome, promote, protect, and integrate those who come in search of better lives for themselves and their families.

“We’re appealing to someone who has expressed a commitment to bold reform, who has expressed contrition [for previous policy] and who is a believer,” Mr. Corbett told America. “We’ve already seen a change away from the demonizing of immigrants. That’s really important.”

Mr. Biden has also put forward a substantial proposal for immigration reform, which does not emphasize border security, and has put a moratorium on deportations, Mr. Corbett said. “We think this is a kairos moment to transform the system,” he said. “We see immigration as a sign of the times. The Spirit is asking us to rise to the challenge of solidarity.”

The suggested framework calls for the protection of asylum seekers and the humane treatment of individuals returned to their home countries.

The suggested framework calls for the protection of asylum seekers, the end of the Migrant Protections Protocol and ensuring the humane treatment of individuals returned to their home countries. Further, advocates ask that the Biden administration “support reintegration programs in countries of origin to provide social services, employment relocation and protection to returnees.”

“As faith leaders, we’re all very attentive to the needs of the marginalized and recognize the necessity to make immediate changes to asylum,” Mr. Corbett said. “But that’s not going to be enough in the region—in the United States, Mexico and Central America—we need a completely different approach. We need transformative change.”

The advocates asked for border policies that stress protection over deterrence. That would include ending the detention of asylum seekers and migrant families “who represent no danger to our communities.” They are also asking Mr. Biden to address “the culture of abuse in border enforcement” and to reinstate the Central American Minors Program.

Immigration reform should focus on increasing pathways for legal immigration and citizenship, according to the advocates. They also called for Mr. Biden to “take bold leadership to respond to the global protection gap with regard to people displaced by the climate crisis.” And Mr. Biden, they said, should address the root causes of migration by supporting safety, democracy and sustainability in Central America.

The advocates acknowledge that change will take time and will require “deep listening to those who have been affected, and commitment to shared efforts to construct a common future.”

The advocates acknowledge that change will take time and will require “deep listening to those who have been affected, and commitment to shared efforts to construct a common future.”

“Humble encounters with the poor and attentiveness to their needs and aspirations converts hearts and offers vision capable of motivating a new type of politics required by the present moment,” according to the letter writers. “This is a politics concerned with the building up of a people in right relationship with one another and with the poor and the environment, a politics of ongoing commitment to shared values and mutual love.”

The Sisters of Mercy of the Americas: Border Ministers and Immigrant Advocates, the Columban Center for Advocacy and Outreach and the Jesuit Refugee Service/USA also backed the letter and framework for reform.