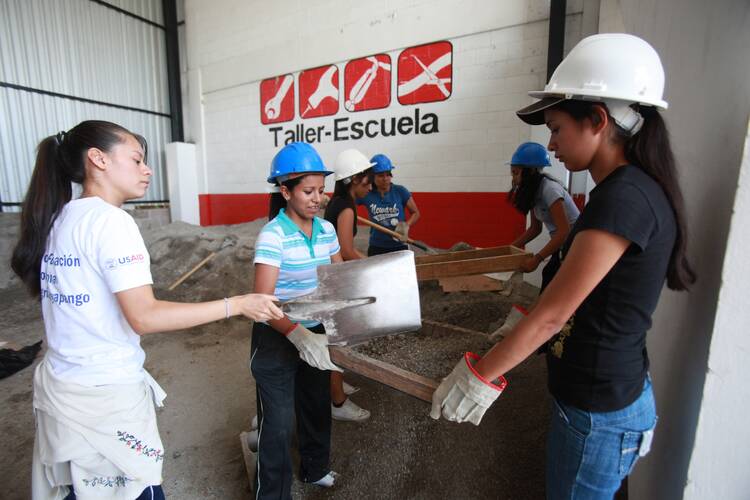 If you own a car in El Salvador, there is a good chance you pay gangs a monthly fee to keep it safe. It is just a fact of life, according to Alberto Velázquez Trujillo, director of Faith in Action in Central America.

You also cannot drink the municipal tap water, so you will have to divert a good percentage of your income to bottled water, he said. Then again, you might not have a job, so you will not be able to afford purified water.

The Biden administration has vowed to invest $4 billion in Central America to address issues like these and other factors that drive immigration to the United States. They include economic insecurity, violence, environmental crises and government corruption.

On his first day in office, Mr. Biden introduced the U.S. Citizenship Act of 2021, an immigration reform bill that offers aid to Central America. The bill proposes an approach that focuses on private investment in Central America, supporting programs to improve security and the rule of law and to confront corruption.

The Biden administration has vowed to invest $4 billion in Central America to address factors that drive immigration to the United States—economic insecurity, violence, environmental crises and government corruption.

The hope is that aid and investments from the United States will lead to improvements in everyday life for Central Americans, encouraging people of the region to remain in their home countries. It is a proactive strategy that in the end intends to alleviate the press of migrating people from these Northern Triangle nations at the U.S.-Mexico border.

President-elect Biden will find plenty of advocates and humanitarians on both sides of the border ready to help.

“Our goal has been and will continue to be to work with Congress to address the root causes of migration,” said David Cronin, a senior policy and legislative specialist with Catholic Relief Services. He noted that over the last few years under President Donald Trump, the State Department has cut hundreds of millions in U.S. aid to Central American countries. Despite the outgoing Trump administration’s position, Mr. Cronin said that over the last two years he has found consistent bipartisan support for aid to Central America in Congress.

But reversing the impact of the Trump policy on Central America will take some time. “Poverty alleviation does not happen overnight,” Mr. Cronin told America. “To attain sustainable development requires a long-term commitment of time and resources. We have not seen that [from the United States] in Central America.”

Conditions in Central America corroborate that assessment. El Salvador and Honduras have two of the highest homicide rates in the world, and more than 40 percent of children under five suffer malnutrition in Guatemala.

In recent months, two hurricanes within days of each other landed on already impoverished nations in Central America, leading to the displacement of hundreds of thousands, he said. “It becomes more difficult to maintain hope when you don’t have a home,” Mr. Cronin said. Formal and informal camps have been established for the people in the region dislocated by the natural disasters. Now Covid-19 is complicating relief efforts.

Biden’s hope is that aid and investments from the United States will lead to improvements in everyday life for Central Americans, encouraging people of the region to remain in their home countries.

Mr. Cronin acknowledged that Mr. Biden will have to contend with the realities of the pandemic in the United States, but he said aid to countries in need must remain a priority.

“The realities domestically are challenging to take in, but when it comes to international assistance, we can and should do both,” he said. “It’s in the U.S.’s interest. And it’s part of the moral foundation of who we are—to be good neighbors and hold up human dignity. Global problems require global responses.”

Dylan Corbett, the executive director of Hope Border Institute, has been working with a coalition of grassroots organizations and faith leaders to address the root causes of immigration to the United States. U.S. foreign policy has led to the current conditions, he said, so the United States should take responsibility.

On Dec. 10, the coalition sent a letter to Mr. Biden, signed by more than 300 faith-based and civic groups and 20 Catholic and Episcopal bishops, including Cardinal Álvaro Leonel Ramazzini Imeri of Huehuetenango, Guatemala, and Bishop Mark Seitz of El Paso, Tex.

“Families can only bear so much suffering,” Cardinal Álvaro Ramazzini said in a press statement. “The devastation caused by Hurricanes Eta and Iota is a direct result of climate change and failure to invest in basic services and sustainable development in poor and indigenous communities.”

“If Biden wants to help Central America, he needs more discernment about where the money is spent. If he just gives money to the governments, things will remain the same.”

He added, “It is immoral and shortsighted to punish people for trying to survive rather than sincerely addressing the underlying causes that lead them to leave the homes and communities they love.”

Bishop Seitz said the time had come to take another approach in U.S. foreign policy. “In every migrant seeking refuge at the U.S.-Mexico border, God is calling us to hear the cry of the poor and the cry of the earth in the Americas,” he said in a statement in December. “Jesus calls us to solidarity with the young people who cannot find work, the families terrorized by crime, the indigenous communities forced from their lands and the human rights defenders working to build a more just society in Central America.”

Mr. Corbett and other leaders from the coalition met with the Biden transition team in December. “It was a beautiful moment to see leaders from each region all speak and give testimony about the need to make changes,” he told America. “We are excited to work with the new administration and hope this continues.”

Still, Mr. Corbett said church leaders and migrant advocates need to remain vigilant. “Biden has made positive overtures, but he comes from an Obama administration that focused on [immigration-law] enforcement,” he said. “We need a fundamental overhaul of our foreign policy. We have to elevate addressing the root causes over criminalization, which has been deadly in the past.”

In El Salvador, Mr. Velázquez Trujillo was more reserved. “I don’t expect much change,” he told America. “The time of Obama was not really different [from Trump]. I’ll start to have hope when I begin to see change.”

Cardinal Álvaro Ramazzini: “Families can only bear so much suffering. The devastation caused by Hurricanes Eta and Iota is a direct result of climate change and failure to invest in basic services and sustainable development.”

Elected officials in the United States need to hold Central American governments accountable for the funds they are given, Mr. Velázquez Trujillo said. “If Biden wants to help Central America, he needs more discernment about where the money is spent. If he just gives money to the governments [as administrations done in the past], things will remain the same.”

In the meantime, Mr. Velázquez Trujillo is taking steps to enact change locally. His group organizes from San Francisco de Asís Church in San Salvador to provide water for their neighborhood. According to a recent study, El Salvador, the most densely populated country in Central America, will become “unlivable” in 80 years if it does not start to do more now to protect its fresh water resources. Mr. Velázquez Trujillo said 90 percent of the surface water in El Salvador is contaminated with sewage and industrial or agricultural waste.

The current minimum wage in El Salvador, at about $10 a day, is another issue that needs to be addressed, and Mr. Velázquez Trujillo described both the health care system and education as deficient.

Mr. Velázquez Trujillo and his group have been developing individuals he hopes will be future government leaders. He believes the major political parties are corrupt and do not represent the will of the people.

“We’re looking for [independent] candidates, that’s the idea,” he said. “That’s the only way we will bring about change.”

Given entrenched systems of government and political corruption, upsetting the current power structure could put Mr. Velázquez Trujillo and his organization in danger. It is possible legislators will attempt to block independent candidates with a new law, he said.

“We’re afraid, but I think that when the people speak, it is very difficult to act against them,” he said. “We always live with fear, but we cannot let ourselves be defeated by it.”

The people in the United States, Mr. Velázquez Trujillo said, need to hold their government leaders accountable too. As best, he finds U.S. hemispheric policy hypocritical. The current attitude of relative indifference to the region’s socioeconomic and political woes will lead to more caravans going north. It means more cheap labor for the United States, he said, and just more poverty and violence in Central America.