Why the COP26 climate conference matters for Catholics 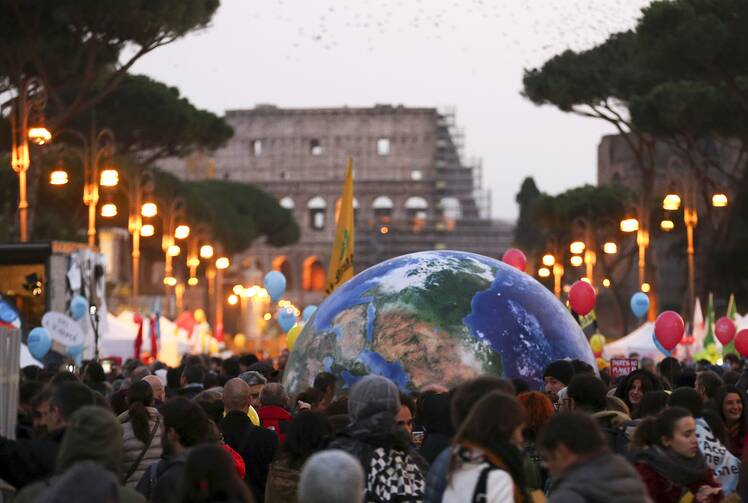 Protesters carry a globe-shaped balloon in front of Rome's Colosseum during a rally before the start of COP21 in Paris, 2015. (CNS photo/Alessandro Bianchi, Reuters)

Editor’s note: Peter Knox, S.J., of South Africa joins Sebastian Gomes, an executive editor at America Media, on “Behind the Story” for an honest conversation on climate change, the upcoming COP26 meeting and what Catholics can do to respond to Pope Francis’ calls for ecological conversion.

You can watch the full episode and read an excerpt of their conversation below. The transcript has been edited for length and clarity.

Sebastian Gomes: Let’s just start with the very basics. We are going into COP26 in Glasgow. What are these COP meetings? Who is there? What is the point of them?

Peter Knox, S.J.: COP is an acronym for Conference of the Parties, and the parties are those countries—mostly countries but there’s also the European Union—which have signed up to various conventions of the United Nations. Every year the parties come and discuss more about their commitments and how their commitments are going as far as avoiding climate change.

SG: Is there a goal or a target that we are looking to come out of COP26?

PK: Firstly, we are trying to keep to the Paris [climate] agreement. [COP’s President Alok Sharma] wants to get the parties committed to producing $100 billion per year for climate financing, but that hasn’t been really forthcoming. We heard last month that only $80 billion was produced last year (the 2020 financial year). The Paris agreement was a broad agreement, and everybody left feeling very good, but in order to implement the Paris agreement there have to be rules put in place, like annual reporting and doing a worldwide audit of global greenhouse gases.

SG: We are starting to see the impacts of climate change around the world. Is there an urgency around this [meeting] in Glasgow that might be unique in some way?

PK: Yes. I think what has generated a certain amount of urgency was the publication last month of the Intergovernmental Panel on Climate Change report. To quote from that report: “Climate change is already affecting every inhabited region across the globe with human influence, contributing to many observed changes in weather and climate extremes. Climate change is widespread, it’s rapid and it’s intensifying.” António Guterres, the secretary general of the United Nations, said that this report is “a code red for humanity.” The alarm bells are deafening. The evidence is irrefutable. Greenhouse gases from human causes are causing climate change.

Glasgow cannot just be another big international meeting where people come and talk. There’s something that they have to do and have to do very quickly. And I think that doesn’t just apply to governments; I think it applies to us as ordinary citizens of our respective countries as well. Climate change is not something in the distant future. It is not something that our children are going to have to deal with. It is happening now. It is real. And it is accelerating.

Climate change is not something in the distant future. It is happening now. It is real. And it is accelerating.

SG: You mentioned that everybody has to participate in this. A person who has done a lot is Pope Francis. He issued his groundbreaking encyclical in 2015, called “Laudato Si’,” on care for our common home, which was right before the Paris climate summit. How do you think Pope Francis sees his role today on the global stage as a religious leader in trying to kind of awaken our consciousness to this crisis?

SG: The world was watching and hoping that Pope Francis would actually go to Glasgow to address the conference. I know it was his desire to do so. But we’ve learned recently that he will no longer be attending. Do you have thoughts on why that is?

PK: When Pope Francis spoke with the religious leaders earlier this month, he said that he will make every effort to go to Glasgow depending on his health.

SG: Given the state of the crisis that we are in, it seems that all political parties in the last 20 to 30 years are implicated in this, are not rising to the challenge that we face collectively. Can you talk to me about the importance of having that intergenerational perspective and how that connects us in ways that we really need more of today and as we face this crisis?

PK: I mean, it is a matter of politics. But I think lots of young people, Greta Thunberg, for example, are nonpartisan. They’re not tied to party politics. They’re just young people saying we are concerned about our future—and it’s across the political spectrum. They’re really, really worried about it. When they look at the forest fires, when they look at major climate events, it is not about party politics. And we have to get beyond the notion that the parties are going to solve the issues. We have to come together as countries with commitment. And that will require sacrifices for all of us.

We have to come together as countries with commitment. And that will require sacrifices for all of us.

SG: What do you hope will come out of this conference in Glasgow?

PK: I hope that there will be great generosity. I hope that many of the countries who are negotiating there will really have read that I.P.C.C. report and have taken it seriously. I hope that the Paris Accords will be respected and people won’t be withdrawing. Let us accelerate the pace that Paris set for us, so that we will reach climate neutrality by the end of the century.

SG: What advice do you have for wading through despair that can beset us when we are looking at the crisis?

PK: Despair and anxiety are what Ignatius would call desolation. We are not in a good space. We are not turning toward God. We are not filled with hope—and God is a God of hope. We have to continue praying. We continue hoping for the best. I think we have to be proactive. I think each of us has to do our little best rather than give up.

I think each of us has to do our little best rather than give up.

And God wants us to save ourselves from the crisis. God is not going to do absolutely everything for us. We have to actually get out there and involve ourselves with God’s plan of salvation.