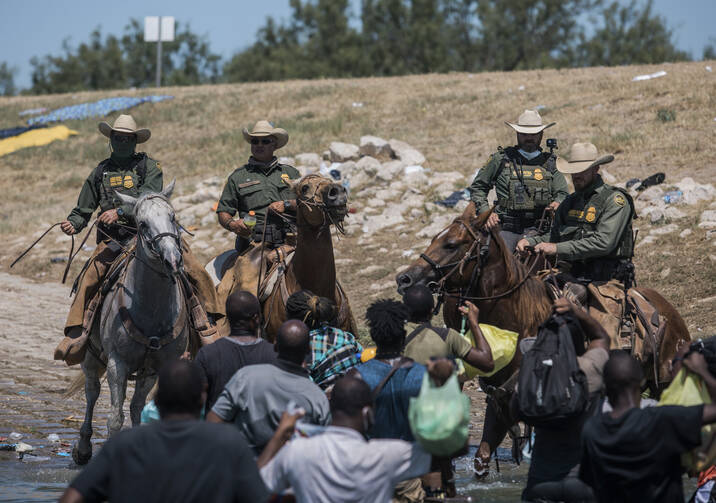 It has not been a good week for U.S. immigration officials after conditions in Del Rio, Tex., and the mistreatment of scores of Haitian asylum seekers encamped there were caught on camera. Many of these likely asylum seekers had traveled from as far away as Chile and Brazil to reach the U.S.-Mexico border, having first emigrated from Haiti into South America after a devastating earthquake in 2010.

That made reports of their rapid deportation to Haiti, a nation some had not seen in more than a decade, seem especially cruel. Worse, Haiti’s precarious state—after another earthquake, a tropical storm and a presidential assassination in just the last three months alone—makes it a poor candidate for safe, legal repatriation.

But what provoked the most outrage were images of Border Patrol agents on horseback attempting to physically block the asylum seekers or frighten them back into Mexico by swinging horse reins (many observers took them for whips). Is this the “safe, orderly and humane” immigration system that the Biden White House has promised?

“Pretty much every tool that you might need to deal with a situation like this has been very badly depleted.”

On Sept. 20, the Department of Homeland Security responded to the uproar with a statement calling those images “extremely troubling” and promising a full investigation that would “define the appropriate disciplinary actions to be taken.” Those reports make it sound like D.H.S. has already decided to let the Border Patrol cowboys take the fall for the bad press, but nobody should be surprised by this latest bit of ugliness at the border. Turning desperate people away from the border will always be ugly—because the official policy behind it is ugly.

U.S. immigration policy has not changed in decades beyond some tweaks around the edges that seem only to have enhanced its cruelty and ineffectiveness. It relies on multiple strategies to keep migrants from reaching the United States, ad hoc bureaucratic and physical barriers at the border and capricious, intrusive enforcement in working communities around the country. If politicians were not afraid of appearing soft on immigration—or worse pandering to neo-nativists’ obsession with “great replacement” conspiracies—saner and more humane scenes could be the rule, not the exception at the U.S.-Mexico border.

Not a border crisis

America’s unspoken immigration policy has been to make the process as onerous as possible and to make conditions at the border as miserable as the world’s wealthiest nation can get away with. That policy is of course immoral and cruel; what is worse is that it doesn’t work.

The Western Hemisphere’s marginalized and vulnerable people seek not only to escape poverty and lack of opportunity, but the social disorder, corruption and state-sponsored violence which menace their daily lives. That desire is predictable and comprehensible. It won’t be stopped by bigger walls or beaten off with horse reins.

Donald Kerwin is the executive director of the Center for Migration Studies of New York. What Americans need to understand, he says, is that what they are witnessing in Texas is not a “border crisis” or a “refugee crisis” at all. “This is a different kind of crisis entirely; it’s a crisis of displacement…. It’s about people driven by absolutely impossible circumstances.”

U.S. immigration policy has not changed in decades beyond some tweaks around the edges that seem only to have enhanced its cruelty and ineffectiveness.

Those impossible circumstances include a global pandemic that has disrupted economies throughout South America but has hit especially hard nations where Haitians, Venezuelans, Nicaraguans and other national groups had found respite from political and economic conditions in their home countries. This is clearly not a crisis that can be resolved by more aggressive enforcement at the U.S. border.

The United States is at this time uniquely unprepared to respond, according to Mr. Kerwin. President Joseph Biden Jr. inherited “a really extraordinarily bad situation,” he says, because of Trump administration policies that badly degraded the capabilities of the nation’s immigration and asylum systems.

“Pretty much every tool that you might need to deal with a situation like this has been very badly depleted in terms of infrastructure,” Mr. Kerwin says. “To have a robust refugee and asylum systems that were well staffed and funded would be a huge help at this point, but that doesn’t exist.” Now, under duress, the Biden administration will have to focus its “build back better” mantra on immigration and asylum, he says.

Over decades an enforcement-first mentality has led to imbalances that contribute to the calamity at the border. Since the creation of the Department of Homeland Security in 2003, the federal government has spent an estimated $333 billion on enforcement. But economic and social development aid to Central American states, where most current migration originates, has typically represented the barest fraction of that spending.

Though various interventions over decades have contributed to instability, violence and poverty in the region, the United States has not exactly been generous in non-military assistance. In 2016 the United States delivered just $131 million in aid to Guatemala, $98 million to Honduras, and $68 million to El Salvador. The following year, during the first Trump administration budget, the funding fell even lower, to $69 million for Guatemala, $66 million for Honduras and $46 million for El Salvador.

The Biden administration plans to reverse course somewhat in 2022 with a $4 billion, four-year Central American initiative. It is worth noting that overall D.H.S. spending on enforcement remains unchanged, and the administration is even seeking a $291 million boost for the Border Patrol, now funded above $5 billion for the first time.

“Our legal immigration system...hasn’t been revamped in 55 years,” Mr. Kerwin points out. “We haven’t had a large legalization program since 1986.”

The United States could be more generous in other ways beyond its aid policy. Opening more legal pathways into the United States would alleviate the crush at the border by creating real competition for the criminal entrepreneurs that feed off illegal migration and in turn promote it. How many migrants would make a dangerous journey to an uncertain welcome at the border if there were a realistic chance of managing their emigration legally?

But for many people categorized as low-skilled workers, like many of the Haitian migrants at Del Rio, backlogs, quotas and waiting lists mean there is essentially no legal path into the United States. The United States limits EB-3 visas for “unskilled” workers to just 10,000 each year. Many immigration analysts believe that figure could be scaled significantly higher and unused visas “recaptured,” especially at a time when employers struggle to fill thousands of positions that current U.S. residents are unwilling to accept.

With the likelihood that migration to the U.S. border will only increase in the near term before conditions stabilize in other North and South American nations, U.S. officials need to shore up existing structures and create new ones. Current mechanisms like Temporary Protected Status only cover immigrants already in the United States, and refugee resettlement quotas are inadequate to the problem (and the system gutted during the Trump administration), according to Mr. Kerwin. The asylum system requires would-be immigrants to make their way to the border to apply, a Catch-22 if the hope is to prevent more unhappy experiences at the border.

But expanding humanitarian parole at the border and restoring the asylum adjudication capacity diminished during the Trump administration, Mr. Kerwin suggests, is a step toward a more humane approach. That would allow migrants to quickly be moved from the border region into the United States while their asylum appeals are heard.

He suggests that the United States could create and begin issuing humanitarian visas that allow imperiled persons to enter the United States with legal status. That would keep them off the precarious migrant trail altogether and prevent the enrichment and empowerment of criminal networks that destabilize life in Mexico (creating yet another push factor for migration into the United States).

With the likelihood that migration to the U.S. border will only increase before conditions stabilize in other North and South American nations, U.S. officials need to shore up existing structures and create new ones.

But nothing will change until Congress makes broad immigration reform, moldering since 2013, a bipartisan priority.

“Our legal immigration system...hasn’t been revamped in 55 years,” Mr. Kerwin points out. “We haven’t had a large legalization program since 1986.”

The latest attempt to revisit immigration policy was turned back on Sept. 19, the same day of the confrontation in Del Rio, when the Senate’s parliamentarian ruled that immigration reform legislation could not be included in a recent budget reconciliation package.

As a policy standalone that will now have to make its way through Congress, the Biden administration’s U.S. Citizenship Act would revitalize immigration policy, and it includes provisions to substantially respond to the current migration press from Guatemala, El Salvador and Honduras.

It would also create “the largest legalization program in U.S. history for people who are already here, and that would be a positive thing, of course, in itself,” Mr. Kerwin says, that in turn would create “other legal opportunities for people to be admitted.”

But despite all the outrage and finger-pointing this week on immigration, there seems little reason to hope that the 117th Congress will break a long-term trend of inaction. Immigration, Mr. Kerwin says, remains “a politically contentious issue, unfortunately.”

There are plenty of better solutions and models to choose from, Mr. Kerwin says, that lead to a more just, orderly and humane alternative to the current system. Congress merely has to approve them.