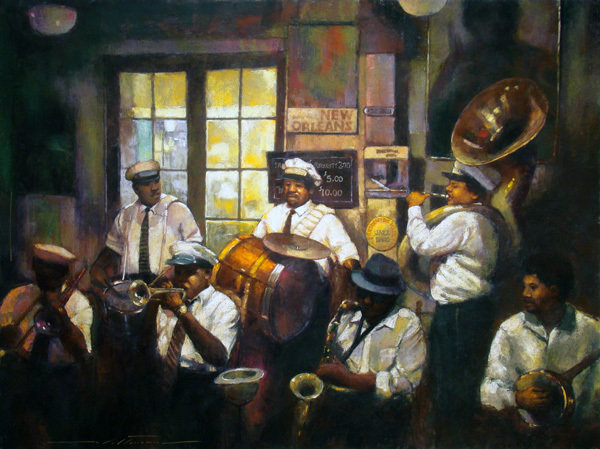 In 1857, in a decree that flouted Louisiana case law that allowed white men to free their enslaved children, paramours and common-law wives, the Louisiana legislature voted that slavery could no longer be reversed. It was one more tightening of the screws by plantation interests against Blacks as the legislature grew more polarized over the slave economy.

In 1858, New Orleans closed an African Methodist Episcopal church after police raids for “unlawful assembly” of enslaved and free Blacks. The city of 116,000, the nation’s largest market in the sale of human beings, had nearly 10,000 free people of color. Leaders of this population voiced French Revolution ideals of liberty in challenging white supremacy.

Free Black militiamen had fought in the 1815 Battle of New Orleans, defeating the British in the War of 1812. Many Creoles of color came from French-speaking Catholic families with slaveholding backgrounds and ancestral roots in Haiti. Blacks who secured their freedom gained status with Creoles in a caste beneath the white elite.

With its recurrent yellow fever epidemics, New Orleans was dotted with benevolent societies whose dues covered the members’ burial costs and festive gatherings. The Société d’Économie et d’Assistance Mutuelle erected a three-story building that became known as Economy Hall. Dance orchestras performed there; mourners held post-funeral repasts there. During the Civil War, the hall secretly stored weapons for Blacks in the Louisiana Native Guard as they fought Confederate troops.

Fatima Shaik's stunning book stems from the author’s tenacity in excavating the contours of a culture and a keen eye for the people who sustained it.

Economy Hall is better known as a popular venue in the early 1900s for seminal jazz musicians like Kid Ory and Louis Armstrong. “Most of the people who wrote about the hall never entered the building and probably knew none of the Économie members,” writes Fatima Shaik. “The audience heard the rough and spontaneous harmony without understanding that the songs came from the history of slavery and the struggle for suffrage, the irrationality of race prejudice and the violence of its application.”

This stunning book stems from the author’s tenacity in excavating the contours of a culture and a keen eye for the people who sustained it. Shaik grew up in the 1950s in the Seventh Ward, a hearth of the Creole culture. When Economy Hall closed, her father, an educator named Mohammed Shaik, rescued its ledgers from a dumpster, “some with marbleized paper covers and spines that were two inches wide. The oldest books had thick, ochre-colored pages made of rag paper. The later ones contained smooth, blue-lined stock. Crammed between thin margins was French script as elegant as a satin-stitched monogram on a linen handkerchief.”

The internal records spanned a century and for several decades sat on a shelf in the family home. Fatima Shaik became a professor, publishing novels and short stories along the way. On a trip home in 1997, she began reading the documents her father had saved and immersed herself in a long search for information on the men quoted in the meeting minutes.

Pierre Casanave, a wealthy undertaker who sent marching bands behind buggy hearses and advertised his mortuary in white newspapers, was Economy Hall president in 1858. His words to fraternal members were stark: “We know our oppressors clap hands and are fortified in their opinions that we are incapable of anything good, we are born to be their slaves, that the passion of degradation is insinuated in our hearts.”

Another hall leader, Henry Louis Rey, was an influential member of the much smaller Cercle Harmonique, a group of Spiritualists who transcribed voices of the dead channeled at seances held near Economy Hall—a range of voices from St. Vincent de Paul to the martyred Abraham Lincoln, urging the Cercle believers to keep faith in the pursuit of freedom. The Cercle’s detailed records of 1857 to 1877 are housed at the archives of the University of New Orleans. In this section of her book, Shaik builds on the groundbreaking works of Carolyn Cossé Bell, Emily Suzanne Clark and Melissa Taggett.

Rey also wrote for L’Union, the crusading newspaper launched in 1862, impressively chronicled in Clint Bruce’s Afro-Creole Poetry. “Consisting of one sheet, front and back, in French, the paper featured a lengthy denunciation of slavery in Louisiana,” writes Bruce, and “letters between Victor Hugo and the Haitian newspaper editor Eugéne Heurtelou, situating [slavery] within the revolutionary Atlantic context.” In 1864, the publisher met with President Lincoln, presenting a petition with thousands of signatures of free citizens of color seeking freedom and rights for all Blacks. L’Union folded later that year; but its publisher, the Parisian-trained Dr. Louis Charles Roudanez, launched a sequel, La Tribune. A contributor to both papers, the Spiritualist Henry Louis Rey published a poem in 1865 faithful to their vision:

What matters it that cannons roar,
That all around an open tomb yawns;
For ’tis the end of one bad world
As another, much more beautiful dawns!

In the postwar city, Creole leaders won elections and oversaw the desegregation of public schools, a short-lived experiment destroyed by the war after the war—Reconstruction, bringing with it lynching as the tool for restoring white supremacy.

As full justice lost out to white mobs and resurgent segregation laws, Economy Hall carried a memory that Fatima Shaik began absorbing after its closure, “on porch steps, in corner groceries, during baptism breakfasts, and especially at the dinner table. At some point in every gathering, family members and friends would bring up their disappeared and deceased relatives, then launch into their history. Each spoke of the past with the passion of a man wrongfully accused of a crime who repeats over and over his account of the moment that proves his innocence.”

“I nodded and smiled,” she continues, as the ledger books sat on a shelf. “But I was a skeptic. I thought my family was just trying to give me hope because almost everything I read said that all Negroes were slaves and anyone who mixed with them was inferior.”

With Economy Hall, the author illuminates her ancestral world, giving voice to a freedom quest with powerful echoes today.

This article also appeared in print, under the headline “Afro-Creole prophets of Black Lives Matter,” in the June 2021, issue.

Jason Berry is the author, most recently, of City of a Million Dreams: A History of New Orleans at Year 300, the subject of a new documentary film.

@JasonBerryNews
Show Comments ()
Join the conversation: Login or create an account
Before you can comment, you need to update your profile to include your first and last name, as required in our comments policy. Then reload this page and you'll be set up for commenting. Update your profile