A love song for Ernest Gaines 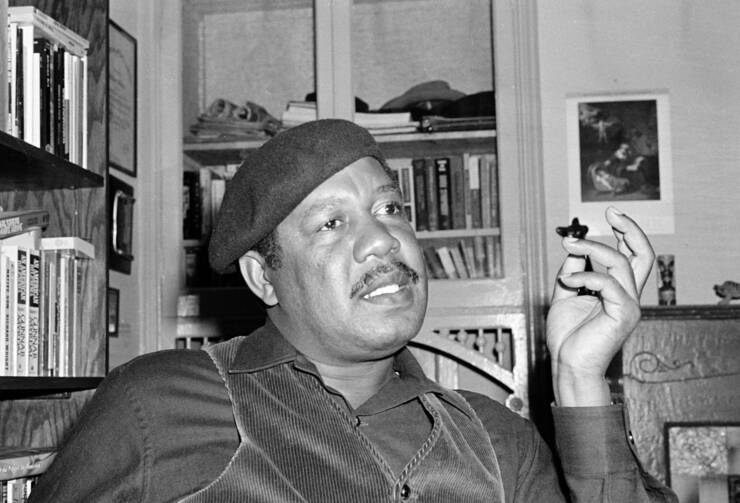 The novelist Ernest J. Gaines, who died in his sleep on Nov. 5, 2019, at the age of 86 in his home in Oscar, La., published nine books in a distinguished career. The Autobiography of Miss Jane Pittman and A Lesson Before Dying, which received the National Book Critics Circle award for fiction, are classics. His short story, “The Sky Is Gray,” is widely taught, among other Gaines stories that illuminate rituals of endurance in the era of Jim Crow cruelties.

Gaines created a cosmos in the fictional town of Bayonne, drawing from his upbringing amid Depression-era poverty in sharecroppers’ quarters behind a False River plantation house in Pointe Coupee Parish. It is the same terrain where Gaines breathed his last, albeit in a spacious house that he and his wife, Dianne Saulney Gaines, built in the 1990s after he received a MacArthur fellowship. By then he was writer-in-residence at the University of Louisiana, Lafayette, with a long list of accolades.

Gaines created a cosmos in the fictional town of Bayonne, drawing from his upbringing amid Depression-era poverty in sharecroppers’ quarters behind a False River plantation house in Pointe Coupee Parish.

Rehabilitating “the old place,” as Ernie called it, was a vanquishing of the past. The outhouses and shacks had largely disappeared, the voices a timeless chorus in his books. He restored the rural graveyard with the resting place of his aunt, Miss Augusteen Jefferson, an inspiration for Miss Jane Pittman.

In dedicating that 1971 novel, celebrated for its epic sweep from Reconstruction through the Civil Rights era following the course of one woman’s life, Gaines cited “my beloved aunt...who did not walk a day in her life but who taught me the importance of standing.”

Newsweek requested a photo of Miss Jane Pittman. “The actress Ruby Dee, when reviewing the novel for [the journal] Freedomways, also mistook Miss Jane for a real person,” an amused Gaines would write in an essay, “Miss Jane and I,” years later. “One lady accused me of using a tape recorder, then calling the interview a novel after I had cut out all the inconsequential material.”

His nurturing aunt “crawled over the floor as a six-month-old child might. Some people have said that she had been dropped on the floor by another child when she was small; others have said that she was born with that affliction. To this day I do not know which story is true.” In the cabin where she lived, cooked and oversaw youngsters, older folk gathered. Gaines listened to their stories; some people paid him to write their letters. “I learned to write what I thought they would like to say and write it fast.”

Without access to a library or high school, the 15-year-old in 1948 made an emotional farewell to the aunt he would never see again, and caught a bus to join his mother and stepfather in Vallejo, Calif., where they found jobs. With a library card he discovered the novels of Steinbeck, Willa Cather and Russians like Chekhov, Gogol, Turgenev and Tolstoy, whose stories of a social hierarchy with peasants had resonance for him. For Southern writers, he later wrote, “blacks were either caricatures of human beings or they were problems. They were either children or they were seers. But they were very seldom what the average being was.”

After high school and military service, Gaines studied at San Francisco State, and then received a Stanford fellowship for an M.A. in creative writing. He hunkered down in San Francisco working on stories and a novel that met with years of rejections. In 1962 he made his first trip back to Louisiana, “back into the past.” For six months he experienced “house fairs, with gumbos and fried fish…deaths, wakes, funerals, baptisms, even threats of racial violence.” On return to San Francisco, he had “a few bitter words through letters and over the telephone” with a New York editor interested in the novel. Gaines cut the 700 page manuscript in half. In 1964 Catherine Carmier was published “and just as soon forgotten.”

As he made more trips home, The Autobiography of Miss Jane Pittman took shape. It had gone through 19 paperback editions and become a movie starring Cicely Tyson when Gaines inscribed my copy in Lafayette, La., on Sept. 22, 1978.

Ernest Gaines was 45 when we met, a hefty man with the “Great Writer” gravitas, yet an amiability he could turn on or off like a faucet.

We met at a writers festival after exchanging letters. The novel had rocked me, viscerally and spiritually, when I read it over several coffee-fueled nights in a $75-a-month apartment in the Irish Channel neighborhood of New Orleans. In 1973, I had published my first book, Amazing Grace: With Charles Evers in Mississippi, an account of the civil rights leader’s quixotic run for governor. I was writing freelance for a range of outlets, discovering jazz at clubs and on records, reading in silence until the wee hours of the morning.

She had flower bushes all over the yard, but no flowers, because it was winter. She had bottles stuck upside down round all the flower bushes and two rows of bottles side the walk from the gate up to the house. Bottles every color you can mention. She had scrubbed the gallery that morning, and she had sprinkled red brick over the gallery and steps. She must ‘a’ heard me stop the wagon because she answered the door soon as I knocked.

Gaines was 45 when we met, a hefty man with the “Great Writer” gravitas, yet an amiability he could turn on or off like a faucet. In later years he called me podna, a term of endearment among Southern males of both races. That first day, talking over coffee, I confided about my struggle with rejections on a novel. He nodded. “Rejections. I’ve known those.” With a passing reference to turn-downs of his early fiction, he said: “Keep working; keep working.” The words of solidarity from an esteemed author held deep comfort.

With a passing reference to turn-downs of his early fiction, he said: “Keep working; keep working.” The words of solidarity from an esteemed author held deep comfort.

I was researching a long essay on links between jazz and literature, arguing that the memoirs of Louis Armstrong, Sidney Bechet and Jelly Roll Morton deserved their own genre. Gaines warmed to the idea. Later I sent the piece that ran in Southern Exposure; he wrote to me on April 11, 1979, from San Francisco:

Yes, there’s definitely a Jazz language, which we fiction writers are trying to use. (You mentioned the names, so there’s no need for me to re-mention them here.) But I think in my case I’ve been just as much influenced by the great blues singers as by the Jazz players. Remember, I come out of the Deep South—the plantation South. Rural blues music was our music. But the Jazz language is with us all…. I always have music in the background when I’m writing, and play music all the time when I have nothing else to do. When I travel by car, and I travel a lot, I’m forever listening to music. Prez [saxophonist Lester Young] is probably my favorite but I listen to all of them.

Gaines unloosed a riff on Ralph Ellison, whom I’d quoted from his book of essays, Shadow and Act.

Though I can agree with much of it (his definition of the blues, etc.) just as much of his work confuses the living hell out of me. I wish he could state things much simpler. (Remember the Lord’s Prayer? Chief Joseph’s farewell speech? The Gettysburg Address? Three fantastic pieces of work—simple, simple, simple. This leads into Invisible Man, which I consider a great book, but I don’t know if it’s a great novel. Too controlled. Great novels must flow. Somewhere the characters must take over. He gives them just so much rope, then he jerks them back into “place.” Writers are gods over their characters, but even God lets us go astray at times. Ellison never does. They can only do what he wishes. Jazz spreads out, flows, is free. Ellison’s characters are never free. They’re too busy being symbols. He’s always telling them what to do.

Was he offended that his aunt lay in an unmarked grave? “No,” he said, gazing at the yellow flowers. “She’s still there, a part of me, with the others.”

Gaines’s heeding of his characters’ restlessness charges A Lesson Before Dying. The narrator, Grant Wiggins, is a schoolteacher forced to prepare an inmate wrongly-accused of murder to face execution. Grappling with his own alienation, Wiggins must rally a community behind the prisoner to persuade the man his life has meaning. Wiggins stands outside the school, watching older boys on a break, chopping wood. “Am I reaching them at all? They are acting exactly as the old men did earlier. They are fifty years younger, maybe more, but doing the same thing those old men did who never attended school a day in their life. Is it just a vicious circle? Am I doing anything?”

Barack Obama and the Limits of Optimism
Jason Berry

On reading the galleys, I asked Gaines if he’d do an interview at “the old place” (which he had not yet bought). On a milky February day in 1993 we drove from his office at University of Louisiana, Lafayette; an hour later we were standing in a graveyard. “The privies [outhouses] were all in a row behind those trees,” he said, pointing toward False River. “Every house had one on the ditch. My grandmother’s house had a faucet on the road, and we’d go draw the water and bring it to the house.”

Birds fluttered toward drifting clouds. Where, I asked, was his aunt Miss Augusteen Jefferson buried? “I don’t know,” he replied, just above a whisper.

Was he offended that she lay in an unmarked grave? “No,” he said, gazing at the yellow flowers. “She’s still there, a part of me, with the others.”

Jason Berry is finishing a film documentary on jazz funerals, drawn from his recent book, City of a Million Dreams.

@JasonBerryNews
Show Comments ()
Join the conversation: Login or create an account
Before you can comment, you need to update your profile to include your first and last name, as required in our comments policy. Then reload this page and you'll be set up for commenting. Update your profile
Show Comments ()
Comments are automatically closed two weeks after an article's initial publication. See our comments policy for more.