Director Mike Nichols told beloved stories onscreen. His own life was a story of resilience and transcendence. 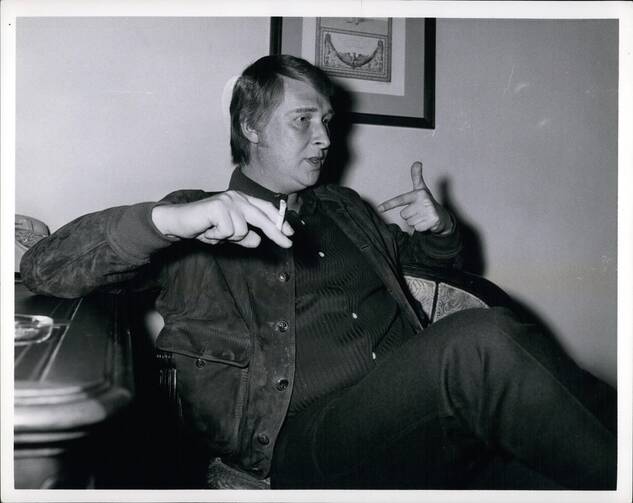 What exactly does a director do? We can see the work of actors and designers in a film or a play, and witness the action and dialogue crafted by writers. But the question of what larger intelligence might have shaped the experience for us verges on the theological; the director’s hand is both unseen and everywhere.

This was especially true of Mike Nichols, the peripatetic director whose five-decade career spanned live comedy, Broadway theater and (most famously) film, from “The Graduate” to “The Birdcage.” His style was famously both sharp and convivial, self-effacing yet unmistakable, and it yielded career-making work out of actors from Robert Redford to Natalie Portman, while bringing out the best in writers as disparate as Neil Simon, Tom Stoppard, Nora Ephron and, perhaps above all, the underrated comic genius Elaine May, his longtime comedy partner.

His vast and diverse career was overdue for a definitive biography, and Mark Harris has delivered it with the majestic page turner Mike Nichols: A Life. About the highest tribute I can offer this biography is that it is not unlike a Nichols film itself (one of the good ones, at least): rich, incisive, dense with detail yet somehow brisk, unabashed by darkness but oriented always toward humanity, connection, light.

The story begins in a dimly remembered Berlin, from which 7-year-old Michael Igor Peschkowsky and his brother were hastily shipped in 1939, reuniting with their parents for a typically hardscrabble New York City Jewish immigrant life of hard work and difficult living, leavened by escapes to the theater and the movies. Young Mike added one unique challenge to the mix: Hairless since a reaction to a whooping cough vaccine, he spent much of his childhood and adolescence alternately bullied and pitied for his baldness, only coming into his own when he got his first wig at around age 14, after his father died suddenly of leukemia. The wigs would get better as his career path became clearer, but the elements that would create the character of Mike Nichols were in place. Directing would later become his way of being a father to others, and the anger and humiliation of his early life would become the fuel of a lacerating comic sensibility.

The highest tribute I can offer this biography is that it is not unlike a Nichols film itself: incisive, dense with detail yet somehow brisk.

It is hard now to recapture the sensational impact that Nichols created with Elaine May in the late 1950s. The two produced a series of razor-sharp satirical sketches that they had honed at a small Chicago theater called the Compass Players and later performed to acclaim on television and on Broadway. That impact is hard to recapture partly because their prickly, urbane style became a template for so much comedy to follow, from some of the better television sitcoms of the ’60s to the improv-driven sketch comedy of “Saturday Night Live.”

It is also because so much of the duo’s magic was of the you-had-to-be-there kind. This is one area where Harris, the biographer, particularly excels: recreating a sense of ephemeral theatrical performances that nevertheless etched themselves into the consciousness of generations. Neil Simon’s early hit plays “Barefoot in the Park” and “The Odd Couple,” of which Nichols was as much midwife as director, seem old hat now, but Harris makes clear how groundbreaking they were as embodied stage works. Nichols distinguished himself not so much as a director of dialogue—though he was an ace editor in this area, as in most—but as a director of physical action, finding things for his actors to do that expressed as much as any lines could, sometimes more. It is a thread that runs all the way to his last film, the so-so “Charlie Wilson’s War,” when he had Julia Roberts unflinchingly do her makeup, including separating her eyelashes, while delivering a long speech about armaments specs.

We might not still be talking about Nichols at all if he had not kicked off his film directing career with “Who’s Afraid of Virginia Woolf?” and “The Graduate.”

We might not still be talking about Nichols at all if he had not kicked off his film directing career with the one-two punch of “Who’s Afraid of Virginia Woolf?” and “The Graduate.” They were both defining works of the 1960s into which he poured everything he knew about contemporary American life, and both pushed the envelope on content in mainstream films. Though he would seldom be as central to the cultural zeitgeist as with those two films, it is striking how often he made work that could be seen as decade-defining, for better or worse, from the sexually frank “Carnal Knowledge” in 1971 to the capitalist Cinderella story of “Working Girl” in 1988, from the lively gay farce “The Birdcage,” an unlikely blockbuster in 1996, to the magisterial two-part film for HBO, “Angels in America” in 2003.

It is also striking how much he kept coming back to the theater, right up to his triumphant 2012 staging of “Death of a Salesman”; his biggest stage hit was, remarkably, 2004’s “Spamalot,” a rollicking stage simulation of Monty Python. A bit away from the spotlight, Harris quietly makes a case for two projects that belie Nichols’s reputation for glittering comedies and dramas among the well-heeled class to which he belonged: “Streamers,” a grippingly visceral stage play from 1976 by David Rabe about violence among Vietnam-era soldiers in training, and “Silkwood,” a hugely underrated (and currently un-streamable) film from 1983 about a nuclear-power whistleblower, which began a fruitful association with Meryl Streep.

Meryl Streep is one of a long series of female collaborators with whom Nichols bonded.

Streep is one of a long series of female collaborators with whom Nichols bonded, starting with May and including Ephron and Emma Thompson. While he also formed strong bonds with men, and retained many of the sexist attitudes typical of show business men of his generation, Nichols had a gift for sensitive and attentive listening that earned his actors’ trust. As Audra McDonald, whom he directed in a film version of the play “Wit,” puts it, “You didn’t feel the direction. He did it so subtly that it felt like he was just lightly touching a ball that was already rolling down a hill.” Nichols might be describing his own knack for inspiring solidarity among his creative teams when he says of Streep’s rapport with a film crew, “She just somehow moved her soul around.”

This all describes Nichols at his best, when he felt engaged by the work at hand. Harris also details a series of misbegotten productions, from “Day of the Dolphin” to “Wolf,” for which Nichols was poorly suited and in which his vaunted talents for camaraderie were noticeably lacking.

Nor does Harris skimp on the details of Nichols’s profligate life. Like many who go overnight from poverty to wealth, as he did with the success of Nichols and May, he became a compulsive big spender on everything from Arabian horses to luxury apartments. He was also married four times, the last time to newscaster Diane Sawyer. His addictive personality led to a dangerous dependence on cocaine, but most often found its expression in his attachment to his work. Some of his most disastrous projects, as well as the good ones, came about because he was simply “itching to direct,” a job he realized early on “that I would never use up. This was something I knew I could never tire of.”

One of the book’s subtle but consistent threads is that under all this personal and professional restlessness was a deeply buried survivor’s guilt. Meeting a fellow refugee from the Holocaust late in life, Nichols recognizes that he had been in “flight from himself” since he was a bald Jewish kid on a ship to America. Though Harris doesn’t make the connection explicit, this deep background may explain the rich resonance of Nichols’s best work: It has both the awed, smiling gratitude of a newcomer to a country full of wonders, and, like the lovers fleeing on the bus at the end of “The Graduate,” an abiding uncertainty about what to do with that abundance. All you can do is hold hands with the equally frightened person next to you until you reach your destination. No one knows what the director has in store.

This article also appeared in print, under the headline “An artist of gratitude and uncertainty,” in the Spring Literary Review 2021, issue.