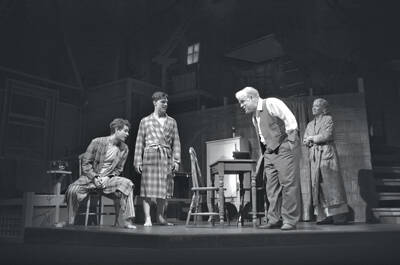 The claim of “relevance” is nearly irresistible to some critics and other performing arts boosters, particularly those who fret about the health and future of theater in an age of Netflix and the 24-hour news cycle. The notion that this or that classic play is “still relevant”—or “more relevant than ever”—competes with the discernment of a work’s “universal themes” for most shopworn critical cliché. It should be clear by now that we return to great works for pleasures quite apart from how well they reflect us and our time, and that a classic play will nearly always strike us as relevant and, yes, universal; this is the definition of a classic.

Even though your high school English teacher said it, it is still true: Arthur Miller’s Death of a Salesman is a classic, even a towering one. This has as much to do with its lacerating insights into American capitalism as it is actually lived, paycheck to paycheck and bill by bill, as with its psychological acuity and near-perfect form. Every scene is a beautifully constructed mini-play unto itself, yet none ends without launching an arrow forward to the next. The result, even in a mediocre production, is an inexorable tragic momentum that gives Miller’s social critique the dramatic force that makes it worth reviving.

The new Broadway production directed by Mike Nichols is far from mediocre. It is a revelation, majestic yet unfailingly intimate, and it makes this 63-year-old show breathe and bark like a freshly born thing. If the play’s steady drumbeat of unpaid bills and unfulfilled aspirations seems especially timely in the midst of our still-stagnant economy, so much the better. But in fact, it premiered in 1949, a time of relative postwar plenty, and was memorably revived during a new (if arguably false) dawn of American optimism, in 1984, with Dustin Hoffman in the lead.

The new production’s uncanny freshness springs in part from a paradox. Nichols has lovingly preserved two key elements of the original production directed by Elia Kazan, which he witnessed as an awe-struck teenager: Jo Mielziner’s skeletal, shambolic set and Alex North’s limpid, ruminative score. Rather than lock the play in reverent museum mode, though, these iconic accompaniments feel as integral to the play’s architecture and meaning as Miller’s similarly iconic dialogue.

The other reason for this revival’s vividness and vigor may be more obvious, though it is no less astonishing: the actors. To a person, Nichols’s casting consists of risky gambles that pay off big-time. These start at the top with Philip Seymour Hoffman, who at 44 is only a few years younger than the last Hoffman (Dustin, who was 47) to tackle the role of Willy Loman, a washed-up gladhander who is supposed to be an exhausted 63.

It is not his age that makes the new Hoffman a bold choice for the role but his introverted, almost pigeon-toed awkwardness, his crabbed averageness. This is Willy Loman not as a fallen, tragic hero but as a sad schlub aching from worn out arch supports—the kind of human wreck people avoid because he makes them feel a sickly pity, something close to disgust, as he natters compulsively about his imaginary influence and unseen triumphs. It may be that we flee desperate people because we fear their desperation might rub off on us somehow. Hoffman’s Willy is a man who cannot shake desperation’s taint.

The actors playing his immediate family also skew young: raw, wiry Andrew Garfield as the beloved but wayward first-born, Biff; the scrubbed-cheek Finn Wittrock as the womanizing Happy; Linda Emond as the resilient, no-fuss matron, Linda. If these younger-than-usual Lomans are at first hard to believe as a family grinding down into its desolate twilight years, the actors’ youth is a huge boon in the play’s frequent flashbacks to a more idyllic time; these reveries have a palpable, “what might have been” glow. This in turn makes the lurch back to the play’s grim present that much more wrenching, and Willy’s capitulation to what feels like a premature obsolescence that much more awful.

Life at the Intersection

It is in the play’s fluid, dreamlike transit between past and present, and between real and imaginary, that Nichols’s two great inspirations intersect. While Mielziner’s set perfectly frames Willy’s free-ranging consciousness, as if the play’s action takes place all or mostly in his own head, the actors who move through this abstracted world are not themselves abstractions or vintage replicas but flesh-and-blood creatures of startling, nerve-jangling immediacy.

It is an extraordinarily potent juxtaposition. It may be easy to forget because we take it for granted, but this blend of gritty realism and surreal, only-in-the-theater lyricism used to be the secret recipe that set mid-century American theater apart from its antecedents. It defined the early careers of Miller and Tennessee Williams. And though trace elements of this powerful mixture can be found in plays by Edward Albee, August Wilson, Tony Kushner and Paula Vogel, it is seldom glimpsed anymore on this scale or rendered this definitively among the frittering diversions of today’s Broadway.

Although the American economy still shows distressingly few signs of life, this “Death of a Salesman” affirms that a great American theater tradition remains as fresh and vital as tonight’s news (more so, actually, given the dispiriting repetition of nightly news). That kind of relevance does matter when it comes to the theater: not merely topical, but able to get deep under our skin.