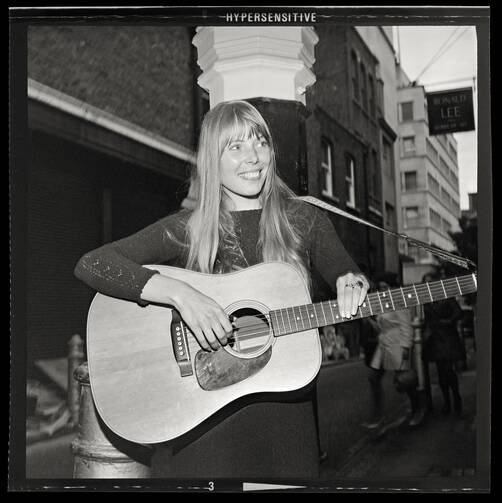 The biographical fallacy—the idea that artists’ work should primarily be interpreted in light of the events of their lives—has dogged Joni Mitchell from the start of her public career as a singer/songwriter. Guessing which lover or friend inspired which song has long been a parlor game for her fans, and in some cases this intention is unconcealed: “Song for Sharon” has its dedicatee, a childhood friend named Sharon Bell, in the title; “Willy” was her nickname for longtime housemate Graham Nash.

But this is a limiting, and arguably sexist, way to view her song catalogue, which ranks among the greatest a (Canadian-) American artist has produced, from the universality of hits like “Both Sides, Now” and “Big Yellow Taxi” to the complicated idiosyncrasies of narrative songs like “Harry’s House/Centerpiece” or the piano/orchestra suite “Paprika Plains.” For a run of 10 albums between 1968 and 1979, from the folky “Song to a Seagull” to the jazz-inspired “Mingus,” Mitchell had one of the legendary hot streaks in pop music, rivaled among her peers only by the likes of Stevie Wonder or Bob Dylan.

Mitchell had one of the legendary hot streaks in pop music, rivaled among her peers only by the likes of Stevie Wonder or Bob Dylan.

Like Randy Newman or Leonard Cohen, Mitchell was at first a songwriter’s songwriter, whose tunes were mostly hits for other singers. That all changed with the 1971 album “Blue,” which included a string of career-defining tracks (“All I Want,” “A Case of You,” “California,” “River,” “Carey”) written and recorded during her fertile sojourn as part of a cross-pollinating music scene in Los Angeles’s Laurel Canyon neighborhood, alongside the likes of Crosby, Stills & Nash, Neil Young and James Taylor.

The records that followed—including my two favorites of hers, “For the Roses” and “Hejira”—built on the confessional, intimate tone of “Blue” but also departed from it, rendering thornier subjects across ever more ambitious soundscapes. While this sonic adventuring alienated some of her fans (and her post-1980 output has been considerably spottier, with a few exceptions), time has vindicated these later experiments; and her creative influence on generations of musicians, from Prince to Brandi Carlisle, is tectonic.

A new, five-CD boxed set, titled “Joni Mitchell Archives Vol. 1: The Early Years (1963-1967),” shines a light on the period before she landed a record deal, from early folk demos she recorded at a Saskatchewan radio station to live sets at Toronto coffeehouses and clubs, where she tried out the songs that would later fill her first few records. At nearly six hours of material, much of it repetitive if not quite redundant, it may collect the music that introduced Joni Mitchell to the world, but it hardly makes the ideal introduction for the uninitiated. Its chief audience would seem to be the diehard fans who can detect slight differences of inflection among different versions of the same song.

Like Randy Newman or Leonard Cohen, Mitchell was at first a songwriter’s songwriter whose tunes were mostly hits for other singers.

Still, like a master painter’s sketchbooks, “Archives” is uniquely revealing of the roots of Mitchell’s distinctive voice both as a singer and a writer. She begins the early 1960s with a repertoire of folk standards, from “John Hardy” to “Molly Malone,” played on a baritone ukulele and warbled in a prim soprano. This soon gives way to more far-ranging covers, a more aggressive vocal attack and the addition of dulcimer and guitar to her arsenal.

Most strikingly, on the faux-calypso song “Sail Away,” made popular by the folk music trio the Journeymen, her arrangement uses a jarring tritone chord progression that is not in the original. It sounds for all the world like the kind of “mistake” amateurs stumble upon as they are learning their craft, but it is a sign of Mitchell’s genius that she plays it with a joyous confidence and makes it work for the song. She would later use the same progression in some of her more ambitious compositions.

“Day After Day” and “Urge for Going” are hard-bitten accounts of women trapped and chafing at their lot.

By the time her originals start to appear, they sound a bit like some of the darker, quieter folk material she’s been playing; this is no longer the willowy innocent from the plains of Saskatoon. “Day After Day” and “Urge for Going” are hard-bitten accounts of women trapped and chafing at their lot. Before long they give way not only to the philosophical musings of such accessible classics as “The Circle Game” and “Both Sides, Now,” but also to a raft of intensely personal, even peculiar artisanal creations.

Some show the influence of Dylan, who was at the time expanding the definition of folk to encompass a wild, word-drunk individualism. But most are distinctly and unmistakably Joni: musically brilliant, lyrically knotty, tuned to a station only she can hear. It is this vein she would go on to tap in her best work; even her most ebullient pop creations would spring from the same well of nuance and complication she discovered in these early years.

It’s true that some of this development, including the darkening and deepening of her sound, can be traced to the tumult of her personal life: an unintended pregnancy, a brief marriage of convenience (not to the child’s father), the giving up of the child for adoption, a scramble to make ends meet as a single art student. Mitchell has made no secret of the way these early shocks were transmuted into musical inspiration. But on the evidence of “Archives Vol. 1,” her artistry reached a high level, well beyond a merely therapeutic purpose, very early on.

Take “Little Green,” for example. A coded farewell to the child she gave up for adoption, it appears here in a nascent form, with the same lyrics but slightly different music—another ear-bending chord progression, in fact, which she later scrapped for the more straightforward version we know from “Blue.” We don’t need to know the song’s backstory to feel its loss, disorientation and bittersweet resolution. And we can hear in this early take, and in several others, the sound of an artist carving her path through the intertwined thickets of her life and her art. It is for the latter that Mitchell is rightly cherished.