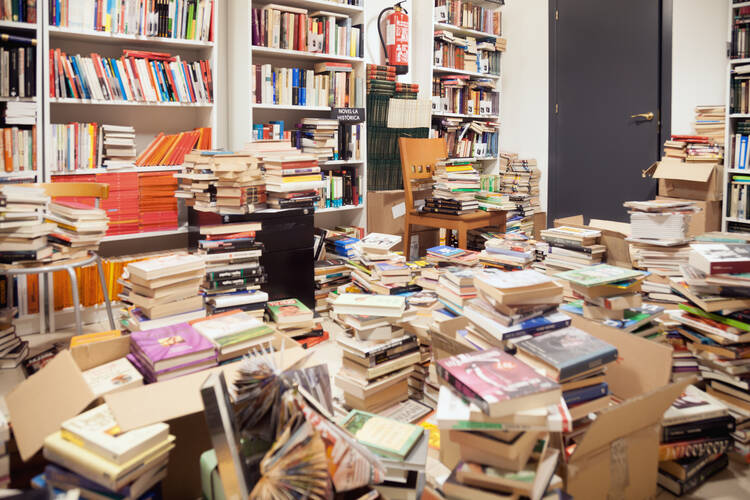 Several years ago I played on a softball team in New York City made up of people of all different ages and walks of life. One night as a group of us rode home on the subway, the youngest member of the team discovered that two of us were book editors: At the time, I was at Orbis Books, and our pitcher was at a big commercial publishing house. “This is my chance to get great reading suggestions!” she gushed. “What do editors read for fun?”

My fellow editor fastened her with a gimlet eye and shrugged: “Facebook, mostly.”

We all laughed, but there was some truth to her reply. For many people (not just editors), reading can be a heavy thing, an arduous and all-consuming task, and we need some lighter fare on occasion. I like to think that nothing in this Spring Books literary issue is as vapid as Facebook (I just checked mine; all’s well), but I do think we offer writers and books that meet a variety of needs and wants, from deep theological takes to the silly tropes of fiction aimed at teenage boys.

This special literary issue offers writers and books that meet a variety of needs and wants, from deep theological takes to the silly tropes of fiction aimed at teenage boys.

Our two features are profiles of serious authors by serious thinkers: the philosopher James K. A. Smith on the moral vision of Iris Murdoch and the theologian Vincent J. Miller on the ethical landscapes of the nature writer Barry Lopez. Also, Jessica Mesman takes us into the raw anger and confusion of C. S. Lewis’s A Grief Observed, in which Lewis “renders in prose what it really feels like to grieve”; and Jason Myers offers an appreciation of the recently deceased poet Mary Oliver.

Emma Winters writes about a different class of versifiers: Instagram poets. Yes, that’s a thing—and it’s not all bad (O.K., a lot of it really is). But “by virtue of being available for free on Instagram,” Winters notes, their work is “democratizing how poetry is shared and who can write it, bypassing literary journals and M.F.A. programs. This has brought poetry back into the public discourse and given those who have historically been marginalized in the publishing world—including women and people of color—a new way to make their voices heard.”

There is no subject under the sun that the prolific Jon M. Sweeney is not interested in or not writing on, from cats in the Vatican to Meister Eckhart, and his contribution here is once again learned and eclectic: “Popes in Fiction: What Do They Say About Us?”

Another polymath is John W. Miller, a former foreign correspondent for The Wall Street Journal who eschews his normally more political writing to review Steve Brusatte’s book on a subject rather dear to this editor’s heart as well: The Rise and Fall of the Dinosaurs. And the longtime America contributor Diane Scharper reviews The Friend, the National Book Award–winning novel by Sigrid Nunez. “One of its hallmarks is a memoir-like quality,” Scharper notes, “a plot that zig-zags on the road of real and invented, a tone that is conversational and a discursive style.”

Fickle Catholics who filled out their March Madness bracket with too many Jesuit schools might have mourned the exit of Gonzaga earlier this month, but its most famous alumnus, Bing Crosby, is featured here.

Fickle Catholics who filled out their March Madness bracket with too many Jesuit schools might have mourned the exit of Gonzaga University from the N.C.A.A. tournament earlier this month, but its most famous alumnus is featured here, in John Anderson’s review of Gary Giddins’s Bing Crosby: Swinging on a Star. “Radio, which dominated the ’40s, was ideal for Crosby,” Anderson writes. “He was not made for our visual world, but he ruled his own, its music and its media.”

We also have an update for our readers on two recent selections for the ever-growing Catholic Book Club: Kate Bowler’s beautiful memoir, Everything Happens for a Reason, and a collection of punch-in-the-gut short stories by Andre Dubus, The Winter Father. We’ve also announced our next book, Catholic Modern, by James Chappel, a study of how the Catholic response to totalitarian movements in the 1930s and ’40s radically remade the church itself.

Katelyn Beaty offers the “Last Word” in this issue, in which she stresses the importance of reading widely and deeply, even if that involves authors and topics with which we disagree strongly. “Reading widely reminds me that my understanding of God and God’s world is limited,” she writes. “I need the insights of others in order to fill in what I, owing to ignorance, sin or immaturity, cannot see.”

Oh, and if you’re wondering whose ox was being gored by the mention of “the silly tropes of fiction aimed at teenage boys,” that is my contribution to this issue—a look back at Boys’ Life books from the 1960s.