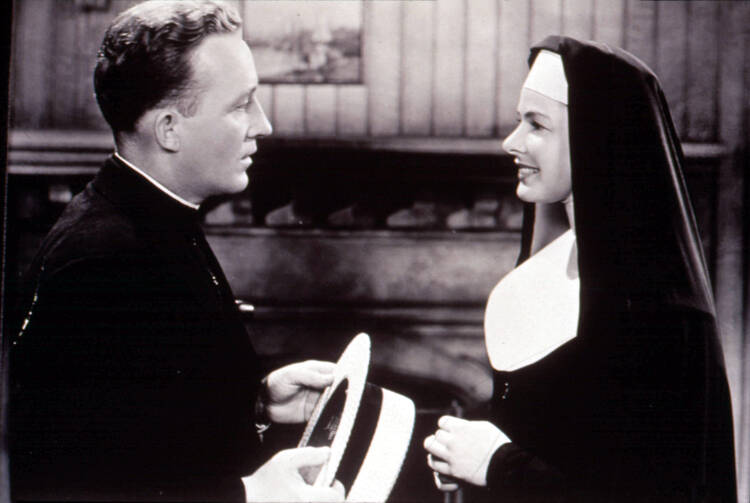 Bing Crosby and Ingrid Bergman in ‘The Bells of St. Mary‘s’ (photo: Alamy)

Last fall in Manhattan, at a party celebrating the publication of Bing Crosby: Swinging on a Star, by Gary Giddins, the assembled literati milled around, sipping wine, congratulating the author and asking him questions. Chief among them: “What took you so long?”

Not an unreasonable thing to ask. The first volume of Giddins’s Crosby biography—subtitled “Pocketful of Dreams”—appeared in 2001. The second and concluding edition was expected by fans of the writer—a National Book Critics Circle winner, a biographer of Charlie Parker and Louis Armstrong, a 30-year jazz columnist at the Village Voice—in a couple of years. Which turned into 17.

Giddins was explaining what had happened and what was happening, when, in a scene out of a ’40s melodrama, Robert Caro walked into the room. You almost had to laugh. Or at least murmur, which is what everyone did.

Caro is, of course, the biographer whose The Years of Lyndon Johnson series began appearing in 1982. Originally planned as a trilogy, it is now expected to conclude with a fifth volume—something that Caro said in early 2018 was going to take him two to 10 more years to finish. He is 83 years old.

Giddins is a considerably younger man, and his Crosby series is now expected to be contained in three books. But, like Caro, he is a biographer who went down an irresistible rabbit hole, found himself in a garden and was compelled to build a cathedral. To do otherwise, one imagines him thinking, would be to cheat history, his subject and, not insignificantly, himself.

Crosby was the most Catholic superstar the United States has ever seen.

But in a significant way, Caro has the edge over Giddins. Bing Crosby’s place in history was never guaranteed. He was not a president of the United States. He never flew solo across the Atlantic, cured a disease or founded a religion. He was, first and foremost, a “crooner”—albeit one of the most influential in 20th-century American popular music, one whose intimate delivery was perfectly suited (and timed) to the invention of the microphone and the rise of both radio and recordings. He was also a radio star of enormous proportions, beginning in 1931 and remaining so for decades. He was a three-time Oscar nominee and a one-time winner (for “Going My Way”). He was a box-office magnet. His version of “White Christmas” is the best-selling record of all time. According to Giddins, he had more No. 1 hits than the Beatles or Elvis Presley.

That Crosby has few equals in 20th-century pop culture, either as an artist or a ubiquitous presence, is an argument Giddins made convincingly in the first book and continues to make here. That Giddins has to make one at all is a testament to the passing nature of celebrity. Imagine someone years from now asking, “Who was Michael Jackson?” It will happen. But it won’t happen to Bing Crosby if Gary Giddins can help it.

In addition to everything else, Crosby was also the most Catholic superstar the United States has ever seen—or at least the biggest superstar who was also so conspicuously Catholic. The indelible Father O’Malley—the suave, crooning, boater-wearing priest Crosby played in “Going My Way” and “The Bells of St. Mary’s”—is probably the best-known cleric in classic cinema. Crosby is also inseparable from Christmas: Who doesn’t own the 1945 “Merry Christmas” album with Crosby in the Santa hat?

The indelible Father O’Malley—the boater-wearing priest Crosby played in “Going My Way” and “The Bells of St. Mary’s”—is probably the best-known cleric in classic cinema.

Born and reared in Tacoma, Wash., Crosby was also the beneficiary of a Jesuit education, a graduate of Gonzaga High School in Spokane (where he excelled in “Christian doctrine”) who dropped out of Gonzaga University in his last year of law school when his performing career took off like a rocket. He was a lifelong practicing Catholic who sought solace in his faith and in his religious friends.

Crosby was a faithful correspondent with his fans, but especially the Catholic ones. His letters of appreciation and advice are quite touching, while full of Crosby’s trademark rhetorical overkill.

As this book commences, a desperate Crosby has decided to leave his alcoholic wife, Dixie (their marriage, naturally, is a huge part of the story here). The star is only talked out of it by (Giddins speculates) Arthur Dussault, S.J., a priest who had been a classmate of Crosby’s at Gonzaga and who later became its public relations director and then a vice president of the university.

But the heart of this book is “the war stuff,” as Giddins told this reviewer, the scope of which he—and most of the American public, even then—was unaware. Giddins noted that the second Mrs. Crosby, Kathryn, would not talk to Giddins for his first book. But after she read it, she changed her mind and also opened up Crosby’s files, where the author found a trove of material about Crosby’s tireless efforts on the home front, including entertaining troops, hosting and playing in countless fundraising golf tournaments, making personal appearances and refusing virtually any opportunity to perform for profit, preferring to do it free for the boys in uniform.

Giddins is an engaging, charming, intellectually exciting writer who executes his mission almost by sleight-of-hand.

His pal and “Road” movie series co-star, Bob Hope, may be better remembered now for his efforts entertaining U.S. troops abroad, but at home during World War II it was Crosby—just beyond draft age himself—who was the king, jester and knight errant.

Giddins is an engaging, charming, intellectually exciting writer who executes his mission almost by sleight-of-hand. The detail is encyclopedic, but imparted painlessly; his arguments are irresistible, made with an uncanny combination of passion and critical objectivity. Giddins harbors enormous affection for Crosby, and a certain awe at both his accomplishments and his humility, but he is hardly oblivious to the man’s flaws. Over the two volumes, he debunks most of the details in the unfortunate image of Crosby as a cruelly abusive father (perpetrated by one troubled son, contradicted by others) and portrays his subject as a man capable of enormous kindness and generosity. But as friends, acquaintances and even family members recall, he was a person no one was truly intimate with, not after the 1933 death of his one real confidant, the jazz guitar genius Eddie Lang. One could only get so close to Crosby emotionally, which couldn’t have done much for Dixie.

Perhaps Giddins’s most virtuosic act of criticism—which contains its own generosity and honesty—is in his treatment of Crosby’s history with blackface. As much as any other single white entertainer of his time, Crosby used his star power to champion integration on the bandstand and in movies. At the same time, he harbored a nostalgic affection for the tradition of blackface, something rooted in his hero worship of Al Jolson and earlier “minstrels,” like the 19th-century entertainer Daniel Decatur Emmett, whom Crosby portrayed in the 1943 film “Dixie”—and in which he played several scenes in blackface. While hardly excusing the practice, Giddins puts it in historical perspective, as a show-biz genre so widespread that it almost—almost—became divorced from race. It has also rendered several Crosby movies like “Dixie” and the enormous hit “Holiday Inn” unprogrammable on television today, except in severely edited form.

'Can it Be?' The Christmas pairing of Bing and Bowie
Joseph McAuley

But Crosby’s timing was perfect—not just musically, which is something Giddins certainly knows a bit about, but in terms of a place in history. Radio, which dominated the ’40s, was ideal for Crosby. He was bald (hence all the hats), colorblind (hence the mismatched wardrobe) and, as regards his big flapping ears, he used to say his head looked a taxi cab with both doors open. He was not made for our visual world, but he ruled his own, its music and its media. And when he was big, he got bigger.

No one around him, Giddins wrote at the conclusion of Volume One, “could have imagined in 1940 that everything he had already achieved would be remembered, within a few short years, as merely a prelude to what followed—a bagatelle compared with the symphony of adulation he roused in the 1940s, when Bing Crosby was remade in the crucible of war.” Dramatic, yes, and an implicit promise fulfilled, a short 17 years later.

This article also appeared in print, under the headline “Going His Way,” in the Spring Literary Review 2019, issue.