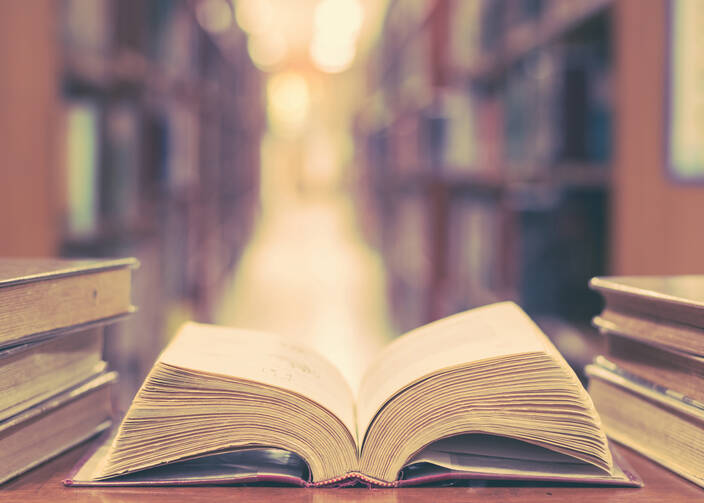 A few months ago I received an unexpected gift in the mail. “Take a look at this quirky book,” read a note from an old friend, attached to Take & Read: Christian Writers Reflect on Life’s Most Influential Books. Edited by Michael Daley and Dianne Bergant and published by Apocryphile Press in 2017, it is a collection of 45 essays by figures well-known in the American theological community who were asked to pick one book that particularly inspired or influenced them.

The title made me a bit suspicious at first. “Is this just going to be 45 essays on Augustine’s Confessions?” I wondered. (Only two were on Augustine, I confess, and they were immediately followed by Gerard Mannion’s selection: The Communist Manifesto.) Instead, I found a broad range of books, from memoirs to novels to historical biographies, and the explanations offered for each provided intriguing insights, with the possible exception of the fellow who picked a book by Friedrich Schleiermacher. He, I thought, must be a real gas at parties. Yet, as Daley notes in his introduction, each of us treasures some books that could never grow boring to us, because “our lives are testaments to the power of a book.” Amen.

As Michael Daley notes, each of us treasures some books that could never grow boring to us, because “our lives are testaments to the power of a book.” Amen.

With this Spring Books literary issue, we present authors and books that our contributors recognized as such treasures (or not). It is an eclectic grouping. Readers who enjoy a review by William Woody, S.J., of two new books in French that he thinks might augur a Catholic intellectual renaissance for the “eldest daughter of the church” may be less interested in my review of four books about Bob Dylan. Then again, Dylan fans might find much to savor in Gregory Wolfe’s review of Denis Johnson’s final collection of short stories, The Largesse of the Sea Maiden (Johnson died in 2017), as Dylan and Johnson seem almost kindred spirits.

Cultural critics are well-represented in this issue, folks we would like to feature more of in the future. First we offer a profile by David Michael of the prolific Alan Jacobs, author of How to Think (among many other writings), and later a review by Christiana Zenner of the latest book from another public intellectual, Stanley Hauerwas: The Character of Virtue: Letters to a Godson. Politicians from two different eras also appear: Woodrow Wilson and Jimmy Carter. America’s Executive Editor Maurice Timothy Reidy reviews Patricia O’Toole’s hefty biography of Wilson, The Moralist, and Betsy Shirley of Sojourners reflects on Carter’s new memoir/apologia, Faith: A Journey for All.

‘Of The Making of Books There Is No End’: a survey of our Fall Literary Review 2017
James T. Keane

Original poems by Meg Eden (“Ruins Ekphrasis”) and Kwame Dawes (“The Spindle & Yarn”) appear, and Nick Ripatrazone offers a longer appreciation of poetry in his review of Traci Brimhall’s latest book, Saudade. The work of a visual artist, the Rev. William Hart McNichols, is also featured in a review by Michael Tueth, S.J. of his new book of icons, Image to Insight, a reminder that icons are “read” at the same time they are viewed and venerated.

The first book review America ran in 1909 was of Mark Twain’s novel about Joan of Arc, so it is with special delight that we bring you Ted Gioia’s reflections on Twain’s interest in the French saint.

The very first book review America ran in its inaugural issue of April 17, 1909, was of Mark Twain’s novel Personal Recollections of Joan of Arc, so it is with special delight that we bring you Ted Gioia’s reflections on Twain’s interest in the French saint. Gioia’s reflections are joined here by two other looks back at important books and authors. Robert Hosmer remembers Muriel Spark’s classicThe Prime of Miss Jean Brodie, and Lisa Ampleman revisits a childhood favorite, Madeleine L'Engle’s A Wrinkle in Time (now a somewhat-bowdlerized major motion picture).

In addition, our frequent contributor Jon M. Sweeney offers a review of new books on Judaism that Christians would do well to read. Sweeney, who is married to a rabbi, argues that “every Christian needs a better understanding of the Jewish origins of his or her faith.”

Finally, Executive Editor Kerry Weber reports that reading with her young son can be a case of the wheels going ’round and ’round, but in a manner most illuminative.