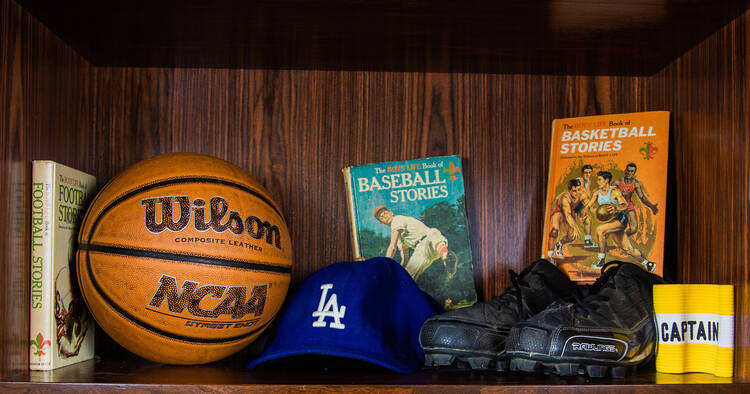 Growing up Gen-X, my siblings and I experienced childhood without digital technology as a fact of life. We got our first personal computer in 1985 (the TI-99/4A, which Texas Instruments sold off for $100 a pop after discontinuing the model in 1984) when I was 11 years old, and even our television was just a box with rabbit ears and 13 channels well into the 1990s. Suffice it to say we all spent a lot of time reading books.

These books are easily found online and in used bookstores. Re-reading them as a middle-aged man was in part a trip down memory lane (though I was no athlete, and Lord knows I was no Boy Scout) but also a lesson in cultural pedagogy: These books and others like it were quite clearly designed to educate a certain class of white American male into the virtues of postwar civic culture—for better and for worse.

Re-reading the Boys’ Life sports anthologies as a middle-aged man was in part a trip down memory lane (though I was no athlete, and Lord knows I was no Boy Scout).

Boys’ Life magazine has been published continuously for over 108 years, and despite its target audience of boys between the ages of 6 and 18 and its middlebrow reputation, those 11 decades of publication have included some surprising authors and illustrators. Ansel Adams, Norman Rockwell and Salvador Dalí have all been featured in the magazine; so, too, the fiction of Isaac Asimov, Catherine Drinker Bowen, Ray Bradbury, Arthur C. Clarke, Alex Haley and R. A. Heinlein. For three years in the late 1960s, Bobby Fischer wrote a chess column for the magazine.

(Movie buffs may recall one of the best scenes in the 1980 movie “Airplane!”, in which a nun is shown reading Boys’ Life; nearby, a boy is reading a similarly sized magazine, Nuns’ Life.)

The story collections were inexpensive when they first came out. A November 1966 advertisement in Boys’ Life offered the three sports books (as well as seven others in the “Boys’ Life Library,” books on horses, mysteries, outer space and more) for $2 apiece by mail—less than $16 each in today’s dollars.

The stories are wholesome to a fault, clearly designed not to offend a soul. No one drinks alcohol, and no one uses drugs or smokes, other than the dads who tamp down their pipes while reading the evening paper. There are no divorces, no single-parent families.

Almost every character in the books is designed to appeal to an obvious target audience: athletic, middle-class, white teenage males. The locales are Anytown, U.S.A., with names like Riverville and Centralia and Oceanside. Everyone has a nickname, some of them quite funny: Pop Weasel, Barrel Buna, Hard-Luck Hagerty, Baby Bunting and Army Armstrong. The dialogue is squeaky clean, even when depicting open arguments (“‘You’re handing me the old baloney,’ Johnny cried”; “‘Watch out, buster,’ he taunted.”)

Many of the stories still held their charm 35 years after I first read them. In The Boys’ Life Book of Football Stories, “Master Mind” by B. J. Chute tells the tale of Irish Mehaffy, a morose but telepathic high school fullback; it is as clever and funny now as when it was published in 1963, full of a sportswriter’s moxie but undergirded by a sly sense of humor and irony. Others are also remarkably well-written, with careful pacing and character development. There are also literary allusions that would bounce miles above a young reader’s head today: In William Heyliger’s “Too Much If,” from The Boys’ Life Book of Basketball Stories, one of the boys draws his locker room taunts from the lyrics of Rudyard Kipling.

Almost every character in the books is designed to appeal to an obvious target audience: athletic, middle-class, white teenage males.

Across all three volumes, there are two typical protagonists: the team captain/star who must learn valuable lessons about leadership, or the underdog/benchwarmer/runt who turns out to have the heart of a lion (or a secret skill). The moral lessons tend to be fairly straightforward throughout: Play fair. Own up to your mistakes. If given the chance for personal glory or team victory, choose the team. Pass first. Love God and your family and your hometown and your country.

In Andrew Hall’s “Talking Turkey,” from The Boys’ Life Book of Football Stories, a Thanksgiving weekend football game is preceded by a quick meditation that makes almost all of the above explicit. “At breakfast next morning Ike bowed his head in real thanksgiving. ‘Thank you, Lord, for my good family, my fine community, and my beautiful country. Amen.’” His son Peeps then leaves for practice:

And Peeps, loping along to the gym, found himself thinking of the many families that made up the community, of the many communities that made up the country, and he knew he was proud to be part of it. He somehow pictured families getting together to eat turkey and cranberries and pumpkin pies, but first of all to bow their heads and give thanks for their wonderful country. He guessed that was what Thanksgiving meant.

Other times the dialogue offers a more ambiguous lesson, as in this lecture from a basketball coach to his rebellious, skeptical player in “Too Much If”:

The moral lessons tend to be fairly straightforward throughout: Play fair. Own up to your mistakes. If given the chance for personal glory or team victory, choose the team. Pass first. Love God and your family and your hometown and your country.

What is missing from these stories? Women (mostly), minorities (almost entirely) and poverty. While it is obviously an easy dunk to point out another culture or era’s blind spots from afar, the absences in these stories stand out almost as starkly as what is present. When women do appear, they are mothers who cook apple pies and worry that Spud did not have second helpings at supper. Younger women are sisters and girlfriends who provide conversational foils for the male protagonist’s eventual epiphany.

African-Americans are similarly invisible, with the exception of one story. In “Tournament Team,” from The Boys’ Life Book of Basketball Stories, a coach engages in longstanding racial stereotypes many readers of the time probably would not have noticed: “Ken has the peculiar combination of coordination and grace and rhythm that Negro athletes often have.” Ouch. Other minority groups never appear at all.

Poverty is also strangely missing from almost every story, where instead solid two-story brick homes and single-income households are the norm. To overcome adversity in these books is a personal matter, not a struggle against economic disadvantage; a certain level of comfortable prosperity is a given. An exception to the norm is “Lobsters Don’t Make Champions,” from The Boys’ Life Book of Basketball Stories, in which the protagonist comes from an area of town “not looked upon with any envy by the people of Oceanside” and has to miss extra practice because he helps his father lay out his lobster pots (best story in the book).

To overcome adversity in these books is a personal matter, not a struggle against economic disadvantage; a certain level of comfortable prosperity is a given.

The World to Come

Another fascinating and troubling benefit of hindsight is that we now know the world that the readers of these books in the mid-1960s would soon enter—a world rather more complicated than many of the whitewashed pieties might suggest. Would a kid ruminating on Peeps’s Thanksgiving meditation in 1963 know that within the year Bull Connor would be unleashing police dogs and fire hoses on civil rights activists in Birmingham, Ala., people who might not “give thanks for their wonderful country” because of memories of cranberries and pumpkin pie?

Or did a young man in 1966 read the story above about a coach who said “there are times when you must work with enthusiasm for the man in command”—and then learn that lesson himself under siege two years later in a hellhole like Khe Sanh? And a 13-year-old boy reading about Fastball Fitch in “Beanbrain,” from The Boys’ Life Book of Baseball Stories (1965), would have entered college at the same time as the young men and women killed at Kent State.

Did a young man in 1966 read the story above about a coach who said “there are times when you must work with enthusiasm for the man in command”—and then learn that lesson himself under siege two years later in a hellhole like Khe Sanh?

In reality, the readers of these stories in the 1960s were entering a world nothing like that of Barrel Buna or Hard-Luck Hagerty. Many would fight in a foreign war under a draft that made them a number, not an aw-shucks star; all would see their country rent in two over social conflicts; many would (hopefully) realize that fictional places like Centralia and Riverville exist only because places like Watts and Newark actually do exist.

Why the Catholic Church cares about sports
Patrick Kelly

Good Sports: Getting closer to God through athletics
Martin Siegel

So what does it mean that I first read these books in the mid-1980s and took such joy from them? Or that today, at 44, I find many of them still charming, once I get past the cringes?

This recently concluded March Madness made it clear once again that so many of us just love a good, old-fashioned sports story, where the underdog wins or the hero learns something new. Is there nothing to be learned, nothing new under the sun?

This article also appeared in print, under the headline “Revisiting Childhood Favorites,” in the Spring Literary Review 2019, issue.