The Prim Presbyterian: the life of Woodrow Wilson 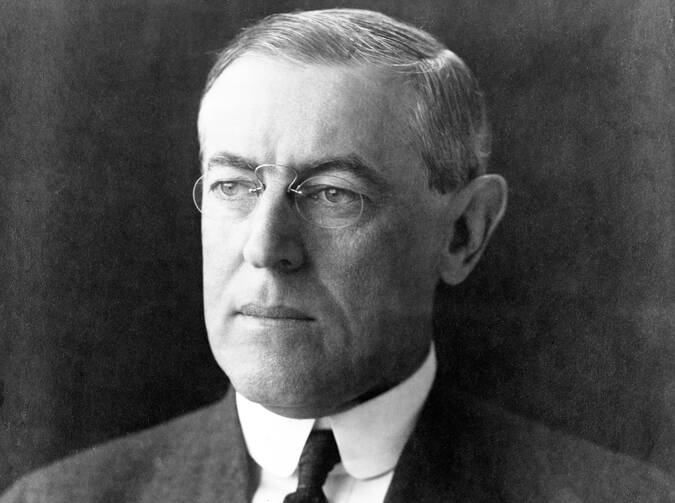 Woodrow Wilson was an unlikely president. A university administrator and a public intellectual before the term was coined, he was drafted into the race for governor of New Jersey in 1910. Two years later, through the fortunes of circumstance and timing, he would win the presidency. His was a life full of ironies and surprises, one that stretched from the ashes of the Civil War to the halls of post-World War I Versailles. It is no wonder he remains an attractive subject for biographers.

The Moralist by Patricia O’Toole

A great strength of Patricia O’Toole’s new biography is the argument announced by her title. She sets out to investigate Wilson by focusing on his strong moral streak, an attribute that proved to be his greatest asset and his greatest failing. If we still live in “the world he made,” as O’Toole’s subtitle suggests, it is because of the moral force of his intellect. His famous Fourteen Points helped redefine the landscape of postwar Europe and still shapes foreign policy today. Yet that same moral streak could curdle into stubbornness, and it proved especially damaging when he was faced with U.S. legislators who did not share his grand vision.

Wilson was a child of the Civil War (his father was a chaplain for the Confederacy), and growing up he encountered former soldiers maimed by battle, an experience that shaped his views on war. He attended Princeton University, and later returned as a professor after a stint at Bryn Mawr College. (O’Toole wryly remarks that “he had no interest in preparing women for larger roles in the world.”) He was named president of Princeton in 1902, and proved to be an able administrator. His one losing battle was against the wealthy “eating clubs,” where students dined and partied. But even if he failed to diminish their influence on campus life, his fight against the clubs helped shape his image as a reformer willing to fight the wealthy classes.

Years before he took up residence in the White House, Wilson wrote that the presidency would remain a “minor office” unless the president played a greater role on the world stage. It was a prescient insight that would be proven by his own term in office. Elected as a progressive reformer, Wilson would be remembered as a war president who sent U.S. forces to join the Allied cause.

O’Toole’s account reminds us Wilson sent troops to fight many times before World War I, all in Latin America. He dispatched U.S. forces to Cuba, Haiti, the Dominican Republic, Panama and Honduras and presided over two calamitous interventions in Mexico. “I propose to teach the South American Republics to elect good men,” he once remarked. It was a declaration of hubris that would be repeated, in one way or another, by presidents throughout the 20th century.

O’Toole’s account reminds us Wilson sent troops to fight many times before World War I.

Wilson was the antithesis of his predecessors, Theodore Roosevelt and William Howard Taft, men with large appetites and creative facial hair. Wilson was the “prim Presbyterian,” O’Toole writes, a man whose face was “all angles and planes.” Unlike the larger-than-life Roosevelt, he avoided strong men and preferred dining with a few trusted advisors over entertaining congressional leaders. “He showed no interest in mastering the arts of friendship, collaboration, and disagreement,” O’Toole writes.

O’Toole is particularly good on Wilson’s emotional life. He was a man of “volcanic temperament” who avoided confrontation and preferred the company of women. Indeed, he could not live without sustained female companionship. When his first wife, Ellen, died during his first term in office, he was deeply distraught and hoped at one point that he would be killed. Just over a year later, he married again, to Edith Bolling Galt, who would come to play a notorious role in his presidency.

Wilson was a president of firsts: the first (and so far only) president to hold a doctorate; the first to hold press conferences; the first to appoint a Jewish justice to the Supreme Court (Louis Brandeis). He also scored some major legislative accomplishments, including the introduction of the federal income tax and the creation of the Federal Reserve. In O’Toole’s estimation, no Democratic president in the 20th century save Franklin D. Roosevelt achieved more.

Wilson is remembered less for these achievements today than for his failures on the question of race.

Wilson is remembered less for these achievements today than for his failures on the question of race. O’Toole makes it clear he was no hero in that regard. A Democrat, he was reluctant to alienate the Southerners who helped put him in office. Wilson was supported by African-Americans who believed his progressive agenda would lead to new freedoms. Instead, the new administration would end up segregating the civil service in exchange for Southern votes on economic reforms. It was not a shining example of moral leadership.

Wilson won by a slim margin against the Republican Charles Hughes in 1916, and before long the United States declared war on Germany after years of neutrality. Even though Wilson had been quick to send troops to Latin America, he was reluctant to send a much larger number of troops across the ocean. After the United States entered the conflict, the war effort at home was waged with impressive efficiency. One of the best chapters in the book deals with “The Right Men,” who raised money through war bonds and helped mobilize the feeding of Americans at home while exporting food to Europe.

The war also allowed some men to gain dangerous powers, notably the postmaster general, who, emboldened by the new Espionage Act, targeted publications that criticized the war. In several instances, he revoked discounted mailing rates, effectively shutting a publication down by forcing it out of business. America was one of many publications that were required to submit each edition to authorities in Washington for review. Some of these excesses can be blamed on Wilson’s underlings, but O’Toole also finds Wilson guilty himself, citing a series of speeches starting in 1916 that stoked suspicion of immigrant groups and proposed an odd idea of patriotism. “In a novel construction,” O’Toole writes, “the good American was no longer the citizen who revered freedom but the one who refused to tolerate those who disagreed with their government.”

For many in Europe, Wilson was a hero who rescued them from their German aggressors.

In January 1918 Wilson delivered the speech for which he would become famous, laying out the Fourteen Points he hoped would guide peace negotiations with Germany. It was a sterling example of Wilson’s gift for oratory and a highlight of his presidency, surpassed perhaps only by the large crowds that greeted him in Europe when he arrived for the peace conference just over a year later. For many in Europe, he was a hero who rescued them from their German aggressors.

Wilson would never rise to such heights again. A man who preferred to give speeches rather than negotiate, he was not cut out for closed-door diplomacy. A president who avoided his Republican opponents in the Senate was now sitting across the negotiating table from Georges Clemenceau, prime minister of France, and David Lloyd George, prime minister of Great Britain, men with far more experience in the rough and tumble of politics. The European leaders, for their part, did not know what to make of Wilson and grew “impatient at having little sermonettes delivered to them.”

Wilson’s grand hope for the peace conference was the League of Nations, an international body that could help settle disputes and thus avoid another world war. The proposal for the League made it through the contentious negotiation process at Versailles, but the terms of the peace were much harsher than Wilson had originally hoped for. When he returned to the United States, he was confident Congress would approve the Treaty of Versailles, but congressional leaders were ready for a fight. The Republicans controlled Congress for the first time in Wilson’s presidency and ultimately refused to approve the treaty without some reservations. Congress was skeptical of the League: they did not want to be dragged into a foreign war that did not have any bearing on U.S. interests. Wilson refused to negotiate.

Why do we remove some statues and not others?
Matt Malone, S.J.

Why was he so intransigent? O’Toole makes the convincing case that his deteriorating health played a major role. Wilson suffered a series of strokes in his last years in office, including a major one in October 1919 that was largely hidden from the public. Much controversy has surrounded the questions of who knew what when, but there is little doubt his wife played a large role. Surely, too, did Wilson’s own ambition, which never flagged. After leaving office in 1921, Wilson still held onto the hope that he would be nominated by the Democrats in 1924. Though it is hard to believe, when he died in 1923, he was working on two speeches: one accepting the nomination, the other his next inaugural address.

O’Toole’s epilogue on the “Wilsonian Century” is a master class in political analysis, showing how the force of Wilson’s ideas resounds to the present day. If Wilson deserves credit for some very good ideas, like the League of Nations, he also deserves blame for very bad ones, notably the idea that patriotism requires the unquestioning loyalty of the citizenry. That toxin still pollutes the body politic today.

This article also appeared in print, under the headline “The Prim Presbyterian,” in the Spring Literary Review 2018, issue.