The spiritual curiosity of Traci Brimhall 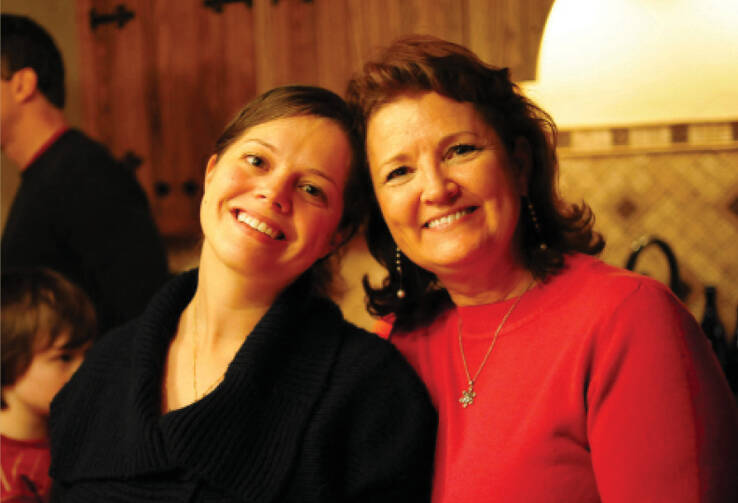 Traci Brimhall and her mother, Marilyn Brimhall, in 2010 (photo courtesy of Julie Beers)

In “Fiat Lux,” a poem from Traci Brimhall’s 2010 debut collection Rookery, a narrator’s young sister “cradles the dead chickadee she found/ on the porch.” She asks her older sibling “what ate the bird’s eyes”—an ominous opening to a poem titled with a line from Genesis. “Ants,” the narrator explains, “knowing the soft ocular// cells are the easiest way into the red feast of heart,/ liver, kidney.” When the ants consumed the bird’s eyes, they could imagine the world from above: a “blue bowled sky,” soybean and sunflowers, and “a bear loping/ across a gravel road.” Yet their vision soon fades, and “they twitch in their sleep, trying to make out the distant/ boatman lifting his lantern, his face disfigured by light.”

The poem captures Brimhall’s talents and quirks. She is a poet of discrete scenes, a storyteller. Her narratives move along unusual routes, and yet their endings feel inevitable. Her second book, Our Lady of the Ruins, depicts a postapocalyptic world that feels downright Gnostic, as with lines “we meet a priest who pulls a rope/ of thorns through his tongue to make his mind/ pure enough for a vision.” Brimhall tells me in an interview she has “always loved the Gnostics because I love questions. A lot of the messages I received growing up were not to question God, to have an unshakable faith.” The questions she asked were not demands for answers, but a “curiosity about the sacred.”

Such curiosity comes through in Saudade, her most recent book. Set in the small towns of Brazil, the book’s poems and plays in verse depict superstition, ritual, gossip and the strange experiences of communities both afraid of and in awe of God. Miracles and transformations abound. Camera crews descend on towns where God, or the devil, seems to have made an appearance, but “only when the film crew/ leaves do the dead reappear, drinking, dancing, whipping each other/ with TV antennas.” The divine and mysterious remain a local secret.

“I think the body is so often where so much of God is understood,” Brimhall says.

In Brimhall’s vision of Brazil, Catholicism is a faith that marries the sensual and the sacred. This is a doctrine where the body is central: in symbol, in liturgy, in Christ. The narrator of one poem, “Virago,” speaks: “I lie there resigned as a messiah// at his crucifixion while men come with money and troubles/ to ask for forgiveness, for mercy, for the secret to finding// the road to El Dorado.”

“I think the body is so often where so much of God is understood,” Brimhall says. “My body is how I know so much, so it makes sense to me that that’s my metaphor. My body is how I experience the literal and so it also becomes a way to experience the metaphysical, for the imagination and the abstract to manifest as aches and stirrings, as a tightness in the throat or a sinking of the stomach.” In Saudade, bodies are places of sin and salvation—alive or dead, they carry the symbolism of relics.

Brimhall’s poetry has always been interested in a surreal, unique take on sin and salvation. Born in 1982, she studied poetry at Florida State and Sarah Lawrence and earned her doctorate at Western Michigan University, where she edited Third Coast magazine. Originally from Minnesota, she now lives in Kansas and teaches at Kansas State University.

Saudade grew out of the stories told by her Brazilian-born mother, a woman who lived in a Catholic world but was not Catholic herself. “Certainly she would have said she was Christian, but I don’t know that she would have claimed a denomination,” Brimhall explains. Growing up, her family changed churches often—or more precisely, “church homes.” Brimhall says her “mother was looking for something she could never find among these fellowships. She’s not here anymore to answer for why, but I’m pretty sure it was just love she was looking for.” Her mother “wanted to find God’s love in people—that big, all encompassing, unquestionable force.”

Brimhall told me in an interview that she “was always drawn to churches that had more ritual, probably because we changed churches so much and ritual felt like something reliable. I still enjoy rituals and often create them. I love the return to something familiar, but also how it lets you recognize changes within yourself at the time you’re returning to that ritual.”

Those varieties in spiritual practice also made Brimhall interested in rapture: “Not the end times kind of rapture, but the way people seemed to experience the sublime in a crowd. I don’t. My best experiences with the sacred have always been alone, but I did feel a kind of awe watching people speak in tongues or cry and raise their hands, completely overtaken. It also made me feel deeply unchosen and unwanted by God.”

That dissonance—between an all-embracing God and an exclusive congregation—led to Brimhall’s continuing tension with certain approaches to belief. “A student recently said to me, ‘faith is not a couch.’ And I agree. It’s also not a high horse. Helmut Thielicke said ‘Faith is a struggle or it is nothing,’ and I like that.”

For Brimhall, poetry "isn’t a way to arrive at answers, but a way to sit in mystery and increase my own sense of possibility.”

Because she appreciates faith as a struggle, it is no surprise that she has been “drawn to Catholicism”—though she is not Catholic herself. “It’s also because I’ve always wanted to be a good person, and I thought if I was a nun I definitely would be. And I also watched ‘Sister Act’ a lot as a kid, so maybe that had to do with it.”

The act of poetry, she said, “isn’t a way to arrive at answers, but a way to sit in mystery and increase my own sense of possibility.” She is drawn to other poets who have channeled questions into inquiries, and inquiries into prayers. Rainer Maria Rilke’s blend of the sensual and the sacred appeals to her, and she thinks his “descriptions of the sublime are so deeply embodied.” Other writers of doubt and faith have also moved her:

Some of Anne Carson’s work, like The Book of Isaiah. Much of the work of Li-Young Lee. Jericho Brown’s The New Testament. And especially the early work of Katie Ford. These are writers who’ve written about Christianity, though one of my more heretical views is that God does manifest everywhere, and there are writers of many faith traditions that I admire and enjoy.

The notion that God is in all things is a sentiment that moors Saudade—and a feeling that raises each earthly action to transcendent and mysterious significance. “Idyll, or Impossible Epithalamium,” appears late in the book, and begins: “We know the end is near. Rumors reach us/ of the seeds smuggled, and other rubber barons/ begin hoisting their grand pianos on steamboats,/ loading their opera glasses and linen suits in trunks.” Something is coming. Is it the rapture? Or the rapturous fires in our own souls? Still, “our story’s conclusion seems so far away in these afternoons/ when I sell taxidermied piranhas to tourists.” The narrator’s mind wanders in wonder, prefiguring the lines of the book’s final poem: “If you want/ to know what I long for, I’d say a world of my own// making where changing destinies is a phrase away,/ where everything is true but retreats when you try/ to touch it.”

Brimhall sees the importance of Christ’s messages of forgiveness and sacrifice, yes, “but also I’ve always understood that God needed to walk among his creations. It was important that Jesus hungered and struggled and was angry and tempted and afraid.”

She has “believed that God understood more about humans after Jesus. I realize that’s not a popular idea, but it has made me believe that my experiences are important to God, too. That God is in me, so the way I experience the world, the way I feel and act in this beautiful meat tube my soul is in, is the way God knows more of the world.” There’s a poetic exchange between the human and divine:

Attention Must Be Paid: The observational power of 'Poetry
Karen Sue Smith

It has mattered to me to believe my experiences are of use to God, and that being awake to the world and feeling deeply is also a way of being of service. Often those moments when I am really alert to something in the world, I have that feeling in my chest of my soul waking up. I almost feel a physical stirring.

Saudade takes the wild beauty of faith and brings it to earth: hills, dust and most importantly, into the bodies we inhabit. “My experiences with the sacred have often made me feel like my soul was trying to escape the body, and that has been both sublime and terrifying,” Brimhall explains. “And yes, I am human, and so I want both to be true. I love rapture and that feeling of being lifted out of myself, but also, I like eating and running and holding my son in a rocking chair while he falls asleep with his head against me and I can feel his breath on my neck and his twitches when he starts to dream. What a beautiful way to know the world and to know love, these weird and fallible and wanting bodies.”

This article also appeared in print, under the headline “The Spiritual Curiosity of Traci Brimhall,” in the Spring Literary Review 2018, issue.