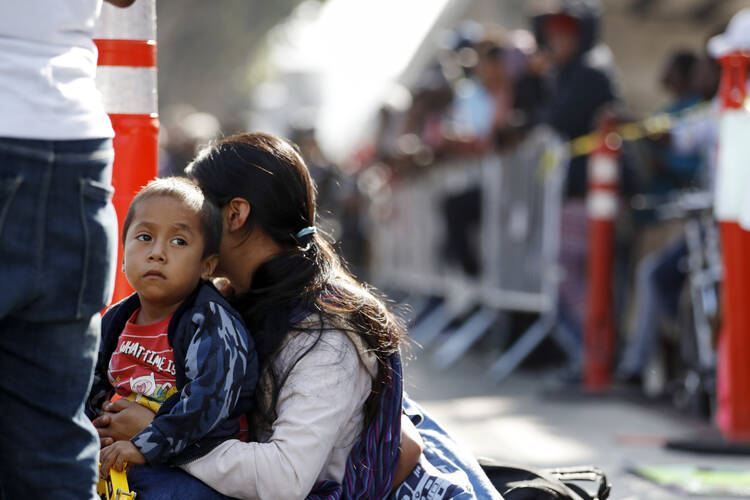 In this July 16, 2019 file photo a woman sits with her sons as they wait to apply for asylum in the United States along the border, in Tijuana, Mexico. (AP Photo/Gregory Bull, File)

Crowds of supporters rejoiced in the streets of New York, Philadelphia and Washington after media outlets announced that Joseph R. Biden Jr. would be the 46th president of the United States. In a shelter in Ciudad Juarez, just south of El Paso, Tex., migrants broke out into applause and chanted: “Biden! Biden! Biden!”

Mr. Biden’s election will unquestionably lead to many changes, and migrants and asylum seekers hope the incoming administration will have a kinder approach to immigration.

“There has been a constant drumbeat of rhetoric against communities of color and immigrants,” Dylan Corbett, the executive director of the Hope Border Institute in El Paso, Tex., said of the Trump administration. “What you see [with the election of Mr. Biden] is a collective sigh of relief.”

Many migrants have been waiting on the U.S.-Mexico border for months for asylum hearings, he said. “Among migrants, there’s a change in demeanor and a renewed sense of hope,” Mr. Corbett said. “There’s a sense that change can happen.”

In a shelter in Ciudad Juarez, just south of El Paso, Tex., migrants broke out into applause and chanted: “Biden! Biden! Biden!”

“The [Biden] administration needs to seize this moment for generational change, especially in terms of immigration,” Mr. Corbett said. “And we need to hold [the new administration] accountable.”

“There are a lot of things that need to be done,” said Ashley Feasley, the director of migration policy and public affairs at the U.S. Conference of Catholic Bishops. She listed a number of items the Biden administration could address by executive action, including:

On his campaign website, Mr. Biden vowed to address all of these issues and more in his first 100 days. Both the Obama and Trump administrations took executive action on immigration because of congressional impasse, Ms. Feasley said.

“We don’t know the makeup of the Senate, and only Congress can [create] a path to citizenship,” she said. Some reforms to the current immigration system may not be possible.

Donald Kerwin, the executive director of the Center for Migration Studies in New York, echoed Ms. Feasely’s sentiments, noting that he does not expect comprehensive immigration reform to pass without a change in leadership in the Senate. But comprehensive change may not be the best approach, he said, suggesting reform efforts address specific populations one at a time.

Family-based immigration, T.P.S. recipients and essential workers could each be treated separately, for example. Even seemingly minor changes, like lowering immigration-related application fees, would help a lot. Local governments can also do more to address immigration, Mr. Kerwin said.

“It’s more effective to talk about a strong legal immigration system, to talk about groups to be legalized, starting with DACA recipients,” he said. The Center for Migration Studies is hosting its annual academic symposium on migration tomorrow, and speakers will address a range of issues facing the incoming administration, from refugee resettlement to border enforcement.

Changes by executive action will also face barriers in court, he said. “I don’t think people understand the extent of the damage of the Trump administration’s policies,” he said. “I think the administrative policies will take years and years to undo.”

“I don’t think people understand the extent of the damage of the Trump administration’s policies. I think the administrative policies will take years and years to undo.”

Mr. Kerwin noted the public charge rule, which makes it much more difficult for legal immigrants to get green cards in the United States. “It all can be done, but they’re going to have to be intentional about it,” he said. “A lot of issues get crowded out because of Covid.”

Mr. Kerwin expects the new administration to be a major change from the Trump administration, which he described as having “a basic hostility to immigration.” Mr. Trump’s rhetoric about immigrants and asylum seekers often missed the mark, he said, and his supporters “took a lot of what he said as Gospel.”

“We’re not talking about an elite class,” Mr. Kerwin said. “We’re talking about immigrants trying to make a life for themselves.”

The Biden administration will also have to address deep-seated xenophobia and racial prejudices, according to Mr. Corbett. “Racism and white supremacy are not over with the election,” he said.

“White supremacy is real and Trump really reinvigorated something that has been a part of this nation’s history,” he said, noting the mass shooting in an El Paso Walmart. The gunman in that attack specifically targeted Latino shoppers, killing 23 people. “There’s still a lot of work to be done.”

Both Republicans and Democrats are responsible for current immigration policy, Mr. Corbett said. He noted Mr. Biden’s contrition during the final presidential debate, when he admitted to mistakes made during the Obama administration. “It took too long to get it right,” Mr. Biden said then.

“We have to go further,” Mr. Corbett said. “We can’t just focus on reversing the Trump executive orders. We have to work for transformational change. We need to build a new system from the bottom up. And we have to make a policy that addresses the drivers [of migration], especially in Central America.”